Blind Granny and her kind 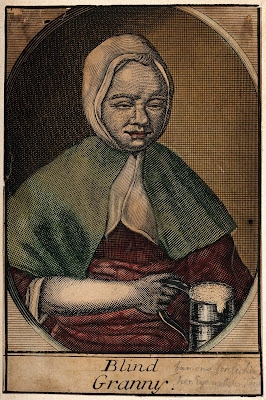 “Blind Granny” with her tankard. Wellcome Library no. 16500i

A new exhibition Reframing disability has opened at the Royal College of Physicians in their spectacular building on the south-east corner of Regent’s Park. It includes items selected from a collection of prints ranging from the 17th century to the late 19th century showing people with congenital physical abnormalities or disabilities. The Wellcome Library has similar items, and for many of them the new research in the exhibition catalogue (by Carole Reeves, Julie Anderson and Bridget Telfer) has enabled the Wellcome Library catalogue entries to be upgraded with new information.

One example is “Blind Granny”, who is shown above. Her real name is unknown, but her claim to fame was that she could wipe her blind eye with her tongue, a trick she would perform in exchange for a tankard of beer. She was portrayed from the life by the mezzotint artist John Faber (c.1660-1721), from whose portrait many copies flowed as people took away mementoes of her unusual feat of contortion. Other prints show giants and dwarfs, conjoined twins, and people with paralysed, deformed or missing limbs, including one of an armless Swedish woman, Magdalena Rudolfs Thuinbuj (b. ca. 1612), whose star turn involved firing a pistol with her toes. The prints have been in the College for many years, but not catalogued until now, and their origin is lost in time: their original collector is unknown. In addition to the prints, the college has a painting of the dwarf and painter Richard Gibson (1615-1690), apparently after a lost painting by Lely, which is also on show.

But the exhibition of the historic pictures in Reframing disability is part of a larger project. With SHAPE (an organization that works to improve access for disabled people to arts and cultural provision) the Royal College of Physicians gathered a focus group of people themselves with different kinds and degrees of disablement, from different places and professions; invited them to discuss the historic prints; and created new colour portrait photographs of the participants, with their own commentaries, for comparison and contrast with the historic items. This invited a stimulating clash of contexts: it comes as something of a shock to turn from the black and white prints produced by (in many cases) Georgian publishers for their market, to the colour photographs of our contemporaries, accompanied by their own voices. One striking similarity with the historic disabled is that many members of the focus group are also engaged in arts and entertainment (acting, writing, photography, music).

As the accompanying book explains, specialists in the field identify two models for discussing disability: the “medical model”, which sees the disabled as patients to be cured of a physical problem, and the “social model”, in which society has a problem in making the good things in life available for people with certain physical conditions. As so often (“art” and “science” being another example), the study of history shows up this dichotomy as to some degree an artificial schism created by language. The historic “social model” against which many of the people in the historic prints are portrayed was really one in which they could use their abnormality to make a living, in some cases (Richard Gibson for example) a very good living: far from being excluded from society, they used their talents to join in with society’s exchange of goods and services, though even the successful shared the pitfalls of show-business. The “medical model” tends to assume that the scope and character of medicine is unchanging through the centuries, and that medicine is uniform at any given time, neither of which would be admissible for historians. Many of these abnormal people lived in times when the patient could be in charge.

The medical term for Blind Granny’s abnormality is apparently macroglossia, which simply means in ancient Greek the state of having a long tongue. Perhaps that really is the “medical model” – use of a language in which many of the College’s Fellows in former days would have been at home – though it could be argued that it simply places medicine among the professions, many of which (the law, the military, statecraft, architecture, etc.) have their own jargon and claim ancient forebears.

But the fact that the Royal College of Physicians is hosting the exhibition in its Modern Movement building (right), and has adapted that Grade 1 listed building to allow disabled access, shows that even “medical models” are not exempt from change over time.