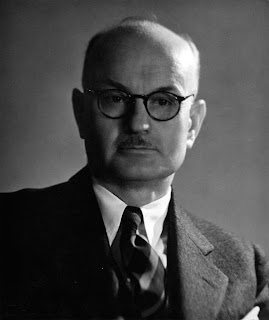 Recently made available to researchers is a small collection of material relating to the career of U.S. behavioural psychologist, Edward Chace Tolman(1886-1959). The material was collected by Professor W. G. Leytham, biographer and former student of Tolman, and as a result contains significant information on Tolman’s life, long career at the University of California, Berkeley, and the influences he had on his students.

Tolman is famous for his study and experiments on learning in rats using maze techniques. This is touched on in two files of reprints (PSY/TOL/2/5-6) in the Tolman collection. However, of particular interest may be file PSY/TOL/1/9, comprising copies of a questionnaire completed by former students, containing their (highly complimentary and admiring) views, reminiscences and anecdotes relating to Tolman the teacher and the individual. There are notable insights in this file (as well as in files PSY/TOL/1/3, 1/4 and 1/8) regarding his resolute stance against signing the Loyalty Oath imposed by the University of California. Unwilling to adhere to anything that infringed upon academic freedom, Tolman became one of the victims of the McCarthyite ‘witch hunt’ era, being dismissed from his position as Chairman of the Psychology Department in 1950. He became leader of the ‘non-signers’ in the university and took legal action against the Loyalty Oath ruling. He was ultimately reinstated a few years later, after the California State Supreme Court held that the oath, prescribed by the University of California Board of Regents, was illegal.

The Tolman papers form part of the archive collections of the British Psychological Society, currently deposited with the Wellcome Library, Archives and Manuscripts. Other material relating to Tolman is housed by the archive repositories of the University of Akron, Ohio, and University of California, Berkeley.