Inner visions of a twilight world

As already noted here, the exhibition Watercolour at Tate Britain (until 21 August 2011) has a section on Watercolour and War, in which a spectacularly gruesome painting by Charles Bell (1815) from the RAMC Muniments Collection is the earliest exhibit, on loan from the Wellcome Library.

After that, anyone in search of less violent subjects can find them in the next room, devoted to Inner vision. Here the works exhibited show how visionary artists, who seek to capture the fleeting figures which haunt their own imagination, have turned to watercolour for its speed of execution and variety of effects. William Blake, Simeon Solomon, Dante Gabriel Rossetti, Edward Burne-Jones (with the largest watercolour in the exhibition), Frederick Cayley Robinson, and the Welsh poet David Jones are among the artists whose unearthly, hallucinatory paintings inhabit this gallery. Quieter and more contemplative, but no less intense. 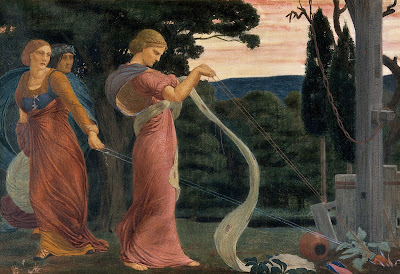 Gouache by Robert Bateman. Wellcome Library no. 44691i.

Among them is another work on loan from the Wellcome Library: a gouache painting of witches plucking mandrakes by Robert Bateman (1842-1922). Botanist, landscape gardener and Italian scholar, Bateman was the leader of a group of British Pre-Raphaelite and Aesthetic painters who appeared in the 1860s under the auspices of the Dudley Gallery in London. His taste for exotic flora was inherited from his father James Bateman (1812–1897), the orchid-maniac who founded the gardens of Biddulph Grange in Staffordshire, now open to the public in the care of the National Trust. It contains gardens in ancient Egyptian, Himalayan and Chinese styles.

The strange atmosphere of Biddulph Grange finds an echo in Robert Bateman’s depiction of the mandrakes. The mandrake is associated with many legends. Mandrake was said to grow beneath gallows, in a spot where the urine or sperm of a hanged man has fallen to the ground. When uprooted, it utters a shriek so powerful that it can kill people standing too near. There are male and female mandrakes, and infertile women can become fertile by consuming a male-shaped mandrake. A chapter of Sir Thomas’s Browne’s Pseudodoxia epidemica, 1646, was devoted to these folk-stories (book II, chapter VI).

Bateman’s painting shows witches standing at a distance to pull up a mandrake growing near the foot of the gallows. It illustrates Walter Cranes’s characterization of the Dudley Gallery school as “a magic world of romance and pictured poetry … a twilight world of dark mysterious woodlands … veiled in a dim and mystic light”. Crane described Bateman’s work as “weird and powerful” (weird meaning supernatural).

The transition from Medicine and War to Inner Vision at Tate Britain reprises an earlier exhibition in which Bateman’s gouache was exhibited: the 1913 exhibition of the Wellcome Historical Medical Museum and Library at Wigmore Street, London, initially for visitors to the International Medical Congress (June-October 1913) and subsequently to the public. This exhibition, whose centenary will arrive in two years’ time, was the occasion on which the private collection started by Henry S. Wellcome in 1880 became a permanent institution opened to outsiders, and was the precursor to today’s operations of the Wellcome Library. 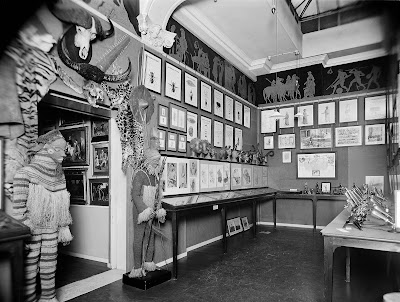 At Wigmore Street in 1913 the cautious visitor had to step through a gallery lined with watercolours not of war but of epidemic diseases: deadly mosquitoes depicted by Amedeo Terzi lined one wall, engravings of bubonic plague the neighbouring wall — all still in the Wellcome Library today. If visitors traversed the length of this gallery and had the courage to carry on, they would have had to step between two African witch doctors and go through a door above which were what the catalogue describes as a “trophy of animal and human weapons of offence and defence”: the skin of a tiger on one side and a leopard on the other, the horns of a buffalo or similar, the skull of a big cat, the sword of a swordfish, and other edifying naturalia. (Click on image above to see the details.)

Once past those, they were in a narrow gallery with an unusual collection of watercolours. 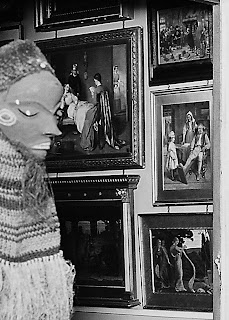 The first painting in the bottom row will be recognized as Bateman’s gouache of witches plucking mandrakes. The two paintings above it are apparently no longer in the Wellcome Library. The painting showing a man with his broken leg in a splint is described in the handbook [1] as “Kind enquiries by J. Hayllar”: there was a family of painters called Hayllar based in Bloomsbury, of which James Hayllar (1829–1920) or his daughter Jessica Ellen Hayllar (1858–1940) may be the author of this painting. Where is it now? It fits Jessica’s description of her father’s work as “subjects to bring the poor and well-to-do together, kindly acts and interest shown in various ways” (Oxford dictionary of national biography). It would be ironic if it were a work of Jessica’s, as from about 1900 she was confined to a wheelchair as a result of a traffic accident.

The painting above the Hayllar was catalogued as “The arrest of the alchemist [by] Pierre Deville, 1907”, which has not been identified, nor has the painting in the tabernacle frame on the lower left, catalogued as “The magician by Professor Delbake” (possibly Charles Alexandre Debacq, 1804-1853). 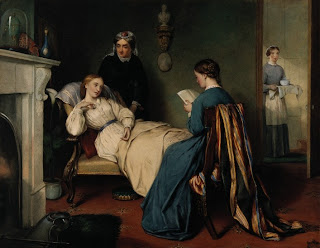 The painting above that one is catalogued as “The convalescent” without an attribution: it is however still in the Library, and is another fine exhibition-watercolour, signed by the Victorian artist R.H. Giles (right: Wellcome Library no. 18206i). Giles lived in Gravesend in Kent, and exhibited at the Royal Academy and elsewhere for the fifty years 1826 to 1876. Thanks to the darkness of this corridor, it still preserves unfaded its original lustrous colours.

In the quiet of this narrow space, the visitor to the Wigmore Street gallery in 1913 could obtain a temporary respite from the more didactic or overbearing exhibits. There will be fewer quiet episodes in 2011 at Tate Britain, with its larger galleries and immense flow of visitors, but the splendid variety of paintings is more than enough compensation. To mention just two examples, Richard Dadd’s bizarre watercolour entitled by him “The child’s problem”, is rarely on display, while among the earlier exhibits, Lucas Horenbout’s portrait of King Henry VIII, on loan from the Louvre, provides a temporary remedy for the usual absence outside Great Britain of both this portrait and Holbein’s portrait of the king (the latter being in the Thyssen collection in Madrid).

One Response to Inner visions of a twilight world