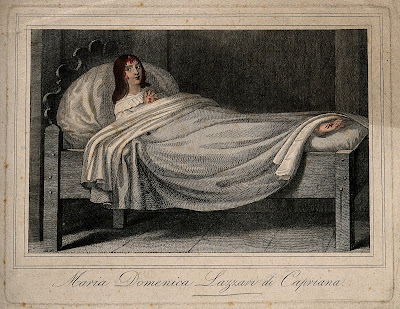 The previous posting introduced the two stigmatics of the South Tyrol and described the visit of T.W. Allies and his two companions to one of them, Maria Domenica Lazzari, in July 1847. Allies’s letter concludes with these observations. [1]

“The points in her case which are beyond and contrary to nature are these :
1st. For thirteen years she has neither eaten nor drunken, except that very small portion of the Host which she receives once or twice weekly.
2d. On the hands and feet, inside and outside, she bears the wounds of our Lord; both sides run with blood; whether the wounds go through is not known; and on the left side is a wound which runs also.
3d. She has on the brow, as I saw and have described, and I believe all round the head, the mark of the crown of thorns; a series of punctures, and a red line as if of something pressing on the head.
4th. All these wounds run with blood at present, and during thirteen years have done the like, regularly, and at an early hour on Friday, and on that day alone.

Combining the first and fourth fact, we get a phenomenon which sets at utter defiance all physical science, and which seems to me a direct exertion of Almighty power, and of that alone. “Medical men,” said Signor Yoris, “have been in abundance to see her, and have studied her case; but no one has furnished the least solution of it.” He assured me he had seen the wounds on her feet a hundred times, and that the blood flowed upwards towards the toes, as we saw it did on the nose. Since for the last two years she has been contracted and drawn up by her disease the feet cannot be seen. She has refused to allow any man to see the wound on the side, as it did not require to be medically treated; but offered that any number of women, of her own village, or the wives of medical men, might see it. She is a good deal emaciated, but not so much as I have seen in other cases. Nothing can be more simple and natural than her manner and that of her sister. Their cottage is open at all times. Domenica may be closely seen, all but touched and handled. Indeed around that couch one treads instinctively with reverence; the image of the Woe surpassing all woes is too plainly marked, for the truth of what one sees not to sink indelibly on the mind. No eye witness, I will venture to say, will ever receive the notion of anything like deceit.”

Allies then proceeds (pp. 136-140) with an account of his party’s visit to Maria von Moehrl. 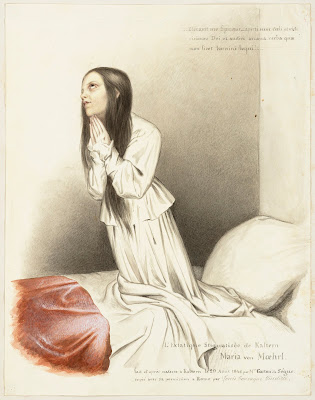 “VISIT TO L’ESTATICA
We returned to Neumarkt on Friday, and on Saturday morning, July 31st, walked nine miles to Caldaro, to see the other great wonder of the Tyrol, Maria Mörl, called the Estatica. On arriving, we presented the Bishop of Trent’s letter to the dean, and in about an hour, were conducted to the Franciscan convent; from this one of the friars conducted us to the monastery, within the enclosure of which, but only as a lodger, Maria Mörl has withdrawn.

The main points in her history are these. She was born in October, 1812; she lived from her earliest years a life of great piety; about the age of eighteen, in the year 1830, she suffered violent attacks of sickness, in which medical aid seemed to be of no service. At this time she began, after receiving the Holy Communion, to fall into trances, which were at first of short duration, and scarcely remarked by her family. On the Feast of the Purification, 1832, however, she fell after communicating into an ecstacy lasting twenty-six hours, and was only recalled by the order of her confessor. In June, 1832, the state of ecstacy returned every day; in August of the year 1833 it became habitual. Her ordinary and habitual position is kneeling on her bed, with her hands joined under the chin, her eyes wide open, and intently fixed on some object; in which state she takes no notice of any one present, and can only be recalled by her confessor charging her on her vow of obedience.

But I may now as well describe what we saw. In a few minutes the friar had taken us to the garden door of the monastery; we entered a passage where he left us for a short time, and returning, told us to open a door which led into a bedroom; I opened another door, and found myself, before I expected, in the presence of the most unearthly vision I ever beheld. In a corner of a sufficiently large room, in which the full light of day was tempered down by the blinds being closed, Maria Mörl was on her knees on her bed. Dressed entirely in white, her dark hair came down on both sides to her waist; her eyes were fixed intently upwards, her hands joined in adoration and’ pressing her chin. She took not the slightest notice of our entrance, nor seemed to be aware of our presence at all; her position was considerably thrown forward, and leaning on one side; one in which, on a soft bed especially, it must have been very difficult, if possible, to remain a minute.

We gazed at her intently the whole time we were allowed to remain, about six minutes. I could see a slight trembling of the eye, and heaving of the frame, and heard one or two throbs, but otherwise it would have seemed a statue, rather than anything living. Her expression was extremely beautiful and full of devotion. Long before we were content to go, the friar intimated his impatience. I asked him to cause her to pass out of her ecstacy, and recline on the bed. He went near to her and spoke a few words in a very low tone; upon which after a slight pause, she slid, in an indescribable manner, down from her kneeling position, her hands remaining closed together, and her eyes wide open, and her knees bent under her, how I cannot imagine.

She is said to spring up again into her former position, as often as her state of ecstacy comes upon her, without disjoining her hands; and this we should have liked to see, but the friar was urgent that we should leave, and we accordingly obeyed. The sleeves she wore round her wrists prevented our being able to see whether the stigmata were visible, which she bears on her hands and on her feet. The Bishop of Trent afterwards told me we should have asked the confessor to order her to show us the former. These were first observed in 1834.

Now, though what we saw bears out the accounts given of the Estatica so far as it went, yet I must admit that we did not leave her with that full satisfaction we had felt in the case of the Addolorata. Maria Mörl’s state in its very nature does not admit the bystander to such perfect proof as that of Domenica Lazzari. Had we remained half an hour or an hour instead of six minutes, it must still have been a matter of faith to us how long these ecstacies continue, and how often they recur. None but those who live daily with her can be aware of all her case. I can only say that what we saw was very strange and very striking, and when the Bishop of Trent informs us, as he did, a few hours ago, that these trances continue four or five hours together, I must entirely believe it. He had seen the stigmata on her hands, and she had rendered him, as her superior, the same obedience which she gives to her confessor.

If I may venture to draw any conclusion from what I have seen, it is, that it appears to be a design of God, by means of these two young persons, to impress on an age of especial scepticism and unbelief in spiritual agency such tokens of our Lord’s Passion, as no candid observer can fail to recognise. Neither of these cases can be brought under the ordinary laws of nature; both seem to bear witness in a different, but perhaps equally wonderful manner, to the glory of God as reflected from the Passion of His Son on the members of His Body.
Ever yours, T. W. ALLIES.”

There is no conclusion about Maria von Moehrl comparable to Allies’s methodological remarks about Maria Domenica Lazzari. She appeared less spectacular than Lazzari, her feature being her ability, when in a trance, to kneel at an angle without keeling over – well captured in the watercolour.

What are we to make of these two cases?

The sceptic will see them as, at best, self-harming anorexic young women, and at worst cases of physical and psychological abuse exploited by fraud. At the other extreme is the Earl of Shrewsbury who wrote “A pious fraud so ably conducted would be a greater miracle than those which we see before us”. [2]

One point that the visitors made unwittingly is that the stigmatics, whatever may the cause of their condition, had significant economic importance for their communities. The Earl of Shrewsbury for example made his visit in May 1841 with the Countess and six other people in his party, all of whom needed food and lodging. In his letter dated Munich 27 May 1841 he mentions that a Reverend Mr Swarbrick from England had visited them the previous summer; Prince Lichnowsy had visited in 1839; Lord and Lady Dormer (Joseph Thaddeus Dormer, 11th Baron Dormer of Wyng, was or had been an officer in the Austrian Army) had visited; Monsieur de la Bouillerie had visited; a German physician had visited; and Johann Joseph von Görres (1776-1848), the prominent author then writing his book Die christliche Mystik (1836-1842), had visited Moehrl in 1834 but had not been able to get to Lazzari. The visiting group described in Allies’s book consisted of at least five people: the three Englishmen, Manzoni’s step-son Stefano Stampa, and the latter’s servant; Stampa was on his second or third visit. There seems to have been a constant flow of visitors, many of them affluent.

Shrewsbury illustrated his letter with two etchings of the stigmatics by the painter and Catholic convert John Rogers Herbert (1810–1890), calling it “the accompanying print which is copied from one sold at Capriana.” So prints of Lazzari were also on sale for visitors to buy, and from its similarity to Herbert’s copy it is clear that a print in the Wellcome Library (image at top) is one of them. The brand-names which were used to refer to the stigmatics – L’Addolorata and L’Estatica – also follows best practice in marketing. Therefore, whatever else it might be, stigmatisation can also be the cause of a flourishing tourist business.

However, given that the two watercolours of Maria Domenica Lazzari and Maria von Moehrl which are published here came from Monseigneur de Ségur, it is likely that they came into being not for commercial reasons but for propagation of the faith. Thereafter they descended in the Polish noble family, settled in Belarus, of Dr Andrew Ciechanowiecki F.S.A. They passed from him to the collection of Tim Knox and Todd Longstaffe-Gowan at Malplaquet House, and in 2010 to the Wellcome Library. They are published here for the first time in this Easter week of 2011.