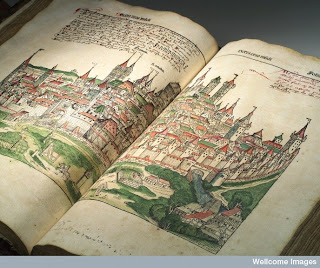 Published in 1493 Liber chronicarum is a history chronicle following Biblical precedent, beginnning with the Creation of the World and ending with the Last Judgement. The largest section however, consists of scenes of contemporary life and contains many illustrations of European cities and countries. As the book was produced in Nuremberg – then the centre of the German book trade – it is not surprising that the city is afforded a double page spread (shown) and that the book is known in English as the ‘Nuremberg Chronicle’.

It was written in Latin by Hartmann Schedel, a physician, though this medical connection is not purely why this copy came into our hands. This copy was purchased by Henry Wellcome in 1898 at Sotheby’s for £20 10s, at an auction of the Library of the artist and designer William Morris.

This copy has been ‘rubricated’ (chapter headings, paragraphs and important words have been highlighted in red) after it was printed. Also, some pictures have been hand coloured and an early owner made copious notes.

In the context of Wellcome’s collecting, this was a major early purchase but one made at a time when Wellcome was as much interested in books which could inspire designs for advertisements for his pharmaceutical business, than artefacts relating to the history of medicine.

Due to the variety of integration between its text and images, the Nuremberg Chronicle has been hailed as the most sophisticated printed book published before 1500. As such, it’s also one of nearly 600 incanabulas held in the Wellcome Library, and one of our most treasured holdings.