Wellcome to the South Pole 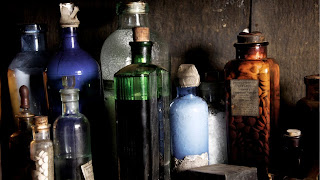 Last Sunday, BBC2 broadcast The Secrets of Scott’s Hut, a documentary which featured presenter Ben Fogle journeying to Antarctica, to observe the work of a team of conservators, attempting to preserve the hut of the explorer Captain Robert Falcon Scott. The hut acted as both accommodation and research centre during Scott’s attempt in 1911 to reach the South Pole. It was then abandoned, leaving behind 10,000 items: the everyday and scientific materials of Scott and his men.

We’ve written before of the connection between Burroughs Wellcome & Co (BW&Co) – the pharmaceutical company co-founded by Henry Wellcome – and Scott’s Antarctic Expedition, so it was nice to see within a few minutes of the documentary, Fogle and two conservators unpacking a surving medicine chest, which included Burroughs Wellcome & Co products. 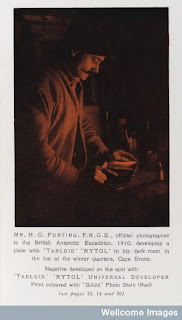 More BW&Co chemicals were visible on screen when the documentary discussed the role of Herbert Ponting, the photographer on the Expedition. To illustrate the importance of Ponting’s role, Scott’s hut even had a dedicated dark room set outside for Ponting to develop his photographs. And there on the shelves of the dark room… developer supplied by Burroughs Wellcome & Co.

The Wellcome Foundation Archives held in the Wellcome Library include more details on the role Burroughs Wellcome & Co played in this and many other expeditions of the late nineteenth and early twentieth century.

The Secret of Scott’s Hut is available on the BBC iPlayer to viewers in the UK until Sunday April 24th.

Images:
– Medicine bottles in Scott’s hut. On the right is Burroughs Wellcome & Co ‘Tabloid’ Liquorice Compound Powder, to soothe upset stomachs. Taken from this BBC Slideshow.
– Advert for ‘Tabloid’ ‘Rytol’ showing Herbert Ponting, official photographer to the British Antarctic Expedition, 1910, developing a plate with ‘Tabloid’ ‘Rytol’ in his dark-room in the hut featured in the documentary (WF/M/PB/25/01/10).