A celebration of Louis Wain’s Cats at Brent Museum

An exhibition of cat illustrations by Louis Wain (1860-1939) has recently opened at Brent Museum, Willesden Green Library Centre, London, NW10. A visit is highly recommended, especially if you are a fan of Wain, cats or the art of anthropomorphism! Wain is one of Brent’s most famous artists, having lived in the local area in the early twentieth century with his sisters and mother in a house on Brondesbury Road.

The Wellcome Library’s Archives and Manuscripts department has contributed to the exhibition two drawings, which originate from the papers of Noel Gordon Harris (1897-1963), presented to the Library in 1985. Harris was a specialist in psychological medicine and early on in his career was appointed to a position at Springfield Mental Hospital, Tooting, South West London. At this time Louis Wain was a patient at the hospital, having been admitted to the pauper ward in 1924, following bouts of erratic and occasionally violent behaviour. It is likely that the two drawings came into Harris’s possession some time between then and shortly after Wain was moved to Bethlem Royal Hospital, South London, around 1925. It is known that Wain often gave away his drawings, which he produced in vast quantities, to friends and acquaintances. 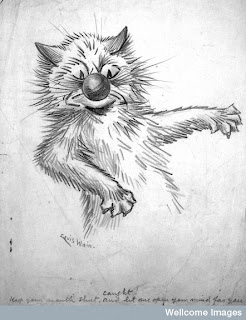 Although such a notion can only be purely speculative, one of the Wellcome drawings, of a rather spiky looking cat, seems to make a dig at the medics who were treating him, captioned by him “Caught! Keep your mouth shut, and let me open your mind for you”. Of course there have been numerous interpretations of Wain’s drawings in the context of understanding his mental health problems. Once considered schizophrenic, more recently he has been thought to have had Asperger’s syndrome and Visual agnosia, which would certainly go some way in explaining his obsessive drawing of cats and the intricate patterns of some of his more ‘kaleidoscopic’ cat drawings. 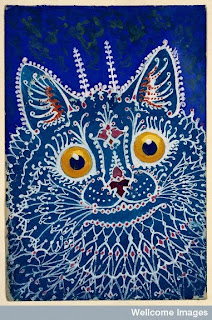 Further examples of the breadth of Wain’s cat images are held by the Paintings, Prints and Drawings collection of the Wellcome Library, comprising two ‘conventional’ humorous images and two ‘serious’ highly patterned images. It is easy to be unnerved by the ‘mad staring eyes’ of the latter cat image, but on the other hand some people may find the whole notion of cats singing, playing cricket or tobogganing much stranger! Whatever our opinions, the therapeutic value of art for patients in medical settings has gained wide credence since the 20th century. The Wellcome Library continues to collect primary and secondary sources on patient art and art in mental illness, two notable examples can be found in the archives of Rudolph K. Freudenberg [PP/RKF] and a soon to be catalogued small collection of Edward Adamson, pioneer of art therapy.

If the exhibition in NW10 wets your appetite then swiftly turn your attention to the Chris Beetles Gallery and the Bethlem Art and History Collections Trust. The Brent Museum exhibition consists chiefly of works loaned by these two organisations.

“Communicating Through Cats: The Art and Mind of Louis Wain”, Brent Museum, runs until 29th October 2011. A series of free exhibition related events will include a talk by Wain biographer Rodney Dale on 23 June.