The great aspirations, dramatic events, heroic deeds and terrible crimes against persons that occurred in France between the first stirrings of the Revolution in 1789 and the end of the First Empire in 1815 remain stamped in the public memory even after two centuries. The Scarlet Pimpernel, A tale of two cities and La Chartreuse de Parme are some of the literary works inspired by this unprecedented episode, and there are innumerable works of history and iconography. Everything that happened in France at that time seems to have a heightened presence -– especially its fine arts, as many brilliant French painters, sculptors, craftsmen and draftsmen lived and died in those turbulent years. 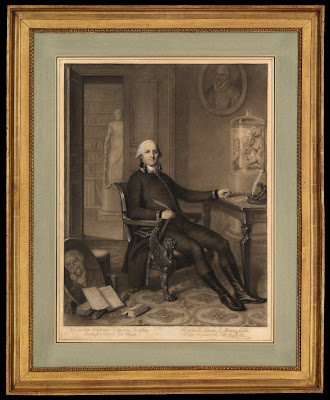 It is therefore a pleasure for the Wellcome Library to be able to acquire a magnificent drawing from that period which has remained unknown until very recently (above). It is a portrait of the French surgeon Ange-Bernard Imbert-Delonnes (1747-1818) by Pierre Chasselat, signed by him and dated in the revolutionary calendar “L’an 8” (1799-1800).

The drawing, without identification of its subject, was discovered by Marc Fecker of the firm of Didier Aaron Ltd. (right), who also carried out independent research in the Wellcome Library in order to re-identify the sitter. 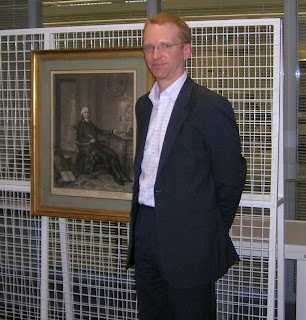 The identity was clinched by the discovery of a rare engraving (Bibliothèque Nationale de France) of the head and shoulders of our sitter, which was copied from the Wellcome Library’s drawing and was published as a portrait of Ange-Bernard Imbert-Delonnes in his lifetime.

Imbert-Delonnes was born at Vacqueyras near Avignon (then in the Papal States) and spent much of his career as a military surgeon, serving under Napoleon at the battle of Marengo (1800). At one time a member of the new French Republic’s Conseil de Santé, he later became the director of the veterans’ hospital in Avignon – now in a different country, France. He died in Paris in 1818. His life and works formed the subject of a doctoral thesis by J. Robert in 1976, but, though Robert’s thesis was well researched, he did not know of this drawing.[1] Robert did however reproduce the engraving in the Bibliothèque Nationale de France which led to the identification of the subject of the drawing.

The drawing shows the lordly figure of Imbert-Delonnes sitting in his study surrounded by mementos of his professional life. In the left background is his scholarly library presided over by a statue of Aesculapius (left). Above right is a portrait of his surgical role-model Ambroise Paré (1510-1590), while a volume of Paré’s works is seen in the lower left corner. That volume leans against another portrait, of a man disfigured by tumours: he was a star patient of Imbert-Delonnes, Périer de Gurat, portrayed for Imbert-Delonnes by Joseph Boze the evening before the operation in which Imbert-Delonnes removed the tumours. On the far right, in a belljar, is a colossal tumour removed controversially from another prominent patient, Charles Delacroix (1741-1805); and neoclassical furniture, about which more is still being discovered. The highlights of white gouache applied to the rendering of the chair represent the hardness and smartness of these magnificent ebony or mahogany surfaces.

Despite the many disparate and in two cases unattractive objects which the patron wished to include in the drawing, the artist managed to provide a coherent portrait of the sitter and his attributes in a lifelike and welcoming setting. Its plethora of detail, secure documentation, and high-quality draftsmanship together make this one of the most remarkable French drawings to have emerged from obscurity in recent years. It has been acquired by the Wellcome Library with the aid of grants from the MLA/V&A Purchase Grant Fund and The Art Fund.

For further details please see the description in the Wellcome Library on-line catalogue and this press release issued by the Wellcome Trust. A further publication by Marc Fecker and William Schupbach will present a fuller analysis of the drawing, its subject, and the episodes which individual details in the drawing refer to.

The drawing is available for viewing in the Wellcome Library, where it joins a collection of some 15,000 portraits of public figures from Greek philosophers and Roman emperors to our own contemporaries.