Today marks the 200th anniversary of the birth of a very famous pair of twins – Chang and Eng. 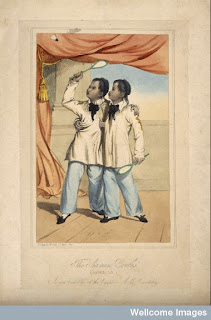 These conjoined-twins are from where the term “Siamese twins” originates. They were born at Maklong near Bankok in Siam of Chinese extraction; they were taken to America and then England in 1829, by a British merchant, Robert Hunter, who with his American partner Abel Coffin, began to exhibit them as curiosities in tours across Britain and America. They caused great excitement and curiosity, and their act included standing still on stage, performing acrobatics and as shown here playing a variation of badminton.

After visiting the principal cities in Europe they returned to America in 1839 and settled as farmers in North Carolina, adopting the name of Bunker and marrying two sisters who bore each of them many healthy children. Over time however, financial concerns – due in no small part to the American Civil War – saw them take to the road again.

In 1869 – on another European tour – they took advice on the possibilities of surgery to separate themselves (the advice was inconclusive). Both twins died on 17th January 1874. Chang, suffering from pneumonia, died suddenly in his sleep; Eng passed away three hours later. 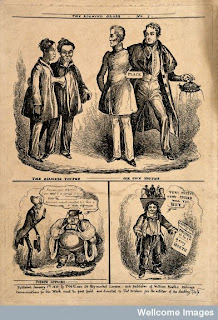 Their fame in their lifetime is indicated by this satirical print from our collections, with the Duke of Wellingtong and Sir Robert Peel being compared to Chang and Eng. For a wider sense of the world the twins inhabited upon the stages of Europe and the United States, our Freak show ephemera captures many of the other speciality “acts” of the time.

Images:
Chang and Eng the Siamese twins, aged eighteen, playing badminton. Lithograph (Library no. 2447i)
Wellington and Peel compared with the Siamese twins (above); a rich bishop and a poor parson; and a street vendor. Etching by W. Heath, 1830. (Wellcome Library no. 12230i)