A lesser-known side of Marie Stopes 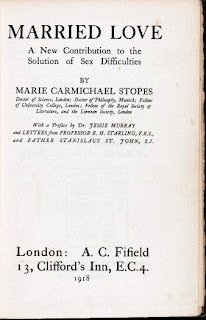 The Library has recently added to the catalogue a copy of Marie Stopes’ little-known first (and only) novel, Love’s Creation, published in 1928 under the rather transparent pseudonym of ‘Marie Carmichael’ (Stopes’ mother’s maiden name was Carmichael and her own full name was Marie Charlotte Carmichael Stopes). The copy was Stopes’ own and is inscribed with her address inside the front cover.

Stopes is, of course, well-known for her best-selling works on marriage and birth control and related topics in sexual enlightenment. A few people have heard of her poetry (which was turned down for publication by Faber, politely but firmly, by T. S. Eliot) or of her plays, several of which achieved production, or of the film, Maisie’s Marriage, which she scripted in order to convey the birth control message to a wider audience.

Love’s Creation, however, remains a unique venture, at least in terms of having actually achieved publication. The copy in the Wellcome Library is a first edition, although it is probably truer to say the only edition as there were no reprints and no demands by publisher or literary agent to produce a successor, since it sold poorly. Neither did it gain critical recognition, being largely dismissed, when reviewed at all, with a brief notice rather than extensive critical discussion. One notice indeed described it as ‘old-fashioned’, and this seems not unjust when we consider that other works appearing on the literary scene in 1928 included Virginia Woolf’s Orlando, Radclyffe Hall’s The Well of Loneliness, and Aldous Huxley’s Point Counterpoint. Mary Abbott, a friend of Stopes, suggested in a letter to her that the furore around Hall’s novel of lesbian advocacy might have had a knock-on impact on libraries and booksellers, making them cautious of anything that might turn out to be scandalous, but this seems rather improbable as an explanation for the popular and critical apathy which greeted Love’s Creation.

Since Stopes was working on versions of the novel that eventually appeared in 1928 for a period of some twelve years, it presumably had some particular personal significance for her, given the many other demands on her time and energies. Although she at one time had considered embodying the ideas about marriage that eventually became her best-selling manual Married Love in fictional form, Love’s Creation does not appear to be the fictional version of her message to ‘young husbands and all who are betrothed in love’.

The novel begins with the arrival of a female scientist in a laboratory previously all male. While one might hope that this might become the largely untold tale of a woman in science, it soon turns into the romance between Lilian and her colleague Kenneth. Shortly after their marriage, Lilian dies in a road accident. A second strand of the plot is the story of her younger sister, Rose Amber, and her disastrous marriage. Meanwhile, the widowed Kenneth throws up his university position in favour of travel for scientific purposes (his experiences very closely mirror Stopes’ as recounted in her Journal from Japan, 1910). Its depiction of the characters and roles of women and men seems strangely conventional given Stopes’ own pioneering career and achievements. It depicts one marriage abruptly terminated by accidental death and one made hellish by the husband’s pathological jealousy (this may well draw on Stopes’ experiences in her first marriage). While the ending promises a future union along the lines set out in Married Love, such an ideal is nowhere presented fictionally within the novel. The story is also, for a realist work, curiously unanchored in history: it is never clear whether the action is taking place before or after the Great War, which is never mentioned. There is also an entire chapter putting forward a ‘large cosmic theory’ through the mouth of Kenneth. Stopes, who was capable of producing non-fictional works which were and are extremely readable and which early readers found compelling, had less success when it came to telling a story.

It seems probable that very few people have ever read this novel: I only did so when I was invited to contribute a chapter on Stopes – ‘Uniting Science and Sensibility: Marie Stopes and the Narratives of Marriage in the 1920s’ – to the essay collection Rediscovering Forgotten Radicals: British Women Writers 1889-1939 edited by Angela Ingram and Daphne Patai (University of North Carolina Press, 1993). It remains, however, a historical curiosity and a sidelight on the complex character of Marie Stopes.

One Response to A lesser-known side of Marie Stopes