A life on (or under) the ocean wave – World Oceans Day

When we think of planet Earth seen from space, the chances are that we think of the colour green. Our planet occupies the comfortable middle ground between the searingly hot silver clouds of Venus and the cold red deserts of Mars: the so-called “Goldilocks Zone”, not too hot and not too cold, in which water can exist in liquid form and sustain life.

Our view as land-dwellers is a biassed one: to a disinterested alien, the main pecularity of our planet would probably be the large amount of blue in its colour-schemes. The presence of liquid water covering much of the planet’s surface is a function of our delicately-poised position in the Goldilocks Zone. Yet, to a land-species like us the ocean is a foreign, sometimes threatening environment, on which we often turn our backs: we treat it as an obstacle, as a food-source to plunder rapidly before returning to land, or at worst as a vast sewer into which we can dump all our various wastes and fondly believe that they vanish. World Oceans Day, taking place in 2011 on June 8th, is an annual attempt to redress this balance; accordingly, today we will seek to highlight some sources in our Library relating to the oceans.

Where humankind goes, sickness and injury follows: so the expansion of Western trade and exploration in the past few hundred years has been tracked by medical men and women, accompanying the voyagers. The richness of our holdings relating to travel is a recurring theme in this blog: our regular talk on Around the World in 100 Years highlights these. We can do no more today than splash in the shallows. Some examples: within the archives department, our manuscript diaries and notebooks allow you to follow Harry Hayter Ramsdale on his long journey to Australia in the emigrant ship Clifton, in 1861-1862: in the course of the journey Ramsdale is pressed into service as the ship’s medical man when the regular surgeon cuts his throat before they are even out of the English Channel, and subsequently delivers a child on board which he suggests should be named after him. We also share his melancholy reflections when, later, a child dies on board and is buried at sea:

I always think that when buried in our native country we do not altogether lose our friends but when buried at sea everything is apparently gone … to become the prey of fishes or perhaps rot in the bottomless or serve as a football to every wave. (MS.5324); 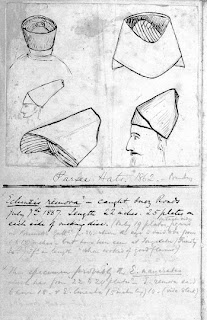 lie at anchor in the Straits of Magellan with the naval surgeon Henry Piers, whose journal of a voyage from Britain to Canada on HMS Satellite in 1856-1857 is held as MS.6110: “Our anchorage at ‘Sandy Point’ was so close to the shore – within half a mile I should think – that we could distinctly hear noises resembling the croaking of frogs &c. and the ripple breaking on the shore…”;

– cruise the Indian Ocean and the shores of Australia with another naval surgeon, Fleetwood Buckle, who records the coastline in a series of delicate watercolours in his journals, part of a large archive held as MSS.1395-1404 and 5656;

– take notes on the natural history of the oceans with John Temperley Gray as he travels on a P&O ship backwards and forwards between Britain and India, at one point pasting the wing of a flying fish into his notebook (MS.5875)

– in the first years of peace after the Napoleonic Wars, voyage to Madras on the East India Company ship the William Miles, whose young surgeon gives us a detailed description of the ceremonies involved in “Crossing the Line” to the southern hemisphere, which turns into the nineteenth-century equivalent of a wet T-shirt competition:

Neptune’s Car (in the shape of a blazing tar barrel) was thrown overboard last evening at dusk, and had a very fine effect… Neptune and Amphitrite went in procession round the quarter deck in their car, attended by Triton and their attendants – chief judge, barber, physician, etc. etc. all appropriately costumed… When the procession was over, the Chief Judge came to the gang way and read out the names of those who had not before obeyed Neptune – and one by one they came up and were delivered over to one of the attendants to be blindfolded – after that they were placed upon a chair and the barber got his lathering brush (a mop) and dipping it into a bucket of a delightful mixture of pitch, grease & other highly odoriferous materials, bedaubed the poor fellow’s whole face most plenteously; then taking his razor made of a barrel iron hoop, scraped it all off very carefully not sparing the foundation on which it lay. The next process he had to undergo was the ducking – for this he was carried to a large tub, and soused & soused & soused again – they then dried him with a large swab, & dismissed him…. When the shaving was over the Captain came out and ordering a bucket stood at one of the ports and belaboured us all with water, as long as he could stand…. The ladies seemed to enjoy the fun very much – in the very midst of their laughing, the Captain went round at one of the ports with a bucket of water, & threw it among them all as they stood in the cuddy, looking thro’ the windows laughing at us – few of them escaped a good wetting…Every one seemed to enjoy the ducking very well, and the ladies more than the men. (MS.7114) 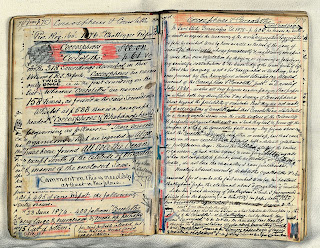 These, of course, are all land-dwellers’ perspectives. What lies below the surface of the oceans was, until recently, as much a mystery as the dark side of the moon: oceanography as we understand it only begins in the nineteenth century. One of the first scientific expeditions to explore the deep ocean was that of the Challenger in 1872-1876, after which the Challenger Deep – the deepest point on the earth’s surface, the very bottom of the Marianas Trench – is named. The Challenger expedition shed much light on what lies beneath the deep oceans that cover so much of the earth’s surface. It was not, however, universally applauded. One of our odder collections is the papers of the doctor and naturalist George Wallich (MSS.4962-4970). Wallich had served as naturlist on an earlier expedition, that of HMS Bulldog in 1860, which surveyed the Atlantic seabed with an eye to the laying of a submarine telegraph cable but brought back natural history data as well. His papers seethe with a sense of grievance, that his priority in observation is being stolen by academic scoundrels: Sir Charles Wyvill Thomson (1830-1882), naturalist of the Challenger expedition, for instance, is always nick-named ‘Weevil’. His notebooks cover matters such as ocean circulation and marine life, but more and more are given over to what he describes as “Dark Chapters”, the tale – in various coloured inks with copious underlinings – of the injustices done to him.

Frightening and mysterious things live beneath the sea but none of them, Wallich might mutter darkly, as frightening and mysterious as scientific plagiarism and deceit. If you want to immerse yourself in Wallich’s mounting sense of persecution, watch the rites of Neptune on the William Miles or share in any of the other oceanic explorations in the Wellcome Library, please set sail for the Euston Road.