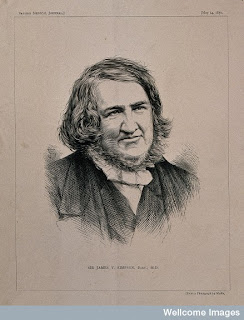 As today is the 200th anniversay of the birth of Sir James Young Simpson, we did think of marking the day by highlighting the works in our collections written by him, which reflect not just his pioneering work in the use of anaesthetics, but also the range of his other interests.

However, whilst considering Simpson’s striking features – his wild hair, his shaggy sideburns – we realised the Library also holds a number of interesting visual portrayals of the man.

Take this one for instance: a photograph of a younger Simpson by the early Scottish photographer, James G Tunny: 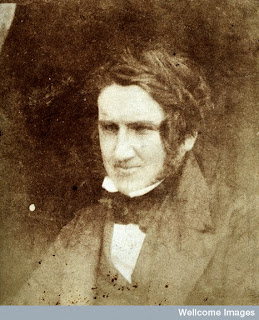 Although undated, other contemporary images of Simpson would seems to date this photograph to the late 1840s, around the time Simpson had started to investigate the properties of chloroform.

The length of time it would have taken to have captured this image of Simpson, is contrasted by an earlier visual depiction in our holdings. This comes from the notebook of an 1830s Edinburgh medical student, Thomas Graham, who in between note-taking during lectures assayed some rough sketches of his lecturers. So, in profile, here we have James Young Simpson, teacher of pathology (alongside Dr James Home and possibly James Hamilton Junior). 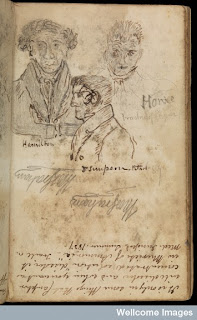 One last illustration of Simpson also depicts his career as a teacher: from 1862, by which time Simpson had been garlanded by accolades, here we have him invigilating an exam, a figure – albeit for comic effect – now grown in size as well as prestige. 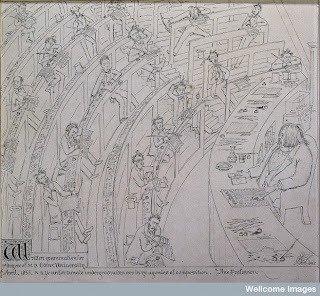 Also shown are the stressed students: “ye unfortunate undergraduates are in ye agonies of composition” runs the text, which reminds us that 7th June may be the anniversary of Simpson’s birth, but it’s also a time of year when students – not just medical ones – are still suffering the torments visualized here.

Sir James Young Simpson is also the subject of a new exhibition at the Royal College of Surgeons of Edinburgh, Surgeons’ Hall Museums.