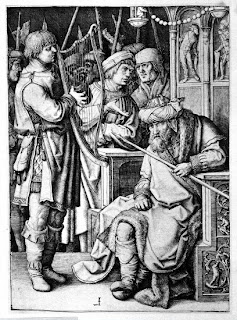 This week is National Music Therapy week in the UK: running from June 6th toJune 11th, and organised by the British Association for Music Therapy (BAMT). Music therapy harnesses the ability of music to express things in a non-verbal way, and thus to bypass difficulties that people may have in expressing themselves verbally: therapists work with a wide range of isolating conditions, from brain damage or neurological disease to autism. More about the therapy, its practitioners and the professional networks that support them can be found on the BAMT’s website.

As a codified, organised discipline music therapy is a (relatively) young one: however, the link between music and healing is an old one, and some of the themes of modern music therapy can be seen in Wellcome Library holdings dating from centuries ago. The use of music to treat depression and mental disturbance is a particularly long-standing practice. In the Old Testament, in the first book of Samuel, we read of how Saul, king of Israel, was tormented by a spirit sent by God, which sounds like periodic depression, and was relieved by music:

And it came to pass, when the [evil] spirit from God was upon Saul, that David took an harp, and played with his hand: so Saul was refreshed, and was well, and the evil spirit departed from him. (1 Samuel 16:23; King James version)

We see this illustrated in the Library’s Iconographic collections, in an engraving made from a painting by Lucas van Leyden (1494-1533). 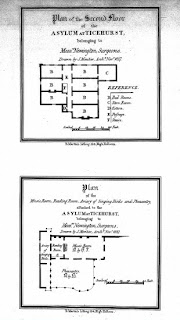 A similar link between music and treatment of mental illness can be seen embedded in the plans of Ticehurst House asylum, a private mental hospital whose extensive papers are held in the Archives and Manuscripts collection: within a prospectus held as MS.6783 we see a large music room, as well as (adjacent to it) an aviary for singing birds, which might have served a similar purpose.

The presence of this therapeutic element in a commercial prospectus designed to recruit paying patients reminds us that music also occurs in the Library in the context of advertising, sometimes in the most peculiar of contexts. It is hard to know, for example, who might be tempted to dance the Painkiller Polka, but the sheet music for this enticing dance appears in our Ephemera collection linked to a full-page late-nineteenth century advertisement for a painkiller. The song occurs in a collection also including the Crutch Polka, as well as jolly numbers about “Morison’s Pills” and “The Vegetarian”, some sung by stars of the day such as Dan Leno or George Robey. 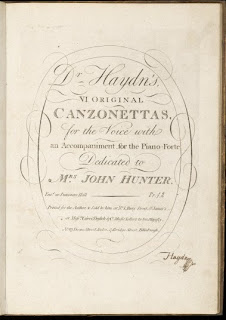 Moving to a more elevated cultural plane, the Library also holds sheet music by Haydn: the Austrian composer, who of course spent some time in London in the late eighteenth century, dedicated a collection of six “canzonettas” to the eminent surgeon and anatomist John Hunter. But the last word, perhaps, should go to an eighteenth-century printed song that links those two staples of medical student life, music and strong drink. It sounds, it must be said, a world away from the songs one normally hears as the pubs close: Mr Monro, the composer or arranger of the piece, gives us two verses set for that rather delicate instrument the flute, and fills his lyrics with classical allusions:

…let’s try to show our selves men of merit,

by toasting those Gods [Apollo and Bacchus: gods of music and drink] in a bowl of good claret,

and then we shall all be deserving of praise;

but ye man that drinks most, shall go off with ye bays [ie, the wreath of victory]. 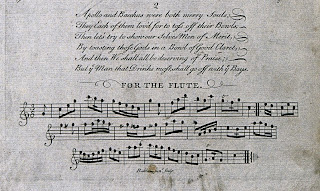 The BAMT website for National Music Therapy week includes the opportunity to record yourself as part of a mass musical improvisation, “Different Grooves”, and upload the results; we take no responsibility for any performances of this little number that may find their way through.