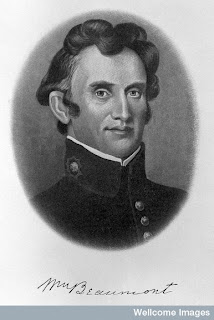 Had not been for an encounter with a fur trapper, it is likely that William Beaumont (1785-1853) (pictured left) would have been just another surgeon in the United States army whose name was lost to posterity. As a result of this meeting, however, Beaumont became the first person to observe human digestion as it occurs in the stomach.

On 6 June 1822, Beaumont – serving in the Army Medical Service in the Upper Peninsula of Michigan – was summoned to treat Alexis St Martin. St Martin was a 28-year-old French-Canadian fur trapper who had been injured by a gunshot blast to the stomach. The initial wound was sizeable – in Beaumont’s words, “more than the size of the palm of a man’s hand”. It gradually healed, but after a nearly a year, small holes (or fistulas) remained in the skin. This meant that Beaumont could move a flap of skin and actually see the workings of St Martin’s stomach.

Beaumont realised that this afforded fantastic opportunities for research, and he even employed St Martin – who was no longer fit to resume his previous work – for a time as his family’s handyman. Beaumont was assigned to different locations through his attachment to the army over the next decade, but he continued his observations of digestion occurring in St Martin’s stomach intermittently in this time.

At a simple level, he removed gastric juices from St Martin and mixed them with canned beef. He also inserted a similar piece of beef tied to a piece of string into St Martin’s stomach, then removed this beef to compare the rates of digestion of both pieces of meat. In later research, he tried inserting different foods into St Martin’s stomach, including vegetables, raw oysters, sausage and mutton. Beaumont discovered that anger hindered digestion – this from the fact that St Martin sometimes, perhaps understandably, became irritable during the experiments…

Beaumont carried out further experiments with St Martin on the rates of digestion and the constitution of gastric juices. In 1833, he published his research as Experiments and Observations on the Gastric Juices and the Physiology of Digestion. This work – which has proved extremely influential – outlined the complexities of the digestive process, describing the stomach in motion and at rest, and even suggested the damage caused to the workings of the stomach by alcohol. 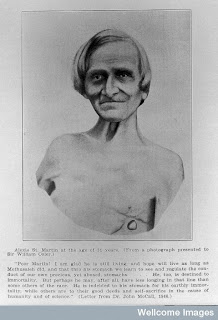 In 1840, Beaumont was able to leave the Army. He became a prominent local doctor in St Louis, Missouri, a job he held until his death in 1853. But what of St Martin? Despite his injuries, he lived to the ripe age of 86 (outliving Beaumont by nearly 30 years).

St Martin’s family were nervous that doctors would want to obtain his body, so they deliberately let his corpse decompose for four days before burying him in an unmarked grave. It was only in the 1960s that St Martin’s descendents disclosed his grave’s location, allowing a plaque to be placed near it. The plaque gives details on St Martin’s life and says that “through his affliction he served all humanity”.

Find out more on the William Beaumont family website.

The work of a 19th century medical officer of health