Working at the Wellcome Library

By William Schupbach | In the Library

This is the time of year when the Wellcome Library begins to host internships and work experience placements for students. Some of them are arranged by schools and universities, while others are organized as private initiatives by the students themselves. The Library owes a great debt of gratitude for the work which these volunteers do, and in return tries to make sure that they learn new things, have interesting jobs to do, and meet some highly-skilled people –- none of them difficult to find in the Wellcome Library. 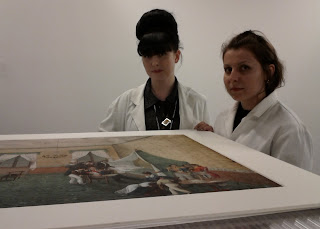 In April, May and June the Library has benefited from the presence of Sophia Selby and Anna Suwalowska (left, left and right respectively, with a watercolour of the death of Napoleon). Sophia is studying Book Arts at the London College of Communication, while Anna is studying Illustration at Camberwell College of Arts: both colleges are part of the University of the Arts London. Both of them helped with the essential work on paintings, drawings, photographs and prints (putting them in to folders and boxes, numbering, organizing, listing and shelving) that has to be done before cataloguing can start, and before photography can then follow. 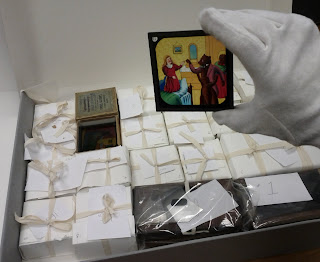 For Sophia an interesting aspect of the work was seeing items transformed as they went through different curatorial stages. A collection of 19th and 20th century magic lantern slides, kept for decades in a filthy brown cardboard box, was transformed into ordered and listed series wrapped in clean packets in a solander box (right, showing Goldilocks being confronted by the bears: click on image to enlarge). Seeing a picture framer completely change the appearance of an old master painting by placing it in a period frame was another dramatic experience.

For Anna, receiving a set of voodoo paintings from the dealer who had discovered them in Benin, housing them in new storage and documenting their locations was just as much of a revelation. For both, a great advantage of working at the Wellcome Library was the chance to see and handle large numbers of historic documents in many media: mezzotints, watercolours, drawings, engravings, lithographs, screen prints and innumerable others. Some of the special items which passed through their hands were Roentgen’s original X-rays from 1895, posters from Russia and the Ukraine, and engravings of Constantinople and the Bosphorus in 1819.

Long hours of foldering and shelving were compensated for by attendance at talks and meetings in the Wellcome Library, and by visits to places outside: a paintings conservation studio, an exhibition at the Royal College of Physicians, an auction at Christie’s and a private view at the Queen’s Gallery at Buckingham Palace, all of which added to the educational value of the internship. Both the Library and the students benefited greatly from the experience, and as one of them said, “I genuinely enjoyed it!”.