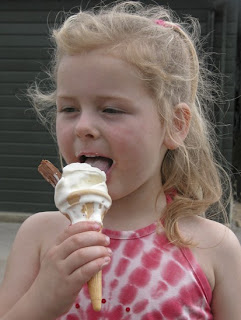 Here in central London it’s another warm, sunny day as a record-breaking dry spring shades into summer. The approach of the weekend, of course, gives the British climate the chance to spring a downpour on us all at the time of maximum inconvenience; but let’s not harbour such negative thoughts. (Let us also, for the moment, put aside the nagging worry about what a long dry spell like this means for climate change.) Let’s focus, instead, on how the weather has turned out perfectly for the UK’s National Ice-Cream Week.

We’ve written many times on this blog about the Wellcome Library’s holdings relating to food: pies, curry (twice: here and here), chocolate, cheese, sausages…. the list goes on. It’s no surprise, then, that ice-cream also features in our holdings. What is special is that, as far as food historians know, the Library holds the oldest recipe for ice-cream in this country – so in a sense National Ice Cream week, the choc-ice, the 99 and the Mivvi all start here.

Our seventeenth-century recipe-book collection (now digitised) is a wealth of food-historical facts, and it’s here that we find the ice-cream recipe: in the recipe book of Lady Ann Fanshawe (1625-1680), MS.7113. Lady Ann was the wife of Sir Richard Fanshawe (1608-1666), a prominent Royalist who had undergone imprisonment and exile during the Commonwealth and was rewarded for his dedication to the Stuart cause, on the Restoration of the monarchy, with the position of Ambassador to Spain. (This was the first permanent resident embassy sent abroad by the English crown: previous ambassadors had been sent as envoys to carry out particular negotiations and had then returned home.) 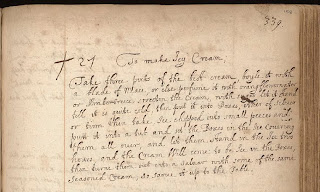 Lady Ann travelled with him and the recipes she compiled show the signs of her Spanish experiences,

with New World products such as chocolate entering her kitchen. A more detailed description of her recipe compilation can be found in an article by David Potter in the the journal Petits Propos Culinaires (David Potter, “The Household Receipt Book of Ann, Lady Fanshawe”, Petits Propos Culinaires, 80 (March 2006), pp. 19–32) within the Library: for now we will focus on one particular recipe, that for ice-cream. It sounds serviceable, although some of the flavouring is a little strange to modern tastes:

Take three pints of the best cream, boyle it with a blade of Mace or else perfume it with orang flower water or Ambergreece, sweeten the Cream, with sugar[,] let it stand till it is quite cold, then put it into Boxes, e[i]ther of Silver or tinn, then take, Ice chopped into small peeces and put it into a tub and set the Boxes in the Ice covering them all over, and let them stand in the Ice two hours, and the Cream Will come to be Ice in the Boxes, then turn them out into a salvar [salver = dish] with some of the same seasoned Cream, so sarve [serve] it up to the Table.

Provided that you have some of the best cream available, there’s a project to try out over the weekend: we will, however, excuse you if you choose to flavour the ice-cream with something more to your taste than mace, ambergris or orange-flower water. We would be remiss if we didn’t point out that ice-cream can be a vehicle for bacteria, and that it should be prepared and stored hygenically. The twentieth-century papers of Sir Herbert Chalke (1897-1979), held as GC/200, include sobering information on potential contamination: for example, his 1939 article “The chemical and bacteriological examination of ice cream samples” (in Medical Officer, 24 Jun 1939), held as GC/200/D/2/6). Wash your hands well. Let’s not end on a negative note, however. Still amongst our twentieth-century papers, we find Sir Weldon Dalrymple-Champneys (1892-1980) (papers held as GC/139) giving in 1951 what is described as the “Inaugural address at the 2nd National Conference of the Ice Cream Alliance” (GC/139/F.19). That’s an organisation that, in the current hot spell, most of us would sign up to.

Images:
1/ Girl eating an ice-cream (British readers will recognise this as a 99; some day, food historians will puzzle over why a cornet with a Flake was called this), from Wellcome Images (N0031317).
2/ Lady Ann Fanshawe’s ice-cream recipe, from MS.7113. (A digitised image of the entire opening can be seen here.)