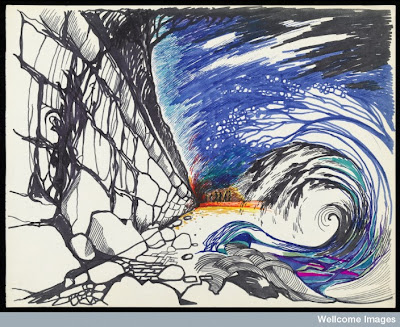 In May 1940, Birmingham schoolteacher and army reservist, Kenneth Davies Hopkins, was captured by the Nazis in France, and sent to a succession of Prisoner of War camps in Germany. Whilst interned he had the idea of recording the dreams of his fellow POWs in order to later analyse them. His interest in psychology had been awakened in the 1930s when his MA Education dissertation had been supervised by C. W. Valentine, who, like Hopkins, was interested in the psychology of dreams

Over the next two years, Hopkins meticulously kept records of the dreams reported to him, using only a pencil and the rough paper he had available to him in the camps. This provides an exceptional record. As Valentine said to Hopkins in a letter dated 8th November 1940 “it would be a unique contribution, as far as I know, to have reports on dreams of prisoners of war while entirely separate from their normal environment”, before going on to suggest that Hopkins look out for “wish-fullfilment dreams, fear dreams based upon war experiences, regression to childish memories, and symbolism in dreams” (PSY/VAL/4/6).

If it wasn’t for this letter, we would never have known of this important resource. In 1945, Major Hopkins’ dream research notebooks were found abandoned in a liberated camp. The letter to Valentine was with them, so the camp liberators forwarded the books to him in the hopes that he could reunite Hopkins with his notes. Unfortunately, Kenneth Hopkins had developed bronchial asthma and emphysema in 1942 whilst interned near Hildburghausen in central Germany, and had died there.

The notebooks remained in the possession of Professor Valentine until they were donated to St. Martin’s College Library, Lancaster, who deposited them on permanent loan with the British Psychological Society. In September 2008, Valentine’s papers were deposited with the Wellcome Library, along with other collections from the British Psychological Society History Centre.

In addition to the Hopkins material, the C. W Valentine archive held by the Wellcome Library includes notebooks created Valentine during observational studies of the infant psyche, drafts of his works Psychology and its Bearing on Education and The Psychology of Early Childhood, both of which are held by the Wellcome Library, along with notes from his university days.

Picture credit: The dream of a patient in Jungian analysis: left, a rocky wall; right a swirling wave; at the end, six people. Drawing by M.A.C.T., January 1971. Iconographic Collections, 658096i