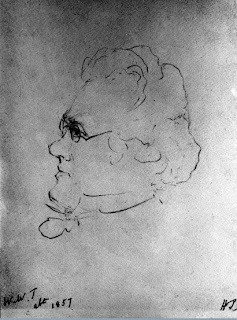 William Makepeace Thackeray, Victorian novelist probably best known for his panoramic work Vanity Fair and its anti-heroine, Becky Sharp, was born in Calcutta on 18 July 1811. While his work does not, on the whole, reflect the medical profession of the day in the way that we find in George Eliot or Mrs Gaskell, or the rising concerns over urban sanitation that inform the symbolic presence of ‘Tom All Alone’s’ in Dickens’ Bleak House, his own life was not without interest from the point of view of medical matters.

His move to England from India after his father’s death, to be cared for by relatives while his mother remained in India with her new husband, with the additional trauma of being sent to a horrible boarding school, is one in a long series of similar accounts which inform us of the hidden costs of Empire to the families engaged in governing it. While the practice of sending children ‘home’ may seem to us cruel and callous, this was considered a necessary precaution against the many diseases and threats to health which were perceived as rife in India and as a manifestation of parental concern, rather than indifference. The emotional effects on the children in question, however, were often devastating. The entry for Thackeray in the Oxford Dictionary of National Biography points out that ‘his recollections of school tyrannies and the terrors of school boyhood show up repeatedly in his fiction’.

Thackeray’s life was punctuated by a number of episodes of serious ill-health. His transition from his public school, Charterhouse, to Trinity College Cambridge was delayed for health reasons. In 1849, while writing his semi-autobiographical novel Pendennis, he suffered a nearly fatal illness (possibly cholera or typhoid). 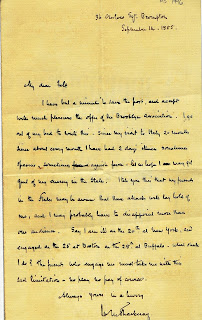 According to a letter held in Archives and Manuscripts (MS.7996), he also underwent an unnamed but serious illness during a visit to Italy in the early 1850s (the mention of recurrent attacks of ‘aguish fever’ leads one to wonder if this might have been malaria, still rife in Italy at that date), that led him to express caution about a projected American trip. In December 1859 and January 1860 he was indebted to the Institution of Nursing Sisters (founded by Elizabeth Fry) for the services of a ‘excellent nurse’ over a period of five weeks: his letter of thanks to the Lady Superintendent (SA/QNI/W.6/2) enclosed an additional donation towards their work.

A few years into their marriage, his wife, Isabella, became severely depressed and attempted suicide. She spent some time in the private asylum in Paris established by the French pioneer in psychiatric medicine, Esquirol. An apparent improvement in her state led Thackeray to remove her from the institution and take her for water treatments at German spas, but this failed to bring about permanent improvement. In 1842 he placed her under the care of Dr Puzin at Chaillot, where she remained for the rest of her life.

This sad state of affairs was an open secret in the literary circles in which Thackeray moved. It was not, however, common knowledge outside those circles and thus scandalised gossip arose when ‘Currer Bell’ (Charlotte Bronte) placed a fulsome dedication to Thackeray in the second edition of her novel Jane Eyre (a much-filmed work of which there is yet another forthcoming new version). Since this novel famously deals with the relationship between a governess and a man whose dark secret is the existence of his insane wife, it was suspected that Bronte’s tale was a roman à clef about her own relationship with Thackeray (who, at that point, she had never even met).