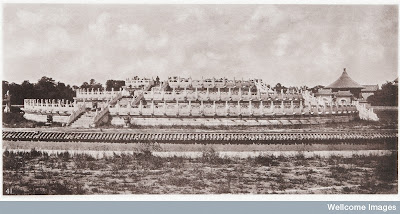 At the weekend we celebrated the 100th anniversary of the birth of the artist and writer Mervyn Peake (1911-1968). Most famous for his Gormenghast trilogy – the story of a hermetically sealed earldom decaying within the seams of arcane ritual – Peake often cited the influence of his childhood in China upon this sequence of novels.

The son of medical missionaries, Peake grew up speaking Mandarin in Tianjin, 70 miles south-east of Beijing. A time of warlords, where travel could still be by palanquin, the wondrous 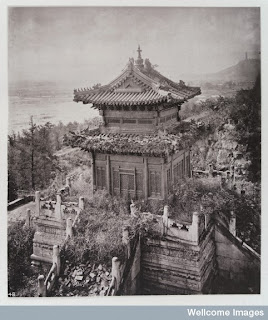 phantasmagoria of his childhood can be glimpsed in the photographs held by the Wellcome Library of the Victorian explorer John Thompson (1837-1921).

For the fancifully minded, the claustrophobic accretion of masonry that is Gormenghast is suggested in the photograph (above) of the Open Alter of Heaven in Beijing, and its crumbling acreage of towers and rooftops seen in the photograph (left) of the ruins of the Old Imperial Summer Palace.

The scope of Peake’s artistic commitment was vast and as an artist he illustrated works from Alice in Wonderland to this study of witchcraft. As the no less fantastical photographs of John Thomson show, the hinterland of Peake’s imagination was rich indeed.

Focusing on history in Hong Kong