Run down, and needing rest and change?

Are you a nerve-exhausted town dweller? Dyspeptic, depressed, anaemic? Trying to think and just getting no response from your brain no matter how hard you press down on the accelerator? 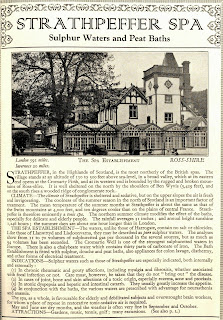 Late July, and schools across the United Kingdom have closed for the summer. Departure lounges and roads to the south are clogged with families heading off on holiday, whilst back in the office even for people without children the atmosphere changes: we may not any longer be bound by the school timetable but prolonged exposure to it in formative years hammers home the message that the six weeks coming up are different in some way. One of the saddest discoveries of starting most jobs is the realisation that from now on, commuting will go on through much of August as well, and one may cling fondly to the idea that there will be at least some form of summer slow-down in blatant contradiction of the evidence.

Well, for most of us the long summer holidays of childhood are gone for ever; but to cushion the blow, we invite you to take at least a short weekend break courtesy of the Wellcome Library. The Library, as regular users will know, is rich in travel writing: wherever humans go, disease and injury follow them, so no matter how obscure a corner of the world one selects, the chances are that a doctor will be there recording his or her impressions. (See our guide to unpublished travel writings in the archives for an overview ; or, for some ripping yarns of medical men going into the unknown, come along to the next running of our “Around the World in 100 Years” Insights Tour.) This posting, however, is intended simply to be a quick weekend break to keep you going until your proper holiday, so we will stay closer to home and allow ourselves to be pampered at a good hotel rather than plunging into the unknown…

One of the frequently-used sources in the Library’s special Quick Reference Area is the Medical Directory (earlier volumes here), of which the library has a long and virtually complete run described in an earlier blog post. As a tool for biography and family history, a means of finding out about individual medical men and women, it is unrivalled. There is, however, a lot more to it: each annual volume represents a snapshot of the medical profession in the UK, listing not merely practitioners but also hospitals, medical societies, benevolent funds, dispensaries … and healing spas. In addition to the official Directory, too, there are advertisements for medical services and equipment, and here again spas and resorts occur. Using this material, we will treat ourselves to a weekend away at a spa in the years between the World Wars.

Spa treatment has been recommended over the years for a huge variety of ailments. In the Medical Directory advertisements, we see it indicated for bronchial complaints, tuberculosis, arthritis, scrofula, sciatica, alcoholism, obesity and constipation – to pluck some conditions completely at random. 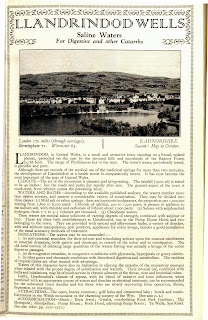 This blog, of course, cannot offer medical advice and we would urge anyone suffering from most of the complaints listed above to consult a doctor – we will concern ourselves with the more general, vague feeling, so common at this time of year, that there are better places to be than at one’s desk.

But where will we go? The range is huge. Health resorts occur in all corners of the country, linked by the thousands of miles of pre-Beeching Report railway (and, despite the founding of the Irish Free State some years before that gave Ireland her independence, the Directory also lists resorts in Ireland, such as Lisdoonvarna in County Clare). Some are spas in the strict sense of the world, growing up around a mineral spring with medicinal value, but others are health resorts in the broader sense, allowing one to relax and recharge in a pleasant environment. Sometimes this is the seaside, sometimes the mountains. Levels of activity vary: in many cases the sedate stereotype of the genteel watering-place is clearly appropriate, but in others it most certainly is not: the Directory lists Blackpool as a health resort, for example, and whilst that may or may not be true even its best friends could never call Blackpool sedate. Climate varies too, from one end of the country to another, and whilst one patient may need a mild climate for another a brisk breeze may be called for. There is clearly the need for an online flow-chart that will take people through the intricacies of choice and work out the precise spa that would be appropriate for someone suffering from lethargy and constipation but able to deal with chilliness and averse to sea-bathing – here, all we can do is set out some examples…

The resorts of the south and south-west, where winter is mildest, are recommended for people struggling to cope with the British climate. Torquay proclaims itself good for “delicate children of Anglo-Indian stock” and Ventnor, similarly, targets “delicate, Indian-born, children, weakly girls at puberty, and … the infirm and aged who have no cardiac weakness.” The adjoining towns of Hastings and St Leonards, meanwhile, boast a winter climate notable for “mildness and equability”: there is “a fine sea-front where invalids can walk, sit or drive almost daily during the winter, and good sea-bathing in summer.” In general, although St. Leonards (to the west of Hastings itself) is less sheltered and “rather more bracing”, the two resorts form “a harbour of refuge for those who are physically unequal to the struggle against the inclement, changeable and sometimes severe wintry weather experienced in other parts of the British Isles.” 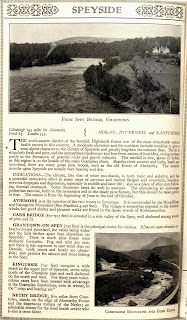 As we all know, that inclement and wintry weather doesn’t have to happen in winter – it can come at any time, as much of June demonstrated! For most of us, however, summer is a time to look for something a bit more bracing. Here the Scottish resorts come into their own; latitude (and in some cases altitude) gives them a cooler climate akin to that some way up in the Alps, with the added bonus of the Northern summer’s long days. Speyside – a chain of small towns centred on Grantown-on-Spey – offers air that is “singularly fresh and pure, and the atmosphere translucent and free from excess of humidity, owing perhaps partly to the formation of granitic rocks…” Further north still, Strathpeffer – Britain’s most northerly spa – makes similar claims: “The climate of Strathpeffer is sheltered and sedative, but on the upper slopes the air is fresh and invigorating…. Strathpeffer is therefore eminently a tonic spa.”
All the Scottish spas offer golf, of course; other physical activities available might include walking on the hills or in the sheltered forests of the Spey valley, tennis or bowls. Permits for fishing can also be obtained (we are in the world of John Buchan and would expect no less) and Nethy Bridge, on the Spey, markets itself particularly to “the tired health seeker who is also a trout fisher.”

It all sounds wonderful and definitely one would expect it to have “a powerful restorative effect in many cases of nervous and mental fatigue and overstrain, insomnia, nervous dyspepsia and depression, especially in middle and later life” (as Speyside sells itself). One must, however, be careful not to overdo it – as Braemar counsels, “It should be remembered that the northern and stimulating air is an incentive (sometimes undesirable) to active exercise”, even if one has been ordered expressly to relax. 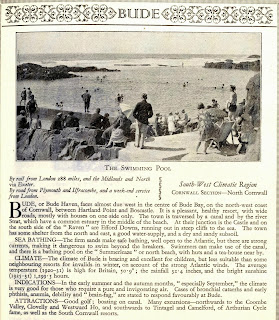 Strathpeffer, as well as golf and walking, offers also the unappetising prospect of the “one of the most highly sulphuretted waters in Europe”, to be quaffed medicinally by the residents. Downing vast stoups of something that tastes like someone else’s used bath-water is, of course, the downside to residence at many health resorts. No such drawbacks await you at Blackpool: the “chief watering place of Lancashire” takes its water externally, on the seven miles of sea-front. Emerging from the sea, one may amuse oneself in all sorts of ways: “the promenades and rock gardens, the covered colonnade and piers…cinemas, tennis, golf, bowling … the children’s playgrounds, sea and motor excursions.” However, as the advertisement coyly points out, “The annual number of visitors and excursionists is believed to be more than five millions, and Blackpool is not an invalid’s resort in the summer season” – which is certainly one way of putting it.

On the facing page, through the random action of alphabetical order, we find the more genteel resort of Bude in Cornwall. Here, there is sea-bathing, and for those unwilling to face the sea the Bude Canal can be pressed into service (built in the nineteenth century to carry fertiliser inland, by now the canal was curtailed to the bottom mile or so: its state today). Facing west, it receives strong Atlantic winds which make it less suitable than some resorts for the physically frail but “In the early summer and the autumn months… the climate is very good for those who require a pure and invigorating air. Cases of bronchial catarrhs and early phthisis, anaemia, debility and ‘brain-fag’, are stated to respond favourably at Bude.”

“Brain-fag” …. we can all relate to that, can’t we? Jeeves, pack our bags and bring the Bentley round to the front; we’re off to to the seaside to recharge the bean.

Images: all from the 1933 Medical Directory.