Sightings of Cayley Robinson in Florence, Paris and Cheltenham

Visitors to the Wellcome Library see in the entrance hall four paintings of the Works of Mercy by Frederick Cayley Robinson. They are allegories embedding the oppositions within themes relevant to the historic mission of hospitals: institutions and individuals, children and adults, interiors and exteriors, civil and military, night and day, etc. They were previously in the Middlesex Hospital in London, and are remembered with affection by many staff members of the hospital and visitors. 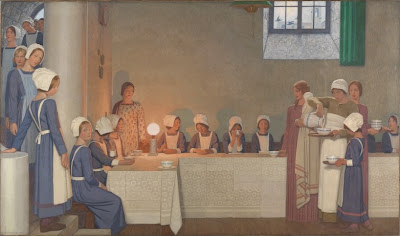 Cayley Robinson’s pictorial ideas were much enriched by his studies abroad. We have a glimpse of him in Florence in Bernd Roeck’s book Florence 1900: the quest for Arcadia. [1] As Roeck points out, Florence in 1900 was of importance as an artistic centre as much for its visiting foreign artists as for its natives. “We should at least mention the three visits that Degas paid to the city, the presence of Maurice Denis during the winter of 1893-4, and the extended visit by the English symbolist Frederick Cayley Robinson, who lived in Florence between 1898 and 1902, engaging chiefly with the work of Giotto, Mantegna and Michelangelo.” Other artists mentioned include Max Klinger, who established the Villa Roxane (home to Max Beckmann, Käthe Kollwitz and Gustav Klimt), and Arnold Böcklin, who lived in Florence and Fiesole for almost two decades. A painting by Cayley Robinson, The Kingdom of the Past in the Fitzwilliam Museum, Cambridge, shows his familiarity with Böcklin’s Island of the dead or with Klinger’s etching of it. [2]

Cayley Robinson is mentioned, in passing and more unpredictably, in the autobiography of the radical campaigner Havelock Ellis (1859-1939), where he appears in a completely different role: as landlord. In 1903 Edith, Mrs Havelock Ellis, “arranged with the artist Cayley Robinson to take his flat in an ancient house on the Quai [de] Bourbon in the Ile Saint Louis in Paris for month of June.” [3] Cayley Robinson had been a student in Paris, and after leaving Florence evidently used a pied-à-terre in that attractive street near the cathedral of Notre Dame (above). 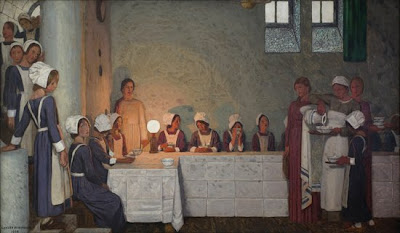 On Thursday 28 July 2011 the auction firm of Chorley’s at Cranham, near Cheltenham, will offer for sale a modello (above) by Frederick Cayley Robinson for the Orphans, one of the four paintings in the Wellcome Library . It comes from the accumulated collection of Tony Haynes, a Gloucestershire art-dealer. The modello (lot 359 in the sale) is signed and dated 1914 in the lower left corner, the same place in which the finished version is signed and dated 1915. Measuring 65 x 111 cm., it is on a scale of 1:9 compared with the area of the finished version (199 x 339 cm).

As might be expected of a modello on this scale, the composition is completely worked out. To work out the composition, Cayley Robinson will have already painted studies on a smaller scale: 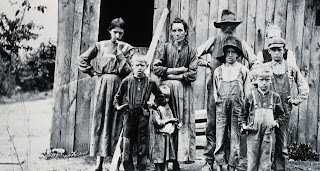 there is a smaller study for the Orphans, measuring 21.6 x 37.5 cm., i.e. 1:9 again compared with the Haynes modello, or 1:81 compared with the area of the finished version. This small preliminary study in tempera formerly belonged to the parasitologist G.H.F. Nuttall (1862-1937), whose collections of photographic prints and lantern slides, aesthetically rather different from Cayley Robinson, are also in the Wellcome Library (example right: a Kentucky family of “dirt-eaters” with hookworm, Wellcome Library no. 750040i). [4] 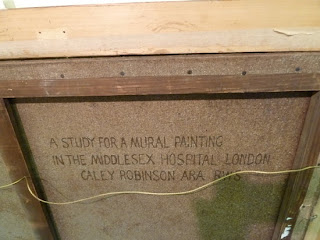 The Haynes modello might have been painted for the approval of the patrons, Edmund Davis and the Governors of the Middlesex Hospital. It is inscribed on the verso in what looks much like the artist’s hand, though, oddly, the inscription spells his name wrongly (Caley: above, from Chorley’s website). As this composition is for many people their favourite among the four pictures, there must be a fair chance of the modello reaching its lower estimate of £6,000.