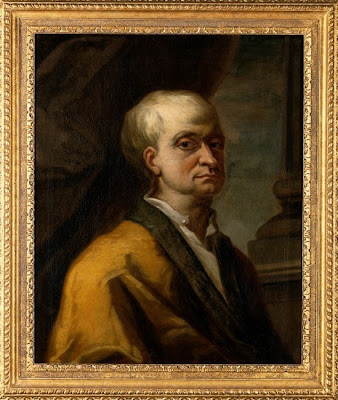 Isaac Newton by James Thornhill. Wellcome Library no. 45765i

Stoke Court, at Stoke Edith in Herefordshire, was a large and imposing house built between 1696 and 1704 by the Foley family, descendants of the ironmasters Richard Foley (1580-1657) and Thomas Foley (1617-1677). One of its finest features was the group of baroque mural paintings made for the house in 1704 by James (later Sir James) Thornhill (1675/6–1734). They were very accomplished Italianate compositions with many figures, drama, allusion and trompe l’oeil.

The creation of the mythological and allegorical paintings for Stoke Court was one of the first major projects undertaken by Thornhill after he became a freeman of the Painter-Stainers’ Company in 1703. Following further magnificent decorations at Chatsworth and Greenwich, his career would come to a climax with his paintings in the dome of St Paul’s Cathedral (1716-1720), all three ensembles still to be seen today.

However, the equally splendid Stoke Court paintings can no longer be seen: sadly, the Foleys’ mansion was consumed by fire on 15 December 1927, and Thornhill’s murals perished with it. Judging from photographs, they formed a sight as impressive as anything at Castle Howard or Chatsworth. Thornhill’s paintings on canvas were rescued, but subsequently dispersed. Now Jeremy Barker has tracked down several of them in Lancaster House, Eltham Palace, Yale University, and elsewhere, and has published his findings in a new Festschrift. [1]

Besides paintings of such subjects as The marriage of Cupid and Psyche and The triumph of arts and sciences, Thornhill’s work at Stoke included only one portrait: a painting of Sir Isaac Newton. According to family tradition recorded by Lady Emily Foley, the painting was acquired because Newton was Master of the Mint when Paul Foley (1644/5-1699), the first builder of Stoke, was Speaker of the House of Commons (having previously been a commissioner of accounts). Foley’s Speakership lasted from 1695 to 1698, and Newton took over the Mint in 1696, so this was quite possible. It could not have been painted during that brief period of overlap, as Thornhill’s apprenticeship did not end until 1696, but he could have supplied it at a later date.

Where is this painting of Newton today? There are four surviving versions of Thornhill’s portrait of Newton, three of which have documented provenances which show that they could never have been at Stoke Court. The fourth is in the Wellcome Library (illustrated above). Having seen the Wellcome Library version, Mr Barker raises the question: could this one have been the painting of Newton at Stoke Court?

At present, the documented provenance of the Wellcome Library’s version goes back only as far as the auction at which it was bought by Henry S. Wellcome (1853-1936), the founder of the Wellcome Library. This took place at Foster’s auction house at 4 Pall Mall, London, on 13 September 1933, lot 259, where it was misdescribed as “Sir Arthur Newton” (Arthur Newton was the name of a famous marathon-runner of the time). 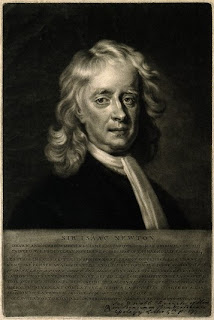 The painting was attributed to “Zeeman”: there was a Dutch marine painter (Reinier Nooms, ca. 1623-ca. 1667) who was known by the name “Zeeman” (meaning sailor), but in this context the cataloguer was more likely referring to the portrait painter Enoch Seeman (1689/90–1744), who came to London from Danzig in 1704. Seeman is sometimes referred to as Zeeman, his earliest dated painting is from 1708, and he painted a portrait of Newton. [2] Seeman’s Newton was a lively portrait, very different from Thornhill’s melancholy Newton, who has been described in the writer’s presence as looking as if he has escaped from the Addams Family. Nevertheless Seeman was not an unreasonable attribution by the standards of the time. (Above left: mezzotint of Newton by J. MacArdell after E. Seeman, 1726. Wellcome Library no. 7410i.)

At Foster’s, Wellcome bought the Newton portrait for £3. Although there is no positive evidence of its having been at Stoke Court, its appearance at auction not long after the fire is suggestive. Mr Barker concludes: “All one can say is that there is the possibility (in the author’s opinion a strong one) that Lady Emily’s picture was indeed the one now in the Wellcome Library. But we can say with absolute certainty that the Wellcome Library got a bargain!”

One Response to Sir Isaac Newton in Herefordshire