The matter of golden bedposts 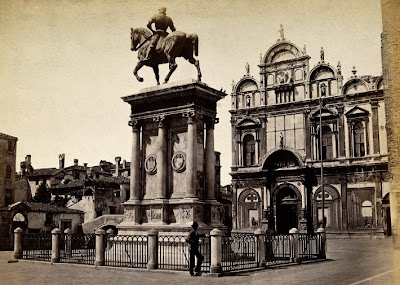 Campo Santi Giovanni e Paolo, Venice: Scuola Grande and Hospital of San Marco, with the equestrian sculpture of Bartolomeo Colleoni in the foreground. Albumen print, 189-. Wellcome Library no. 665112i.

A set of three volumes on art-collecting in Venice was published between 2007 and 2009, and the first volume, ranging from earliest times to the 16th century, is among several books on Venetian history reviewed in the June 2011 issue of The Burlington Magazine (this volume reviewed by Dr Nicholas Penny). [1]

Together the books remind us of the extraordinary value of Venetian records as documents of early modern history. The series of volumes about “art” collections also reminds us that paintings, tapestries, sculptures etc. are physical items and may therefore be accounted for in terms of Material Culture (once known as Archaeology, which, in popular usage at any rate, now means something rather different). The many surviving documents in the form of wills and house-inventories listing works of art particularly lend themselves to such treatment.

Dr Penny comments that:
“Such documents, over the last thirty years, have been more systematically investigated and analysed by social historians concerned to trace the origins of consumerism in ‘early modern’ Europe, resolutely demonstrating their clinical prowess by classing even the most spectacular or glamorous works of art as specimens of ‘material culture’.”

He has in mind accounts which tabulate statistically the paintings, tapestries, books etc. recorded in inventories, but which pay no attention to the question as to what paintings, what tapestries, and what books they were, let alone what their authors (or even owners) thought about them. Such studies are compared to the statistical results of clinical trials. They may indeed have limitations: to caricature, one household might have only one painting and another might have fifteen, but if the painting in the first house was fifteen square feet in area and the fifteen paintings in the other measured one square foot each, what’s the value of knowing merely the difference in the number of paintings? 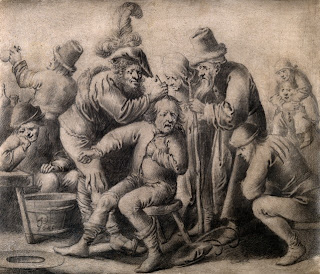 To some extent these studies are simply reactions to, and complements of, earlier generations of art-historical studies which paid no attention to the size and purpose of collections in which particular treasures (or indeed any items) played a part. Both types of study are of value, as are those which combine both approaches. The last paper of many published by the late Professor J.M. Montias, for example, on ‘Artists named in Amsterdam inventories, 1607-80’, consisting mostly of statistical tables and commentary on them, reveals that the most collected drawings in his survey were those on parchment by Pieter Quast (1606-1647), such as this example in the Wellcome Library (above right: Wellcome Library no. 21093i). [2]

Exemplary treatments of inventories are to be found frequently in The Burlington Magazine itself, and the same June 2011 issue publishes for the first time an inventory of the pitiful belongings of the renowned and mysterious painter Giorgione after his wretched death of plague in one of the lazarettos of the Venetian state in 1510. [3] A variety of approaches to material culture is found in the recent volume Everyday objects, which has chapters devoted to such subjects as shoes, playing cards, bagpipes and portraits–seemingly the very stuff studied by the older generations of archaeologists. [4] However, the introduction to that book declares a broader subject in view than the material substance of things:
“This is a book about the things people owned and the way they used them. It explores how they were made, how they were acquired, how they were used and what people thought about them. Knowing about people’s possessions is crucial to understanding their experience of daily life, the way they saw themselves in relation to their peers, and their responses to and interactions with the social, cultural, and economic structures and processes which made up the societies in which they lived.”

The editors’ awareness that a narrower approach can be taken to such objects is shown in their claim that “this is the first volume to offer multi-disciplinary analysis of a variety of material goods in pre-modern societies”. 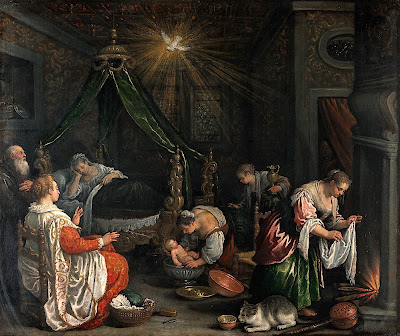 The degree to which past material objects can and should be vivified with intellectual and spiritual culture is a question which surfaces frequently for custodians and users of the Wellcome Library and the dispersed parts of the other Wellcome collections. For it is noticeable that the material collections formed by Henry S. Wellcome were not generally formed for the study of the materials as an end in themselves. The purchases of books, pictures and technical instruments were carried out for what could be deduced from those material artefacts, and then communicated to the public, about the mentalities that produced and consumed them, about the personalities recorded within them, and about their place in the history of human activities.

An example of the way in which the inventories can shed light on items in other collections (including the Wellcome Library) is given in Dr Penny’s review of the Venetian volume. He comments:
“Those of us who have wondered, when looking at Jacopo Tintoretto’s Rape of Lucretia in the Art Institute of Chicago whether grand Venetian beds really did have large carved gilded figures in place of posts, or whether the painter invented such to increase the number of tumbling figures in his dynamic composition, will sit up when we meet (on p. 355) a ‘lettiera de legname dorada con quattro figure‘ [bedstead of wood gilded with four figures] among the extraordinary possessions of Girolamo Superchi inventoried in March 1577, a few years before the probable date of Tintoretto’s painting.”

In the left foreground of Tintoretto’s picture in Chicago, one of the four sculpted figures is broken off from Lucretia’s bed and sent flying: the vandalism stresses the violence of the rapist, the out-of-control Prince Tarquin. 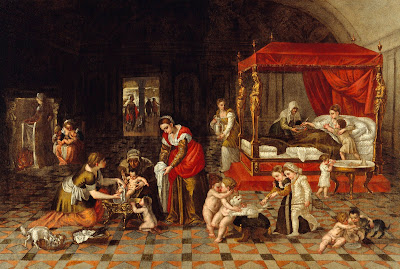 A nativity attributed to Lambert Sustris. Wellcome Library no. 44695i.

A similar bed is shown in a roughly contemporary painting in the Wellcome Library which is recorded in several versions (in the Louvre, in the Prince of Hanover’s collection, and elsewhere), and which has sometimes been associated with Lambert Sustris (ca. 1515-ca. 1568?), a painter from Amsterdam who spent his later career in Venice. Its subject is a mystery: there are no halos or other implications of sanctity, so we cannot say that the owner of the bed is Saint Anne (mother of the Virgin) or Saint Elizabeth (mother of John the Baptist). 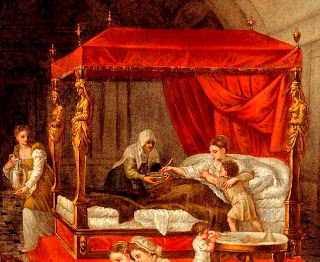 It has even been suggested that the subject is one of secular history: Caterina Cornaro (1454-1510), Queen of Cyprus, giving birth to her short-lived son Prince Jacques III Lusignan (1474-1474), though that would be unusual given the lack of examples of similar works from the time; the suggestion may have come from someone who had sat through Fromental Halévy’s grand opera on the subject, La reine de Chypre (1841).

Whoever the owner, the room is a lavish hall in a palace with marble floors, coffered ceilings, and a four-poster bed supported by carved and gilded caryatids. The scene might give us a hint of what the house of Girolamo Superchi looked like. 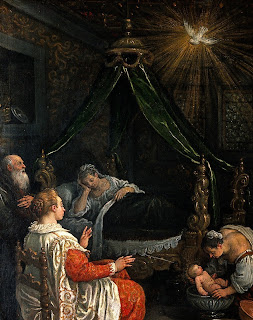 Scarcely less ornate is the magnificent carved bed shown in a painting by Leandro Bassano (1557-1622), another Venetian painter: here the descending Holy Ghost indicates the sacred subject of the scene, presumably the birth either of the Virgin or of the Baptist. The bedposts are adorned with putti playing amidst the scrollwork (detail left), though it is not clear whether they are gilded or of polished walnut.

We, like earlier people who viewed these three paintings, can enjoy the splendid furnishings vicariously even if we cannot own them ourselves. So one purpose of the Wellcome Library collections — recipe books, sacred paintings, old photographs of Venetian squares, and so on -– is to enable us to experience and recreate in our own minds something of the material culture of the past, even though their contents may no longer be available for us to visit in person. Such an experience expands our own understanding of life, and applies as much to vanished moments from our own lifetimes as to previous centuries.