This one is signed by Rowlandson and inscribed “Dr Eady and his patients” (click on image above for larger view). The bespectacled Dr Eady is having a good look at the prominently exposed breasts of the woman in front of him, while another woman in the background pours liquor from a bottle into a glass, with an expression suggesting that she has drunk enough already. So who was Dr Eady, and who were these women patients of his? 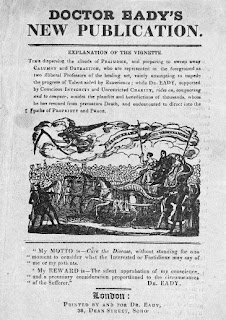 Eady is not in the Oxford dictionary of national biography, and most of what we know about him is derived from an advertising pamphlet (left) which he issued touting his treatment for “those who are unhappily afflicted with diseases of the generative system”, meaning syphilis. He is named as Samuel Phillips Eady and writes from 38 Dean Street, Soho. He agrees with the use of mercury treatment, but not indiscriminately: its effectiveness depends on how it is used. His literary style is high-flown: a quotation from the Roman poet Horace stands at the beginning of the text, there is much reference to ancient and learned authorities, and an allegorical woodcut on the front cover shows Eady dispersing the clouds of Prejudice and triumphing over Calumny and Detraction. It is a characteristic puffing pamphlet issued by a quackdoctor or commercial medicine vendor in late Georgian London.

A caricature etching from 1821 purporting to be by “Dr ED” (Eady) but probably by George Cruikshank shows a man with two prostitutes. 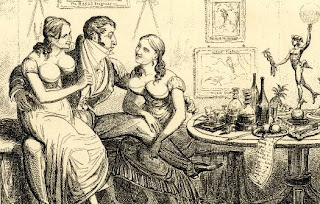 “Dr to Mrs Wood” is the name on the long bill on the right. Mrs (“Mother”) Wood was apparently a brothel-owner and supplier of the two women shown in the etching. The goods supplied by the doctor are piled up on the table: they include a good deal of liquor and a statue of Mercury, representing mercury treatment for syphilis. (Above right: detail of ‘The commercial dandy & his sleeping partners’, 1821, British Museum Catalogue of satires no. 14273; image from the British Museum online catalogue). 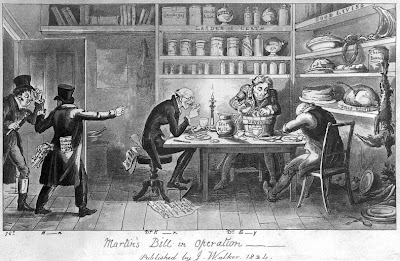 Eady is portrayed in a second caricature by George Cruikshank, an aquatint dated 1824 (above). [1] This shows, on the left seen from behind, Richard Martin, the campaigner against cruelty to animals and originator of one of the earliest laws on that subject, named after him “Martin’s Act”. He is bringing a parish constable in to a room to arrest two miscreants who are committing cruelty to animals. The miscreants, seated at table, are Dr William Kitchiner (an eccentric eye-doctor, musician and gastronome who lived in Warren Street) and our friend Dr Eady, and they are committing the crime of causing cruelty to oysters by eating them alive: this was a notorious reductio ad absurdum example used by opponents of Martin’s Bill. Eady, wearing a plaid greatcoat (image left), appears here a few years younger than the man depicted by Rowlandson, though the basic physiognomy is the same in both portraits.

There are further comments on Dr Eady in a series of articles entitled ‘Annals of quackery’, in The medical adviser which were brought together by our late colleague at the Wellcome Library, John Symons. The first (‘Eady the wall-chalker’, 1823-1824, 1: 40-42) states that he had previously been a haberdasher, and refers to him as a dealer in threads and thimbles. The second (ibid., pp. 249-250) is a general attack on his medical pretensions. The third (‘Caution to the public. Eady’s escape from St Luke’s’, 1824, 2: 77-79) avers that Eady was involved in litigation in the King’s Bench which disturbed the balance of his mind, as a result of which he was restrained in St Luke’s lunatic asylum in Old Street, London. However it is not completely clear whether this is reportage, satire, or fantasy.

Several pieces of new evidence about him were published in 2010 by the contributor to a numismatic website. [2] First, Eady issued metal tokens advertising his name and his cures: several of these metal pieces exist today. Second, a comic song about him was recorded in 1826, including these verses:

For every ill he had a pill, a powder or bolus,

And patients plenty flock’d around and never left him solus;

He gave advice for nothing,

And to prove he was not greedy,

He charged only for physic

– what a generous Doctor Eady!

He had no time for study,

Reading tries the best of eyes,

His pills he tried on patients,

That is if they were not needy,

Th’ regulars either kill or cure,

And so did Doctor Eady.

Young men would go, all in a glow,

And to him make confessions,

Sad relate how hard their fate,

With kind commiseration then he’d vow to cure them speedy,

For for promises of cure there was none like Doctor Eady.

Thirdly he was recorded in 1821 as advertising his services by chalking his name on walls all over London, to such an extent that, according to one witness, “it is scarcely possible to travel ten miles round the metropolis without meeting with his name, which naturally excites enquiry into the object and pretensions of the chalked up Hero.”

From these scraps of evidence we deduce that Dr Eady was a bon viveur who practised as a physician (probably without paper qualifications) in London during the reign of King George IV (1820-1830). It is likely that he was associated with William Kitchiner and others in popularising healthy ways of life and deprecating the over-use of potentially toxic drugs. He also acted as a syphilis expert in Soho, where his patients included prostitutes, notably those under the protection of Mother Wood. He advertised his services lavishly, provoking opposition from rivals.

The Rowlandson watercolour describes his louche character and vividly illustrates his specialisation as a Soho pox-doctor. Is one of the two women in Rowlandson’s watercolour Mrs Wood? A documented portrait of her does not seem to be available from the obvious places, but if Cruikshank knew of Eady’s association with Wood, presumably Rowlandson would have known as well. One of the articles in The medical adviser mentions that Eady was visited in St Luke’s by “Mrs Woods of Lisle Street”: Lisle street is a street in Soho that is very close to Dean Street, and this Mrs Woods is presumably the same as Mrs Wood the brothel-keeper.

It must have been in London that Rowlandson painted the watercolour in the 1820s, and it was in London also that the Wellcome Library acquired it in 2010, but between those two dates the watercolour had travelled nearly half way round the Earth. It has on the reverse two inscriptions recording its previous owner. One gives his name and address: Stephen Longstreet, of 610 N. Elm Drive, Beverly Hills, Calif. The other gives his name and the date on which he acquired it: 24 April 1954 (above). 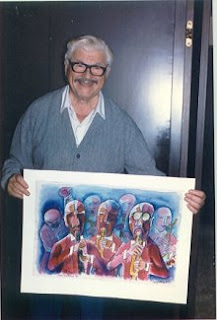 Stephen Longstreet (1907-2002: image left) was a versatile American who was himself a watercolour artist. His original name was Chauncey Weiner [or Wiener]-Langstrasse. He worked as a cartoonist and illustrator under the name Henri, and, with the encouragement of William Faulkner, became a writer as well. In 1940 his publisher, Bennet Cerf of Random House, suggested he use the pen-name Longstreet: as Stephen Longstreet he was the writer of numerous novels, television programmes, movies, books on jazz, and ghosted autobiographies such as that of Hoagy Carmichael. 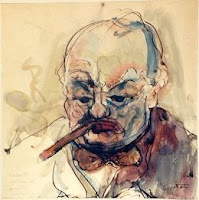 Longstreet was also a prolific watercolour artist on various themes, including jazz, show business, political cartoons, Hollywood artistes such as Greta Garbo, and a British portrait-subject: Winston Churchill (right). Longstreet’s ownership of Thomas Rowlandson’s watercolour of Dr Eady, hanging for many years in his Beverly Hills residence, united one watercolourist with another across a continent, an ocean, and more than a century.

Images of Stephen Longstreet and his works are reproduced by kind permission of Larry and Lisa Hupman.

One Response to Dr Eady–from Soho to Beverly Hills