Object of the Month, August 2011: Human Skeleton and young Rhinoceros 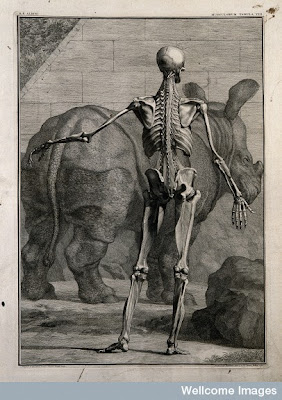 Of the many joys that accompany a stroll around the Wellcome Library’s stores, an unexpected encounter with a rhinoceros must rank as one of the more novel. The beast in question is Clara, an Indian Rhino who became in international superstar after arriving at the port of Rotterdam in 1741, at the tender age of two years old. Clara had been raised in the Bengal home of the director of the East India Company, who adopted her after her mother was killed by hunters. Evidently Clara was quite fond of human company as in Bengal she was allowed to meet visitors and even eat from the meal table ‘like a lap dog’. But on arrival in Rotterdam, to say that Clara was a novelty was an understatement. Her new owner, the ship’s captain Douwe Mout van der Meer put Clara on public exhibition almost immediately and found the enterprise so profitable that he was soon able to give up his job and travel Europe with her full-time.

Over the course of the next seventeen years Clara was seen by many thousands of paying tourists, across the low countries, France, Germany, Austria, Italy and England. Rhinoceros fever hit Europe; medals were cast in her honour, poems addressed to her and during an especially triumphant stay in Paris in 1750 a hairstyle á la rhinoceros was named after her. Even Casanova wasn’t immune to Clara’s charms – although in his memoirs he reports that his mistress mistook the burly chap taking her entrance fee for the exhibit itself. 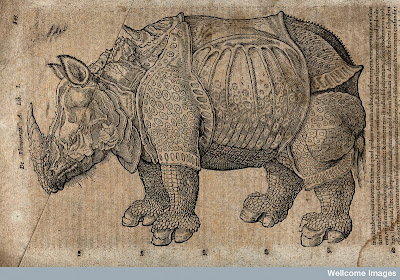 But Clara’s really lasting significance lay in zoological illustration. Until her arrival, artists and illustrators looking for an image of a rhinoceros were still slavishly copying Dürer’s famous woodcut of 1515, the manifest inaccuracy of which hadn’t detracted from the grip it held on the popular imagination. For artists and illustrators, therefore, Clara’s arrival was an opportunity not to be missed. One of the first to depict Clara was the artist and engraver Jan Wandelaar (1690-1759) who was at that time completing a commission to illustrate Bernard Siegfried Albinus’s magnificent Tabulae Sceleti et musculorum corporis humani, an anatomical atlas that promised to be the most accurate ever made. To enhance his figures, Wandelaar chose grandiose and whimsical naturalistic backgrounds which deepened the perspective and gave his figures a greater sense of volume. For his two plates illustrating the bones and the fourth order of muscles, he included Clara grazing in the background, her bulk and armour giving a pronounced contrast to the human form in front. The novelty of Clara’s appearance can’t have harmed Albinus’ enterprise either, as the London edition of the prints makes clear: “we thought the rarity of the beast would render these figures…more agreeable than any other ornament resulting in mere fancy.” Whatever the reason for her inclusion, these two prints are certainly amongst the earliest illustrations by a western artist to represent a rhinoceros with any degree of accuracy. 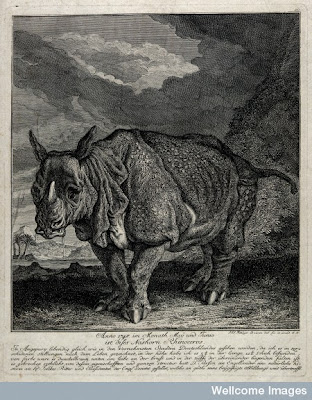 It wasn’t long before Clara was the darling of the art scene, having her portrait painted by some of the finest animal painters of the age. In 1748 the engraver Johann Elias Ridinger, (1658-1767), already famous for his sets of animal prints, made a series of six drawings of Clara in various poses, which he engraved as prints and used in the background of his other works. Clara appears to have aged considerably in the six years between the two engravings and makes quite a pathetic figure (although, interestingly, in the preliminary sketches she appears relaxed and rather less ‘droopy’). Early the next year the artist Jean-Baptiste Oudry (1686-1755) painted a life-size portrait of Clara at the fair of St Germain on a canvas 15 feet long and ten feet high, which was exhibited at the Paris Salon. And in 1751, while in Venice, Clara was the subject of two famous paintings by Pietro Longhi (1701?-1785), one of which is held in the National Gallery.

Clara died in London on 14th April 1758. In spite of her peripatetic existence, Clara’s life in Europe had been longer and considerably less brutal than her few forebears – Dürer’s rhinoceros, bound in a velvet collar and gilt chains, drowned in a shipwreck off the coast of Italy. Her successor, the so-called ‘Madrid’ rhinoceros of 1579, fared little better – after she overturned a chariot full of nobles the King of Spain ordered the removal of her eyes and her horn. Clara had led quite an extraordinary travelling life and enjoyed a diet that included “a good quantity of wine and spirituous liquors” as well as beer, oranges, and tobacco smoke blown up her nose. What’s more, it was her image which finally supplanted Dürer’s rhinoceros in the popular imagination and ensured that her likeness can be found in numerous natural histories from the eighteenth century to today.

The rhino is a homely beast,

For human eyes he’s not a feast.

I’ll stare at something less prepoceros.

Images : 1. An écorché figure, front view, with left arm extended, showing the bones and the fourth order of muscles, with a grazing rhinoceros in the background. Line engraving by J. Wandelaar, 1742 (Wellcome Library no. 565796i)

2. An écorché figure, back view, with left arm extended, showing the bones and the fourth order of muscles, with a rhinoceros seen in the background. Line engraving by J. Wandelaar, 1742 (Wellcome Library no. 565802i)