The papers of influential British psychologist Charles Edward Spearman (1863-1945) were deposited in the Wellcome Library by the British Psychological Society in 2008. They are once more available to the public, now accompanied by a new expanded catalogue (PSY/SPE).

Charles Spearman is known for his seminal work on the testing and measuring of human intelligence. In 1904 he posited, in the prestigious American Journal of Psychology, his famous two-factor theory of intelligence. Its components were soon abbreviated to g to represent general intelligence and s for specific ability. It can be said that Spearman spent much of his academic career developing, explicating and defending his theory of the g factor (general factor) as well as devising the necessary mathematical tools for reliably interpreting test data, pioneering the use of Factor Analysis and developing what is now known as Spearman’s Rank Correlation measure (or Spearman’s Rank Correlation Coefficient).

Following a prolonged stint in the British Army, Spearman, much influenced by German psychology of the late 19th century, headed to Germany in 1897 to work in Wilhelm Wundt’s psychology laboratory in Leipzig. On permanent return to England in 1907 he headed up a psychological laboratory at University College London and went on to help create the ‘London School’ of psychology which was characterized by its emphasis on statistical and psychometric methodologies for studying human ability.

Spearman’s The Abilities of Man: Their Nature and Measurement (London: Macmillan, 1927) represented an accumulation of his experimental and philosophical evidence in support of his theory of human intelligence. 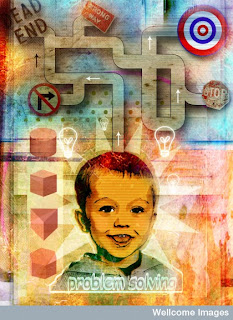 (For a detailed exposition of Spearman’s work and achievements in experimental psychology and psychometrics, as very much a layman on this topic, I strongly advise the reader to scrutinize Spearman’s own works and the numerous published biographical sources).

The Spearman papers provide a fascinating insight into Spearman’s work from the turn of the twentieth century through to the early 1940s.

Material relating to actual intelligence test data and test design in the 1930s in the UK and USA is present throughout the collection. Of notable interest will be the material in section PSY/SPE/3 containing material relating to the so-called ‘Chicago experiments’ on school children conducted by Karl J. Holzinger and Frances Swineford in the 1930s to which Spearman contributed. Their studies resulted in the Preliminary Report of Spearman-Holzinger Unitary Traits (Chicago University, 1934) and, after further studies conducted in Chicago, A Study in Factor Analysis by Holzinger and Swineford (Chicago University, 1939).

Important to students of the history of psychometrics, the material also amply illustrates varied socio-economic and cultural constructs during this period on the origins, nature and cause of intelligence and contemporary motivations behind the development of aptitude testing, cognitive ability rating and problem solving exercises which became popular as access to education broadened in the late 19th and early 20th century.

Spearman’s papers also contain much fascinating material on sensation analysis and spatial, visual and auditory perception. These are mainly in the form of his notes and lecture notes (PSY/SPE/1/3).

A Note on Provenance:

The Spearman collection was originally held by the Charles Myers Library, London, and given to the British Psychological Society in 1974.

The Charles Myers Library had its origins in the National Institute for Industrial Psychology (NIIP), co-founded by Myers and Henry J. Welch in 1921. By 1930 the NIIP employed about 50 people and a librarian had been appointed to look after its reference collections. Spearman contributed his papers to the library, who received it on his death in 1945. After Myers himself died a year later the Council of the NIIP renamed the library the Charles Myers Library in his honour. In the 1960s the NIIP faced a number of problems and its financial situation had gravely worsened by the 1970s. It was at this point that collections were dispersed to other libraries and institutions. In 1977 it was wound up permanently.

– Charles Spearman, from Portraits of Statisticians

– Learning to solve problems: Illustration depicting a child’s development of problem solving skills through the use of games and puzzles (Bill McConkey, Wellcome Images, 2004)