The Wellcome Library features a wealth of material on improving health but it also contains information on those whom, some believe, may also do us harm. Many works focus on the subject of witchcraft, including a whole gallery devoted to the dark arts in Wellcome Images. 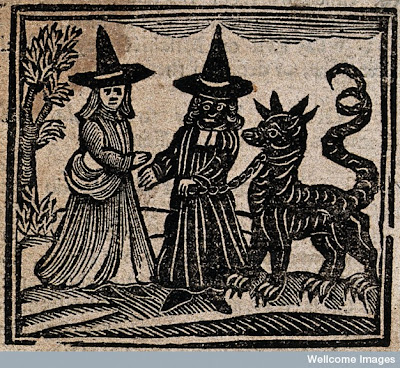 Wise women or the like were often part of a tradition of folk medicine that helped the poor with cures and remedies for illness but when things did not go well, accusations of witchcraft could often arise.

Currently available on the BBC iplayer (in the UK only, until 28 August 2011) is an intriguing tale of witch-hunting in 17th century Lancashire, featuring pictures of frogs and human dissection from Wellcome Images. The background story is also featured on the BBC news web site.

So why is our frog in the programme? It is from a manuscript of the mid-17th century and helps to illustrate how dissection was used as a tool to separate the supernatural from the natural. The frog was thought to be a witch’s familiar. In the case mentioned in the programme, independent observation came to the aid of a woman accused of witchcraft. 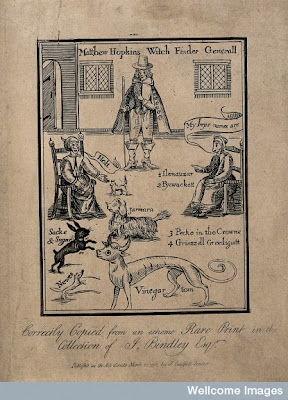 A familiar is usually a spirit or demon controlled by a witch to do his or her bidding in the guise of an animal, for example, a frog or black cat. The programme describes how, by dissection, it was demonstrated that this particular frog was just an ordinary amphibian with no distinctive unnatural anatomy. This image of the frog, shown in the programme, is taken from a 17th Century manuscript featuring various images connected with alchemy.

A Wellcome image of dissection, printed in 1679, can also be found in the broadcast. Witch trials were often dependent on rumour, superstition and the statements of witnesses. In contrast, dissection was a method of finding physical evidence which, it could be argued, was altogether more objective.

Images: Witchcraft: a white-faced witch meeting a black-faced witch with a great beast. Woodcut, 1720 Wellcome Library no. 44115i

Matthew Hopkins, Witchfinder general, with two supposed witches calling out the names of their demons, some of which are represented by animals. Etching, 1792, after an earlier woodcut Wellcome Library no. 38560i