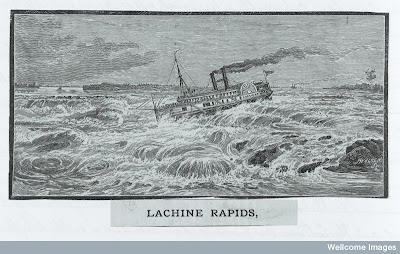 Regular visitors to this Blog will know, the Wellcome Library holds the personal papers of many doctors, surgeons, medical scientists and practitioners throughout the ages. These collections, especially from the 19th century onwards, frequently include entertaining journals, notebooks, letters and ephemera generated during the course of travels, trips and holidays undertaken by these medics.

To mark World Tourism Day, we’ll focus on a particularly appealing set of holiday journals: those of London-based Scottish doctor Charles Brodie Sewell (1817-1900). They comprise 18 volumes, mainly covering his trips around all parts of Britain and the resorts of Europe between 1868 and 1892 and are illustrated with much inset material such as brochures, advertisements, tickets, menus, photographs and folding maps (MSS.4498-4515). Evidently once Sewell had built up a popular and successful practice he was able to reward himself with substantial holidays when could he de-stress and make use of his many contacts abroad. 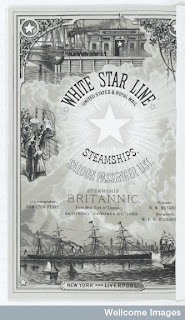 There are, however, some notable diversions from the traditional British and Continental destinations. In 1883, when he was around 65 years old Sewell and his companion (it is likely that this was his wife, but it is possible that it may have been his daughter) made a long-intended trip to the North Eastern seaboard of the United States of America and into Canada (MS.4508). During this period, September-October, he had the chance to meet American friends and colleagues, some of whom he’d only ever been able to correspond with over the years. There were also many opportunities to experience new scenery and different races and cultures as the pair traveled through the state of New York, up the Hudson River, to Lake George, Saratoga Springs, Toronto, Montreal, Lake Ontario, the Lachine Rapids, Quebec, Boston, Newport, Philadelphia, Baltimore and Washington DC.

The holiday began with the Atlantic sea crossing. This is particularly anticipated and relished by Sewell who writes an entertaining account of the two weeks from Liverpool to New York on the White Star liner Britannic. As one would expect, this takes in stormy weather, severe bouts of sea-sickness, gossip regarding fellow passengers, sporting activities on deck (tug of war, long jump and hop scotch) and complaints about the racket coming from the saloon at night. 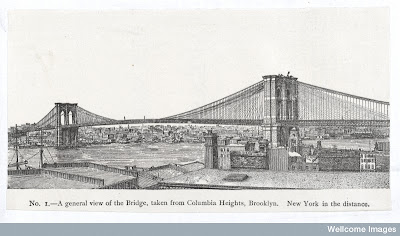 Once the “strict and venal” searches by New York harbour customs officials were completed Sewell and his companion were free to explore the sights. The recently completed Brooklyn Bridge in New York City especially impresses Sewell who takes a ferry along the East River and passes underneath it. At this point in time it is the longest suspension bridge in the world. Anchored by two neo-Gothic towers and a complex framework of steel-wire cables it was guaranteed to amaze. 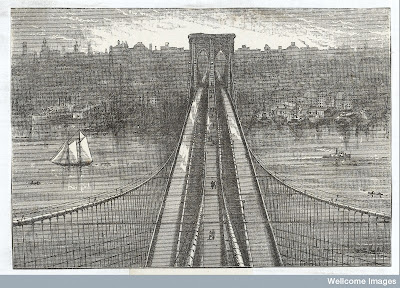 As well as striking man-made structures, magnificent natural phenomena such as Niagara Falls take up many pages in the journal. Sewell’s hotel room provides a view of the American and Canadian side of the falls, which he describes as “dazzling” and “an intoxicating sight, grand and beautiful beyond description”. A truly memorable day out, it is also characterized by the – even in the 19th century – familiar tourist sights of people offering guide services, photographs and cheap souvenirs. Viewing the Falls from a sheltered position, Sewell gleefully describes seeing two men in standard issue yellow oil skins get soaked through and looking miserable, several drenched people and “a fool” using an umbrella.

The journal contains descriptions of a great many buildings, places, sites and scenes which would not vary much from the itinerary of today’s visitors to the eastern United States and Canada. Also in not too dissimilar tourist fashion, Sewell expresses annoyance at various officials, amazement at the large portions of food in America, and gives his opinions on the standard of accommodation (overall, Canadian facilities are presented as being somewhat less comfortable than those in the United States), troublesome fellow passengers, rude hotel staff, touts, hawkers and prices. If he was alive today, one can imagine him posting comments on travel advisory websites, giving his ratings on various hotels, services, tourist sights and transportation.

What makes this (and all the other journals in this collection) all the more enjoyable are the humorous anecdotes which vividly convey Sewell’s character and opinions. At one point he describes a train journey during which he encounters an incessantly garrulous passenger who he tries to avoid by pretending to be asleep… alas to no avail!

On a more serious note – and with particular relevance to the ethos of World Tourism Day – this journal also insights into contemporary relations between the African-American and white communities in the USA and Sewell’s impressions of the status of Native Americans in Canada.

Sewell’s enthusiasm for travel continued for nearly another ten years as he undertook further trips to Europe (including visiting Switzerland, Germany and parts of the Austro-Hungarian Empire) and England. There is a notable detour to Norway in 1888, an account lavishly illustrated with pictures of dramatic fjords and mountain landscapes (MS.4512).

Images:
– Drawing of a steam boat on the Lachine Rapids, Canada
– The saloon passenger list of the White Star Line steamship ‘Britannic’ for its journey from New York to Liverpool, 27th October 1883
– A general view of the Brooklyn bridge taken from Columbia Heights, Brooklyn. New York can be seen in the distance
– The view from the top of Brooklyn Tower, looking down upon the bridge and towards New York
(All images, from MS.4508).