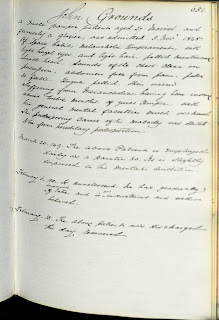 One of the fastest-growing categories of Wellcome Library users in the past ten years has been family historians. Many people, of course, have medical practitioners among their ancestors: doctors, nurses, physiotherapists, opticians, vets… But the Library’s holdings for family historians go further than this: they also provide sources for those of us (which realistically, in the United Kingdom, will be everyone) whose ancestors have passed through the medical system as patients.

In recent years the family history community has become aware that the Wellcome Library’s holdings are not confined to high-level abstract thought on medical history, but contain a huge amount of nitty-gritty information on named individuals. (The Library’s sources for family historians are summarised in a downloadable sources guide here, and described in a talk on “Hunt the Ancestor” which is repeated regularly). The difficulty, of course, is to identify the relevant records from the library’s catalogues. Census records, for example, may identify that an ancestor was a patient in a particular institution, but it may then be a matter of working through the records of that institution in search of a particular name.

To assist in this process, the Library’s archive department has recently enhanced the catalogue records relating to its casebooks from Camberwell House Asylum. Among family historians working with London records, this institution is something of a cause célèbre: it was set up in the mid-nineteenth century and accepted patients – many of them “paupers” referred by the relevant Poor Law authorities – for over one hundred years, but only three of its casebooks are known to survive. One is held at the Royal College of Psychiatrists and the other two at the Wellcome Library, as MSS.6220-6221. Those held here describe patients admitted between 1847 and 1853, but continue to document those patients throughout their time in the asylum, some still being there as late as 1887. As a result, for a family historian who knows that an ancestor was in that asylum in, for example, 1870, there is a chance that the ancestor may be documented in our casebooks; but it is a slim chance, and there is a strong likelihood that he or she might make a journey to London, or hire a research assistant, only to find no mention of the name needed (constraints on staff time, unfortunately, mean that the archivists here have not been able to carry out searches for researchers). 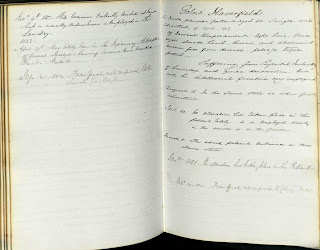 The enhancements to the catalogue mean that this no longer applies. Over a period of some weeks, in little pieces of time here and there, one of our Library Services Assistants has compiled an index of patients’ names in our two Camberwell House volumes, and these have been added to the catalogue records to make them available through the normal search interface. The results can be seen here and here. A researcher looking for any of the unfortunate patients listed there – for Mary Ann Binstead, Alfred Hobday, Christopher West… – can now simply enter the name in the “Any Text” box on the archive catalogue search page (making sure to click the And option in the “Word Options” below, as this finds the names in whatever order they are given – both “Christopher West” and “West, Christopher”) and find out immediately whether their ancestor is one of the lucky few whose details survive.

Many of the patients, as noted above, were extremely poor; many were admitted with severe depression or other causes of unhappiness. At this distance in time we can do nothing to help them; but this work on the catalogue makes it a little likelier that at the very least they can be remembered.