Tissue Culture in History, Public and at the Wellcome Archives 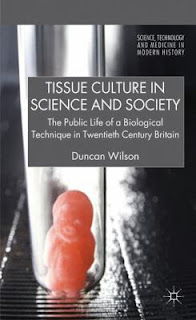 Duncan Wilson is a Wellcome Trust Research Associate at the University of Manchester’s Centre for the History of Science, Technology and Medicine (CHSTM). Here, he describes the background and research to his new book, Tissue Culture in Science and Society: The Public Life of a Biological Technique in Twentieth Century Britain

Recent decades have seen growing controversy over the biomedical use of human tissue and cells. Many bioethicists, anthropologists and sociologists claim that unrest over work on stem cells, biobanks and the retention of organs in British hospitals reflects a longstanding divide between scientific and social views of the body. In this model, scientists and doctors view tissue and cells as an experimental resource and have long pursued their work in secret. And public resistance is said to result from the way these practices contravene public demands for bodily integrity, disclosure and self-control – whether it in recent cases or historical examples, such as eighteenth and nineteenth century scandals over grave-robbing.

One technique that often features in these accounts is tissue culture, which involves the maintenance of humans and animal material in the laboratory – or ‘in vitro’. Tissue culture was first employed in 1907, and although it was initially difficult and contested, technical improvements in the 1940s and 1950s transformed it into a standard technique that underpinned important research on vaccine development, cancer research and in vitro fertilization (among many other examples). During a Masters degree at the University of Manchester’s Centre for the History of Science, Technology and Medicine (CHSTM), I noticed that tissue culture featured in newspaper reports, fictional stories and cinema films during the twentieth century. With Wellcome PhD funding I began to investigate this popular coverage, in order to detail what it might tell us about popular attitudes to research on tissues and, hopefully, inform current debates.

My first port of call was Archives and Manuscripts at the Wellcome Library, which holds several files related to the Strangeways Research Laboratory in Cambridge (SA/SRL), which was acknowledged as the British ‘home of tissue culture’ during the 1920s and 1930s. These files include the papers of Thomas Strangeways, the laboratory’s first director and founder, his successor Honor Fell (PP/HBF) and the radiologist Frederick Gordon Spear (PP/FGS). They contain private correspondence, financial records, lecture transcripts, laboratory notebooks and, crucially for my research, many newspaper reports on tissue culture.

A 1938 report in the British paper Tit-Bits, which claims tissue culture will soon be used to produce ‘chemical babies’.

After looking over these materials, I realised they undermined claims that popular attitudes to work on tissues are universally negative, unchanged over time, and at odds to scientific attitudes. Firstly, it was clear that newspaper articles on tissue culture changed significantly during the twentieth century. The tone and content of reports from the 1920s and 1930s, for instance, differed considerably from reports in the 1940s and 1950s. It was also clear that these changes reflected specific historical concerns. Reports from the 1920s and 1930s highlight the interwar fascination with eugenics, sex reform and the potential dangers of science. They predict the in vitro growth of ‘chemical babies’ and claim that cultured tissues could ‘engulf the earth and all its waters’ after escaping the laboratory. 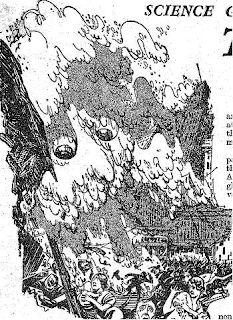 Attitudes to biomedical research became more positive during the 1940s and 1950s, following work on antibiotics and the polio vaccine, and reports on tissue culture now claimed Strangeways scientists were working toward a cure for cancer and other diseases. In 1950, the Daily Mail and the Daily Mirror even claimed they had discovered a cure for baldness! These positive reports were clear that scientists regularly cultured human tissues, to quote The Times, ‘outside of the body of which they were once part’, but sounded no unease at this practice. Indeed, the acquisition and use of human tissues was not criticised in Britain until the 1990s – reflecting growing demands for patient autonomy and informed consent, as well as opposition to the fact that patients and their families were denied a share of the financial profits that could now be made from work on tissues.

Perhaps most importantly, the materials contained in the Wellcome archives also highlight considerable interaction between scientific and popular concerns. Far from operating against public attitudes, scientists at the Strangeways laboratory drew upon and influenced them. For example, during a 1926 lecture on tissue culture, Thomas Strangeways engaged with changing concepts of time, the body and lifespan by arguing that tissue culture enabled cells and tissues to outlive the body. To demonstrate this he produced a tissue culture made from sausage meat, in which he claimed cells continued to grow and divide. To newspapers, this ‘immortal sausage’ demonstrated both the changing nature of mortality and the power of biology, with Strangeways using tissue culture to show the ‘indeterminate character of death’. Newspaper reports that predicted endlessly growing tissue cultures were not cases of tabloid sensationalism, then, but drew on scientific claims that tissue culture made tissues and cells immortal. This was also the case with reports on ‘Chemical Babies’, which drew upon scientific arguments that, to quote Strangeways, ‘the test tube baby is not inherently impossible’. 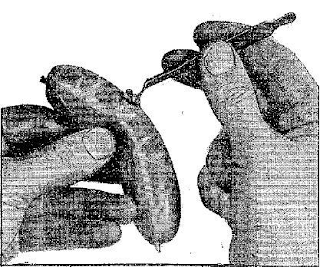 Illustration to a 1928 report in a US newspaper, with Thomas Strangeways demonstrating how ‘even a sausage contains living cells’.

The Wellcome archives also show that Strangeways scientists wrote for popular audiences, lectured on the radio and even made cinematic films of tissue culture. This material demonstrates that the history of tissue culture, contrary to what many claim, is marked by an ongoing engagement between scientists and popular audiences. This continues to be the case today. Even before the scandals surrounding retained hospital organs, some scientists claimed that patients should be informed about the fate of excised tissues and even allowed to share in any financial profits.

Highlighting this historical interplay is crucial to maintaining public trust at a time when tissues and cells are central to biomedical research. Confidence in this research is only likely to falter if we believe that scientists and the public have long been at loggerheads over research on tissue.