How much medical history do you pass every day?

By Natalie Pollecutt | From the Collections

Every day I walk to my local station to catch the train to work. Every day I pass a plaque on the station wall commemorating an event which has historical significance. And every day I ignore it.

On 8 October 1952, 112 people lost their lives and 340 people were injured in the worst peacetime rail accident in Great Britain. Three trains were involved in the collision, which accounts for the very high loss of life (1) (2). 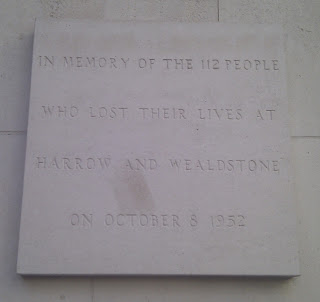 So why should this terrible accident be of interest to the medical historian? Because this was the first time the triage system for assessing casualties was used in the UK:

By modern standards the fire and ambulance services were hopelessly inadequately equipped, and were untrained to keep trapped people alive. All that could be done was a little bandaging and to take people to hospital as fast as possible. Edgware General Hospital learned of the crash when a commandeered furniture van arrived with walking wounded. Among those responding to the disaster were US teams from nearby bases, who were trained in  battlefield medicine. They were disciplined, brought plasma and undertook triage – sorting casualties into those needing urgent attention, those who could wait and those who were beyond help. It was a new experience for the rescue services;  they were amazed and full of admiration. (3)

Contemporary issues of the British Medical Journal, and the Lancet, available in the Wellcome Library, talk about the efficient use of the triage system (4) (5), discuss how to deal with such a large-scale disaster (6), and touchingly allow thanks to be given to all who helped in the aftermath (7).

When I do stop and think about this event it is quite sobering. This is partly due to the large loss of life and number of casualties, but also because it happened just at the time of day when I’m getting on my commuter train to Euston. And what other history am I missing as I go about my usual routine?

It also makes me wonder if there’s something harrowing about Harrow. Harrow-on-the-Hill is the site of the first fatal motoring accident in Great Britain (8). But that’s another medical history story…

Natalie Pollecutt is Library Systems Officer at the Wellcome Library.