Item of the Month, October 2011: extract from Servetus’ Restoration of Christianity 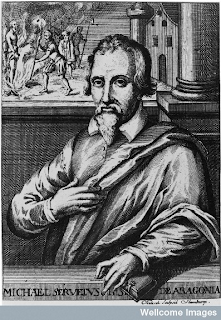 This week marks the anniversary of the death of Michael Servetus (1511-1553): theologian, physician, heretic, and author of one of the rarest books in history.

Servetus was one of the most accomplished and controversial scholars of the sixteenth century. Born in Villanueva de Sijena, Spain, he studied law and – later -anatomy and medicine in Paris, where he was a near contemporary of Vesalius. In his own age Servetus was a renowned geographer and astronomer as well as a physician, but his fame among anatomists rests on his claim as the first westerner to describe the pulmonary circulation.

During his studies, Servetus had perceived that blood circulated from the right side of the heart to the left through the lungs, where it was mixed with ‘inspired air’ – a view contrary to the currently held opinion that blood passed through the partition that divides the two ventricles within the heart. Servetus published a description of his discovery in 1553, prefiguring William Harvey’s more complete and detailed explanation by 75 years. Had it been widely publicised, this account could have been one of the most significant breakthroughs in the history of anatomy. But Servetus published his findings not in a medical textbook, but in a religious tract. Not only that, but the medical breakthrough was overshadowed by theological content that was – quite literally – incendiary.

Servetus was a radical and uncompromising anti-trinitarian and this work, Christianismi Restitutio (‘The Restoration of Christianity’), described a religious philosophy that was unacceptable to both catholic and protestant church authorities. Although the work was anonymous, Servetus was denounced to the catholic inquisition in French Vienne – possibly by Calvin, with whom he was corresponding. Servetus was arrested, interrogated and imprisoned awaiting trial for heresy. After three days he managed to escape from jail and flee – just in time, for the court condemned the absent Servetus to death by a slow fire. Meanwhile, Servetus was making his way to protestant Geneva en-route to Italy, where he hoped to find safety. There, whilst attending mass, he was recognised and put on trial once more. This time there was no escape. On the 27th October 1553, with the last copy of the book chained to his body, Michael Servetus was burnt at the stake, reportedly calling out his heretical views to his final breath.

For over 150 years every copy of the Christianismi Restitutio was believed to have been destroyed. Then, in 1706, the German philosopher Gottfried Wilhelm Leibniz, browsing through the shelves of a friend’s library, recognised a copy of the lost work. This was none other than the same copy used by Germain Collardon, the prosecutor at Servitus’ trial, and containing manuscript notes by him. Leibniz realised at once that his friend, Karl von Hessen-Kassel, had in his possession one of the rarest books in history. There isn’t enough space here to do justice to the history of this copy since its discovery. Through theft, forgery, sale and barter it has passed through some of the most significant collections in the world, and now resides in the French Biblithèque Nationale.

In 1723 an illicit reprint was attempted in London. The exemplar was smuggled to England by a Dutchman, Gysbert Dummer, who delivered it to London printers Samuel Palmer and Issac Dalton. 252 pages had been completed when a schoolmaster named Patrick, who had been employed to correct the proofs, reported the scheme to the Bishop of London. On the 27th May the sheets were confiscated by the authorities and once again – 170 years after Servetus’ death – an attempt was made to eradicate his controversial work.

Servetus’ 1553 printing of Christianismi Restitutio is now known to have survived in two complete copies and one fragment. The 1723 reprint fared a little better – just four copies of the text and one of the proofs are known. Our object of the month, then, is a copy of the 1723 printing of Servitus’ Christianismi Restitutio, known as De Trinitate Divina. A banned copy of a banned work whose author was twice sentenced to death, and which now sits innocuously in the basement of the Wellcome Library.

Image: From William Stirling, Some Apostles of Physiology. London : Priv. print. by Waterlow and sons limited, 1902
Further reading: Lawrence and Nancy Goldstone, Out of the Flames. London: Century, 2003.