Amidst the much-publicised closing-down and boarding-up of some of the public libraries in the London Borough of Brent, there has been a cheering event from Brent Archives and Museum at Willesden Green Library Centre: their exhibition of works by the painter of cats, and sometime psychiatric patient, Louis Wain (1860-1939), who resided on Brondesbury Road in Kilburn (now in the borough of Brent) before his confinement in a series of asylums. The exhibition Communicating through cats: the art and mind of Louis Wain ends on Saturday 29 October 2011 (open Mon.-Sat. 10-4). It contains a good cross-section of Wain’s anthropomorphic pictures of cats –- bicycling, cricketing, tea-drinking and so on. 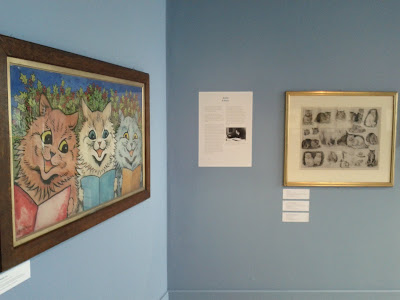 Among the rare and remarkable works on display are two large mirrors painted by Wain for his fellow-patients at Bethlem Hospital at Christmas times (one shown above left), lent by the Bethlem Art and History Collections Trust. 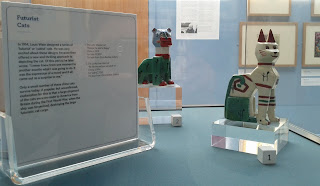 No less surprising are examples of ceramic cats designed by Wain as Cubist pastiches. Their rarity may be explained by the unconfirmed story that the stock of them was sunk by a German torpedo on a cross-Atlantic crossing. Marine archaeologists of the future who are not familiar with Wain will have great difficulty in identifying these works, with their unusual combination of Cubist, Egyptian and Art Deco associations. These two examples are on loan from Chris Beetles Gallery.

Wain also knowingly applied historical and fanciful styles to his paintings, a fact which led a psychiatrist writing in a national newspaper to misinterpret them as evidence of psychosis: the story is well set out in the exhibition. That interpretation is however still accepted by some. [1]

Two drawings from the archives of a psychiatrist, Noel Gordon Harris (1897-1963), are lent by the Wellcome Library. 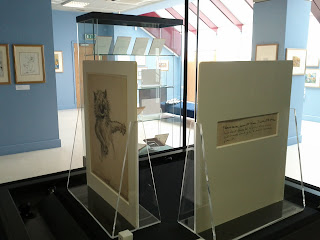 They are impressively displayed in a showcase to reveal a typically mysterious inscription on the verso of one of them, spoken by a smiling cat: “I have more mouth than I want to open, but don’t look, it is very dark inside. But I will send you a pretty message from it.” That sums up the title of the exhibition, as interpreted in Wain’s idiosyncratic manner. Communicating through cats is simultaneously humorous and sinister. An approachable and rewarding exhibition.