The Statue of Liberty’s sister and S M Burroughs

As well as our own small anniversary, today is also the 125th anniversary of one of the world’s most famous cultural artefacts, as it was on this day in 1876 that the Statue of Liberty was dedicated.

Furthermore, there’s a connection between the statue and the early days of our founder Henry Wellcome’s pharmaceutical business – but it relates not to Henry Wellcome and nor to the statue in New York… 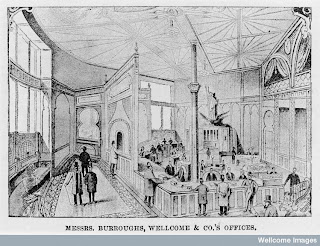 Just visible in the top right of this image is a copy of the Statue of Liberty. As indicated, the image is of Burroughs Wellcome & Co’s then head office at Snow Hill in London. It references not only the nationality of the company’s founders, but also hints at the activities of Wellcome’s business partner, Silas Mainville Burroughs.

The statue that stands in New York was – as every good American schoolchild knows – a gift from the people of France in 1886. What’s a lesser-known fact is that a smaller replica of the statue stands in Paris on the Île aux Cygnes – facing west in the general direction of her sibling. 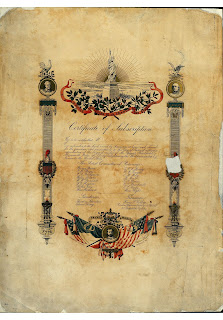 The erection of the smaller statue in Paris was paid for by subscription by Americans resident in Europe to commemorate the centenary of the French Revolution and inagurated on 4th July 1889. Silas Mainville Burroughs was a subscriber to the fund. And here’s the evidence – preserved in the Wellcome Library’s collections – Burroughs’s certificate of subscription (WF/E/02/03/05).

Whilst the certificate does not record how much money Burroughs donated, it does add another detail to the life of Wellcome’s business partner: a politically motivated individual, who still stands very much in the shadow of Henry Wellcome.