A Merman comes ashore in Bromley 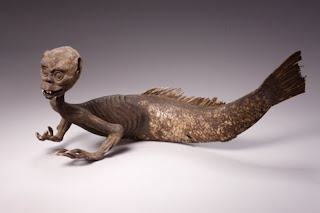 This Saturday (5th November), Wellcome Library Research Officer Ross MacFarlane will join Paolo Viscardi, one of the Horniman Museum’s Natural History Curators, at the Bromley Musuem, Orpington, Kent, on “a voyage of discovery across oceans, through time and into the realm of the merman”.

The free event, which begins at 11.30am, ties in with the temporary loan of the merman to the Bromley Museum from the Horniman. Before entering the Horniman’s collections, the Merman was previously owned by the Wellcome, being purchased for Henry Wellcome in 1912.

For those wishing to join Paolo and Ross on their journey into the cultures and contexts of mermen and mermaids, more details on the event are available from the website of the Horniman Museum.