Everyone who visits Agra in Uttar Pradesh visits the Taj Mahal, the monument which was built from 1632 onwards by the sorrowful Shah Jahan (1592-1666), fifth Mughal emperor, in memory of his wife, Mumtaz Mahal, after her death in childbirth. 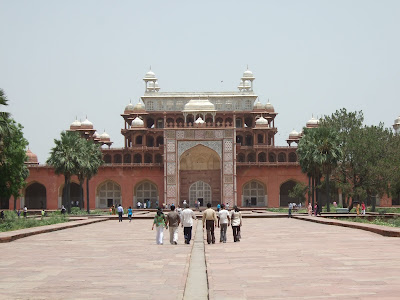 Not everyone visits nearby Sikandra. Here, those who do will find the magnificent earlier mausoleum of Akbar (1542-1605), the mighty third Mughal emperor, conqueror of northern India, patron of arts and sciences, and grandfather of Shah Jahan. [1] The mausoleum (above) was planned by Akbar himself and built by his son Jahangir (1569-1627) between 1605 and 1613. At Sikandra, the future builder of the Taj Mahal could therefore contemplate the mausoleum of his grandfather, built by his father. One might suppose that the earlier mausoleum would have influenced the later.

The historically-aware visitor would therefore want to view the Taj Mahal in the perspective of Sikandra, inter alia and vice versa. And many people have done so. The views of some of them on the Taj will be the subject of another posting on this blog. The present posting, however, concerns some of the many paintings, drawings, prints, photographs and written accounts of Sikandra that have found their way into historic British collections such as the India Office Library in the British Library, the British Museum, the Wellcome Library and no doubt others. This posting reviews some of the drawings and prints of Sikandra in the Wellcome Library, a repository of (among other things) records of sepulchralia of all kinds, and of Indian history. 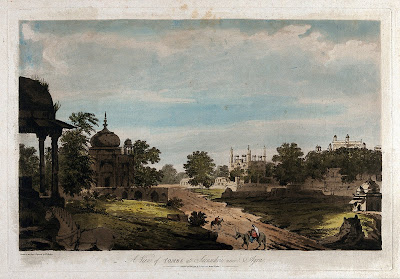 Coloured soft-ground etching with watercolour by William Hodges, 1788.
Wellcome Library no. 26689i

We start on the approach road, in the company of William Hodges (1744-1797). Under the patronage of Warren Hastings, Hodges had sketched Sikandra on the spot in the early 1780s, and produced this print in 1788 –a year in which India was in the news in England because Burke, Fox and Sheridan were railing against Hastings at the opening of the latter’s trial in Westminster. The road at Sikandra as seen by Hodges is a broad dirt-track with a couple of donkeys on it, surrounded on either side with dilapidated minor tombs scattered in a park. More inviting than the immediate surroundings is the prospect of fine buildings glimpsed through the trees on the far right. 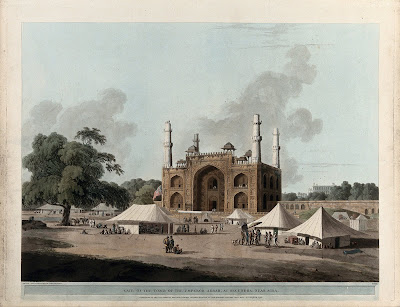 Coloured etching and aquatint by Thomas Daniell, 1795.
Wellcome Library no. 27432i

We next find ourselves tranported not only to the end of the road but also forwards seven years to the year 1795, when this aquatint by Thomas Daniell was published (above). It shows the leftmost of those buildings glimpsed through the trees: it is one of the gateways leading to the the mausoleum of Akbar. Though only a gateway, it is a grand building of sandstone topped with four white marble minarets. Not so long previously, vandalistic snipers have had some sport shooting the tops clean off those minarets. In the clearing in front of the gateway, a military camp is still in residence: it is a British one, to which the artist Thomas Daniell is attached. 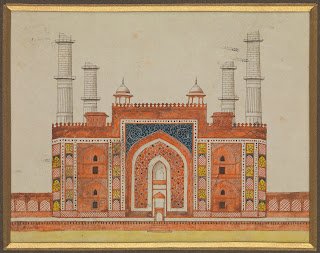 In the early nineteenth century Indian artists also produced views of the building, presumably for purchase in the main by western visitors. These are commonly called Company drawings (after the East India Company), and those in the Wellcome Library are characteristic examples. One watercolour (left: Wellcome Library no. 25209i is small and relatively simplified, though attractive enough to its previous owner to be put into a gold frame.

However, the painter of a larger one (39 x 56.3 cm., below Wellcome Library no. 579856i), spares no effort to do justice to the elaborate flower and leaf motifs realized in pietra dura around the central doorway. 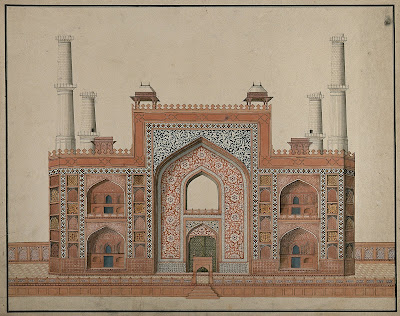 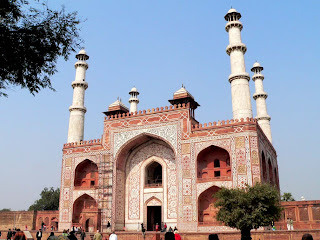 A photograph taken in 2008 (right) shows that the tops of the minarets have been restored. By comparison with the painting above, the photograph vindicates the great care taken by the watercolour artist. The minarets themselves may be called the grandfathers of those which stand at the four corners of the Taj Mahal. 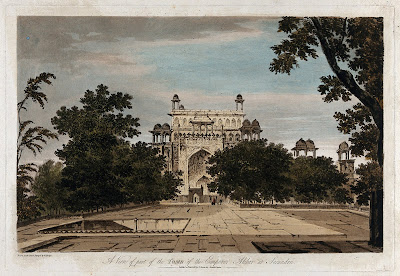 Soft-ground etching by William Hodges. Wellcome Library no. 26823i

The gateway at Sikandra leads to a long walkway at the end of which is the mausoleum of Akbar the Great. Starting again with Hodges in 1788 (above), he shows the building as being obscured by vegetation. There seems to be no picture of the mausoleum by Daniell, but there are plenty of Company drawings by Indian artists, made slightly later and showing the building (actually or ideally) cleared of trees and bushes, perhaps in order to show it as they imagined it to be at the time of Akbar’s interment. 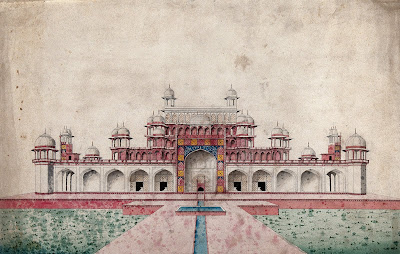 This view (above), like three others in the Wellcome Library, shows an interplay between a white marble colonnade on the ground floor and three sandstone terraces above adorned at the corners with domes of the Rajasthan type (chhatris). 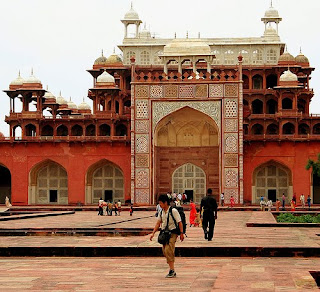 In current photographs of the building, that interplay no longer exists: the ground floor arcade seems to be painted red. All however show the topmost terrace as of crisply carved white marble, marking by its filigree craftsmanship and costly materials the cenotaph of Akbar, high above his actual tomb directly below in the crypt. 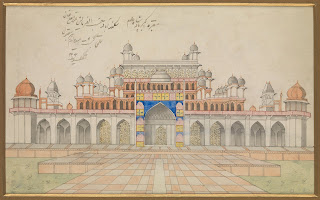 The Company paintings (such as, left: Wellcome Library no 25226i) differ among themselves in showing the setting of the building in varying perspectives in relation to its surrounding char bagh or Persian pleasure garden: the setting provides cooling channels for running water, gardens and pools. 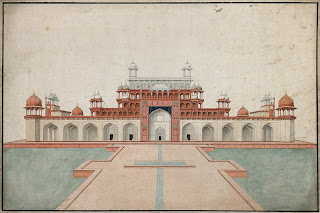 The effect of the setting is to emphasize that even the humblest of the living can here enjoy the created world more than Akbar, for all his power, now that he is dead. One small but highly detailed watercolour (right: Wellcome Library no. 578936i) is taken from a viewpoint so close to the central runnel that the base of the first story is no longer visible, apparently as a gesture to western artistic conventions. 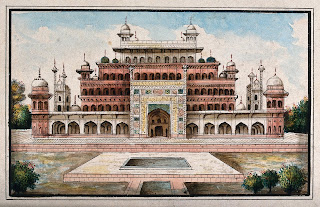 Finally, there is a complete outlier (left: Wellcome Library 575709i) in which the building is condensed so that the long first-storey terrace becomes the same width as the second storey. An inadvertent slighting of His Imperial Majesty! As we do not need to rely on this watercolour alone, we can afford to sympathize with the artist’s mistake. The noble resting place of the mighty Akbar, author of this and other admirable buildings, remains for the recreation and inspiration of those lucky enough to visit it.

Ernest Binfield Havell, A handbook to Agra and the Taj, Sikandra, Fatehpur-Sikri and the neighbourhood, London 1912