Item of the Month, November 2011: Certificate of attendance at William Hunter’s lectures 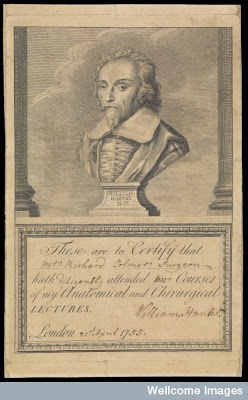 One of the pivotal figures in eighteenth century medicine, William Hunter (born on May 23rd 1718 at Long Calderwood, Kilbride, Scotland) was an eminent doctor, surgeon, obstetrician and teacher of anatomy. Educated in Glasgow and Edinburgh, he arrived in London in 1741 and by 1746 had begun to give lectures on anatomy and dissection in Covent Garden. By 1756, Hunter’s esteem had risen to the extent that he became a licentiate of the Royal College of Physicians.

Hunter regularly published essays and other works and became one of the outstanding physicians of the day, being appointed as physician extraordinary to Queen Charlotte in 1762. He had a school of anatomy built in 1770 in Great Windmill Street, London with an amphitheatre and what became an internationally famous collection. He died in March 1783 of a stroke following a long battle with that most recognisable of 18th Century diseases, gout. Whilst key to understanding the growth of the ‘man-midwife’ during this period, William Hunter’s career arguably now stands in the shadows of his younger brother, John.

The Wellcome Library acquired this certificate in May 2011. It dates from the Spring of 1755 when Hunter was still lecturing in Covent Garden and confirms that one Richard Colmer (surgeon) had satisfactorily completed anatomy and surgery courses under Hunter’s tutelage. The certificate, signed by Hunter, is headed by an engraved portrait of a bust of William Harvey, M.D., classical pillars to either side.

William Harvey was in born in Folkestone, Kent in 1578, educated at Canterbury, Cambridge University and Padua before joining the College of Physicians in 1604 and working at St. Bartholomew’s Hospital, being appointed as physician extraordinary to James I in 1618 then physician in ordinary to King Charles in 1631. As many readers of this blog will no doubt be aware, his 1628 publication, Exercitatio anatomica de motu cordis et sanguinis in animalibus presented his discovery of the workings of the heart and the circulation of the blood.

As suggested by the use of his image on this certificate, Hunter was a clear admirer of Harvey. We know that Hunter purchased and read keenly a number of works from Harvey’s own Library. Hunter also authored a manuscript – now held in the collections of University of Glasgow – which illustrates this interest: Historical Anecdotes of Dr. William Harvey by Wm. Hunter, collected from family papers, etc., communicated to me by Councillor Eliab Harvey of Lincoln’s Inn-fields, from the College book, from his own writings, from writers, from the Records in St. Bartholomew’s etc [1].

This certificate now joins the other material held by the Wellcome Library on William Hunter, which includes his classic work of obstetrics, The Anatomy of the Human Gravid Uterus Exhibited in Figures to other certificates of attendance and student notes made at his lectures. Indeed, our MS.2965 – which consists of notes made by William Brougham Monkhouse (later surgeon to H.M.S. Endeavour, 1768-1770 on Captain Cook’s First Voyage) – dates from the same period as Colmer’s certificate of attendance at Covent Garden.

Whilst establishing a connection between Colmer and Monkhouse is outwith the purposes of this blog, let’s instead consider the connections between Hunter and Harvey and one man of medicine paying homage to another.