Music of the blind 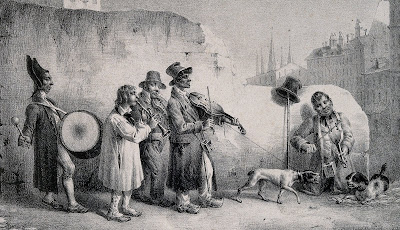 Blind musicians in Paris. Detail of lithograph by Martin Sylvestre Baptiste, 1828. Wellcome Library no. 16519i

An article by Ingrid Sykes in the latest issue of Medical History considers the blind in Paris from an unusual angle: their sound. One might think that the blind would sound the same as the sighted, but no, not in Paris in the years before and after the French Revolution. [1]

There was in Paris a mediaeval institution called the Hospice des Quinze-Vingts, founded by King Louis IX in the thirteenth century. The Hospice was a self-governing community of 300 (quinze-vingts, or 15 x 20) blind and partially sighted men and women, their spouses and their children. The hospice’s autonomy and antiquity, its often truculent and anarchic spirit, the fact that it was founded by a king and protected by a cardinal (the Grand Almoner, Cardinal de Rohan), all brought it into conflict with the new spirit of improvement and control in the French Enlightenment.

The character of the Hospice was expressed in its sound. The musicians of the Quinze-Vingts could be heard in Paris on the streets, at fairs, and at an all-night café. Fiddlers, woodwind performers and vocalists produced a raucous popular sound in which successive members would perform as soloists followed by a chorus in which all performers would join. The results were variously described as “depraved”, “threatening”, and even as “une scène si déshonorante pour l’espèce humaine” (a scene dishonourable to the human race). The politer sort would give them some small change in order to make them go away. The print above shows one of the Quinze-Vingts bands in their outlandish costume about to have a brawl on the street with a rival amputee musician. 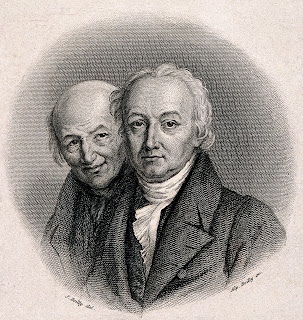 Left, Valentin Haüy,with, far left, his brother, the crystallographer René-Just Haüy. Engraving by the brothers Boilly, Jules and Alphonse; Wellcome Library no. 545537i

A performance by a Quinze-Vingts band made a deep, though not favourable, impression on the reformer Valentin Haüy (1745-1822). It was after hearing a performance of the Quinze-Vingts, described by him as “cette atrocité”, that Valentin Haüy decided to found a new institution for the blind, organized along more up-to-date lines. [2] This was the Institut des Jeunes Aveugles (Institute for Blind Youth), a typical Enlightenment institution. Secular, educational, managed by the sighted, run by the state and not by the church, the new organization’s nature was signalled by its name: not a mediaeval Hospice but a structured Institut. 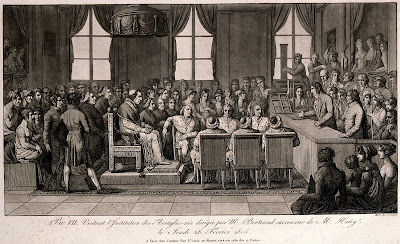 The character of the Institut was also signalled by its musical performances. Instead of the popular music of the Quinze-Vingts, the blind would be trained in the harmonic system of the composer Rameau: the new system was based on Cartesian mathematics and was published in a book ominously entitled Code de musique pratique (1761). 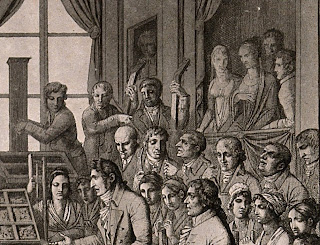 The Hospice had always existed and was there by Royal fiat. The Institut was an innovation and was there for a purpose. In the 1790s attempts were made by the revolutionaries to suppress the Hospice, invoking the inmates’ licentious life-style and spirit of independence. Suppression was avoided, but, despite their disparate characters, the Hospice and the Institut were amalgamated in 1805, largely for financial reasons. The print above recording Pope Pius VII’s visit in that year shows the more decorous appearance of the blind, their more harmonious means of music-making, and their more regimented organization under the Institut. 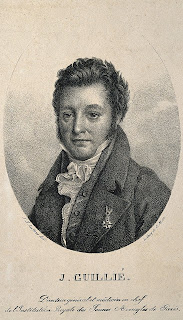 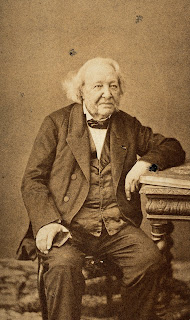 The merger did not last. In 1816 a new director, the despotic doctor Sébastien Guillié (above), determined to rid the Institut of its association with the Quinze-Vingts: he moved it away to a new site where, in the name of progress, he could carry out ophthalmological experiments on the blind children selected as his victims. [3] The Quinze-Vingts musicians continued their performances on the street for some years more, but could not defy change indefinitely: their building is now the site of a modern ophthalmological centre, the Centre Hospitalier National d’Ophtalmologie des Quinze-Vingts à Paris.

There is more to it than that, and more is provided in the article, which is available free online. One last point: the whole story would provide marvellous material for an opera. Richard Strauss and Clemens Krauss wrote Capriccio about different genres of drama and the relation between words and music. Bertolt Brecht and Kurt Weill included in The Threepenny Opera street songs and conflict with the police. Perhaps the authors of Les Misérables would like to produce a successor to those works, based on the struggles of the Quinze-Vingts? There would be a dramatic conflict between the two types of music, the protagonists on each side would provide plenty of character, and there would be scope for a variety of indoor and outdoor sets. And Victor Hugo himself could have a cameo role: according to the article, he was one of the champions of the Quinze-Vingts in their struggle against bureaucracy.

[3] Zina Weygand, The blind in French society from the Middle Ages to the century of Louis Braille, Stanford, Calif.: Stanford University Press, 2009, pp. 261-267 (find in the Wellcome Library here)

2 comments on Music of the blind