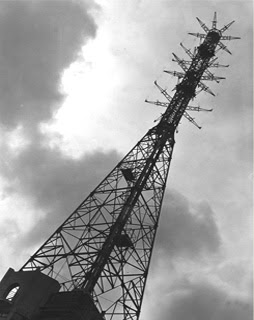 Today has seen the BBC celebrate 75 years since the launch of the world’s first regular television service.

Given their current popularity, it’s no surprise that the daytime schedules of both BBC1 and BBC2 have today (as on most other days) included a number of antiques shows – Bargain Hunt, Flog It! and Celebrity Antiques Roadtrip.

However, the origin of such BBC antiques shows – and let’s not forget the long-running Antiques Roadshow, nor it’s forerunner Going for a Song – may have an intriguing Wellcome connection…

The Wellcome Library holds a series of newspaper cuttings, collated by the Wellcome pharmaceutical business after its co-founder Sir Henry Wellcome’s death in 1936. These cuttings not only include an array of obituaries from across the globe, but newspaper reports from the next few years on the establishment of the Wellcome Trust and the early sales of objects no longer deemed appropriate to be part of Wellcome’s collection.

One such cutting dates from the 13th February and is from the Sunday Observer. “Television Pre-View of Auction – Model Ship Collection”, is its title and the article is worth quoting in full:

“For the first time an important auction sale has had a television pre-view.

All three television programmes from Alexander Palace on Thursday included a selection of the 200 ship models collected by the late Sir Henry Wellcome. Tomorrow they will be offered for sale by auction at Alford House, Princes Gate, Knightsbridge.

While Mr M. B. Roberts explained their oddities, models of ships floated down the centuries and across the television screen. There was an Egyptian barge wanting but a thumb-sized Anthony and Cleopatra for perfection. Under the sun-smitten canopy of a Burmese state barge smooth-bronzed royalty sat.

A Chinese houseboat had the carved elaboration that rich merchants seek, but a galleon in silver had less of the spicy East about her. Her longest voyage had been from table-end to table-end, her hull a port decanter.

More curious was the paper filigree boat of no recognisable design, but of most fragile build. An ostrich egg-shell made her hull, hens’ eggs her row-boats. Strange me and stranger fishes tramped her decks and frolicked in her little pot of ocean.

Lastly, there were the wooden walls of England reduced to a foreman’s length – a stout original dockyard model of a 64-gun late eighteenth century man-o’-war. She had a dignity that made Mr Roberts wish for her a home in some national museum.

Whilst considering when a day’s schedule on the BBC could feature only three programmes, let’s also ponder whether this was the start of the BBC’s auction and antiques broadcasting.

It should also be said that this isn’t the only connection between the early days of television and Sir Henry Wellcome – there’s a more direct link but it’s one we’ll save for a future date. Keep watching this space…