The Giant Ape in the Library

Quick – what’s the connection between a hundred-foot rampaging gorilla and the Wellcome Library?

Well, it wouldn’t be a common sight in the reading room, and although stepping out onto the Euston Road has its hazards they usually relate to heavy traffic and air quality, not colossal primates. There’s a thread linking the two, however, and it runs through our manuscript 7797. 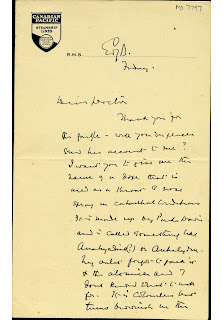 On the face of it, MS.7797 is an unremarkable little piece of correspondence. The letterhead indicates that was written on an ocean liner – it’s actually dateable from external evidence to the early 1930s, the great heyday of Transatlantic liner travel, the ship being the Empress of Britain belonging to the Canadian Pacific Line. The recipient is addressed only as “Dear Doctor” – one presumes this is the ship’s medical officer. The writer is clearly suffering from problems in the throat – he thanks the doctor for a gargle he has been given, and asks about a nose and throat spray that he has used in the past when suffering from catarrh. His valet, he explains, forgot to pack both his normal supply of the medication, and the atomiser used to administer it, and he is trying to work out what it is that he should ask for to replace this. 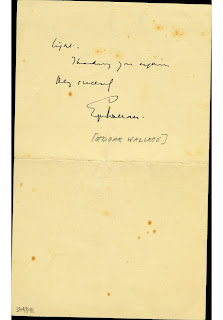 So far so good, but where do the giant apes come in? Well, turning the page we see the writer’s identity, and it takes us into the reliably fascinating world of Edwardian pulp fiction: this is the thriller-writer Edgar Wallace (1875-1932). Wallace was born the illegitimate son of actors and had to make his own way in the world: drifting through various jobs in his teens and early twenties, he found his metier when he enlisted in the Army at the time of the Boer War, at the age of 25. Not that he was cut out to be a soldier: he disliked the infantry (he was physically lazy and completely unsuited to a life of square-bashing) and arranged a transfer to the Royal Army Medical Corps, then moved on from here to the Press Corps, where he found his niche. (Our RAMC/1707 documents him at this time of his life, performing at a military entertainment by reciting a Kipling poem.) From here on his career was built around the Fleet Street core skill of producing large amounts of readable text quickly and to deadline: journalism for the Daily Mail and similar middle-brow outlets, and a series of thrillers beginning in 1905 with The Four Just Men. Various apocryphal tales are related about the speed and fluency with which he produced his works: one of these has him dictating an entire novel over the course of a weekend. By the early 1920s, one of his publishers estimated that a quarter of the books read in England that year were by Wallace. 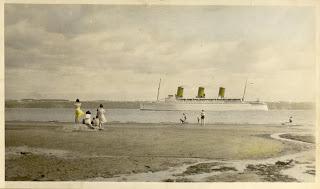 The ability to produce text quickly and in a way that reflected the public’s taste reliably soon had Wallace receiving calls from the film industry, and it is here that our letter comes in. In late 1931 Wallace sailed for the United States, engaged by RKO to work as a “script doctor”. This letter was written on the voyage across the Atlantic (the name of the ship enables us to tie it to this journey) – although he doesn’t give us the exact date, we’re in November 1931 and thus pretty much exactly eighty years ago. In Hollywood, prolific as ever, Wallace cranked out various scripts to order, including – in a pulp-fiction summit meeting – one for The Hound of the Baskervilles. Most notable, however, was the project on which he worked from December 1931 to February 1932, collaborating on “a gorilla picture” with producer Merian C. Cooper. This was to be King Kong, which of course remains to this day one of the most famous products of the Golden Age of Hollywood.

It was also the culmination of Wallace’s career, although he never lived to see it: by the time the film was released in 1933 he was dead. A lifetime of too much food, several packs of cigarettes every day, lots of sugary tea and as a little exercise as possible (the classic Fleet Street lifestyle, although to do Wallace justice he was a virtual teetotaller, omitting one of the classic journalist’s vices at least) caught up with him in late January 1932, when a doctor identified that he had been suffering from severe diabetes, untreated, for years. As if in response to the diagnosis, Wallace fell into a coma almost immediately and died in Beverly Hills on February 7th.

We see him in MS.7797, then, in the very last months of his life, but at a high point in his career: about to embark on the project that would outlive him and the reputation of his books. Wallace’s novels are still in print (at least, some of them – he wrote over 170 books and many require a search of second-hand bookshops) but although Sanders of the River and The Four Just Men have an honourable and secure place in the history of pulp, they don’t have the massive public profile that they did in Wallace’s heyday. King Kong, however, lives on, and has been paid the ultimate Hollywood compliments of remakes and spinoffs. In a sense, having produced the script Wallace’s work was done, his place in history secure. It’s unlikely that the next remake will feature the Wellcome Library, with a screaming Fay Wray held aloft above 183 Euston Road. Still, we like to feel proud of our little foothold in this landmark of popular culture.

Images
MS.7797, front.
MS.7797, back, including signature (and annotation by a previous owner of the letter).
R.M.S. Empress of Britain, passing through the Saint Lawrence River near Quebec. Taken on July 10th in 1937, on the “Ile d’Orléans” by Horace Bélinge, now deceased. Made available under Creative Commons (http://creativecommons.org/licenses/by-sa/3.0/ ) through Wikimedia.
Original poster for King Kong, 1933, from Wikimedia, now out of copyright in the USA, EU and many other domains (see Wikimedia page for details of copyright status).