The International Confederation of Midwives

The cataloguing of the records of the International Confederation of Midwives (ICM) is now completed and the catalogue is available on-line at the Wellcome Library, reference SA/ICM. The Library is extremely grateful to the International Confederation of Midwives for funding a temporary post to catalogue this extensive collection.

The idea for an international midwives’ organisation started in Belgium in 1919, when many national midwifery associations combined to form an International Midwives Union, which held its first International Congress in 1922 – at that time only representing European countries. Further meetings were held in 1932, 1934, 1936 and 1938; despite the loss of organisational records during the War, reports from these Congresses survive, and can be found in SA/ICM/R/1, Communications of the International Midwives Union. They offer an interesting insight into the issues facing midwives in the context of the 1930s: increasing mass unemployment, urban and rural poverty and poor nutrition, the rise of fascism and latterly, impending war. The 1936 Congress, for instance, was held in Berlin, and hosted and attended by the German government. While the Fuhrer was not able to personally attend, Hitler sent messages and various government ministers gave speeches exhorting the Congress to address the primary issue – in the government’s eyes – of the falling birth rate, and of the need for all countries represented to take urgent action and “promote motherhood”. The issue reporting this Congress includes a rather chilling fold-out photograph taken of the proceedings, showing fully uniformed SS and other Nazi government ministers addressing the Congress, made up of European midwives from Belgium, The Netherlands, France, and Great Britain. The tension created by the drive to war is further reflected in the records of the 1938 Congress in Paris, which concludes with a final resolution calling on Europe’s governments to “make peace, not war”. The next Congress, planned for 1941, did not take place because of the outbreak of war, and subsequently all records of the organisation from 1922, held in Belgium, were lost.

Based in France after the Second World War, the International Midwives’ Union agreed in 1953 that the first ‘World Congress’ of midwives should take place in London in 1954, the culmination of a drive by leading British and European midwives to re-start the international organisation after the upheaval of WW2. At this Congress the ICM adopted its new title and constitution, including a Triennial International Congress and administrative cycle. The ICM Secretariat was based at the Royal College of Midwives (RCM) headquarters in London. The RCM President, Miss Nora Deane, was elected first ICM President and Miss Marjorie Bayes elected Executive Secretary, a post she held until 1975. English, French and Spanish were now the official languages of the Confederation, having been English, French and German prior to the War. Membership of the ICM is of national midwifery associations, not individual practitioners. The RCM is the UK member association. 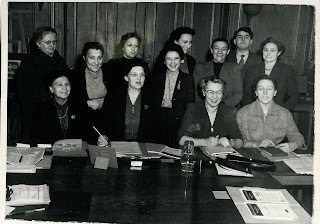 Records of the 1954 Congress (extensively covered in the collection with reports and photographs of proceedings found in SA/ICM/R and SA/ICM/U respectively) demonstrate the organisational success in ensuring midwives from around the world attended, and the real enthusiasm and drive of the founder members, many senior and renowned midwives in their respective countries, for promoting the role of the midwife as central to improving the standard of maternal and child health globally. Their approach reflected a wider international consensus, in the context of post-war political and economic recovery, of the need to improve maternal mortality and morbidity in resource-poor and developing countries, and to survey the current state of national midwifery training, status and practise in order to develop specific, locally applicable strategies. As the only international midwifery organisation affiliated to the United Nations (UN) and the World Health Organisation (WHO), the ICM played a leading role in international collaborative efforts to improve maternal and child health (MCH) over the following 25 years, and much of the collection relates to these activities.

In 1961, a Joint Study Group (JSG) was formed by the ICM and the International Federation of Gynaecology and Obstetrics (FIGO); the JSG was based at the ICM Secretariat, and Marjorie Bayes, ICM Executive Secretary, acted as Secretary (SA/ICM/M). Its first task was to carry out a 4 year international survey of midwifery and maternal health, the first of its kind, published in 1966 as Maternity Care in the World, providing information and data on 174 countries covering approximately 75% of the world’s population. This survey, later updated in a second edition published in 1976, provided the basis for the JSG’s aims and objectives: to promote family planning (FP) as an integral part of the midwife’s role; the establishment of common training requirements for a minimum international standard and uniformity of licensure regulations for midwives; and later, addressing the role of untrained birth attendants. The JSG developed a programme of Regional workshops, seminars and training for midwives, but was continually hampered by lack of funding; in 1972, its work was supported by a grant from the United States Agency for International Development (USAID), which established a new ICM/USAID Project enabling the continuation, in close collaboration with FIGO, of the Regional workshop programme (SA/ICM/L).

The ICM records from this period offer a wealth of material relating to country-specific population, health, and economic data, maternal and child health, and the status and practice of midwives and other health care providers, e.g. Traditional Birth Attendants (TBAs); and the numerous Workshops and projects organised and/or sponsored by the ICM, including post-project reports and evaluation. The material also reflects the geo-political shape of the world at this time (e.g. the Cold War, prior to the collapse of the Soviet Union), and the political and cultural context in which international MCH programmes, and specifically ICM staff and local midwife organisers, worked to deliver projects and training across countries in Africa, Asia and Latin America (SA/ICM/K, SA/ICM/L, SA/ICM/M). The promotion and provision of family planning in some Latin American countries, for instance, was frequently subject to and in conflict with national health policies concerned with falling birth rates and the promotion of the family, as well as the influence of the Catholic Church on reproductive health legislation. Regional workshops in Africa, often years in planning, could be severely disrupted by local political conflict, or poor communication and travel infrastructure.

The USAID grant was terminated in 1980, and the ICM/FIGO JSG dissolved in 1982, with the creation of a Liaison Group to link the activities of FIGO standing committees with relevant international organisations in the field of MCH. Having adopted the regional structure of the WHO, with representatives at the regional offices in New York, Geneva, Vienna, Manila and Brazzaville, the ICM continued its collaborative work to achieve common goals in reducing maternal mortality, now the leading cause of death among women of reproductive age in developing countries, and to lobby for specific midwife representation at World Health forums and assemblies. The Safe Motherhood Initiative (SMI) launched by the WHO in 1987 built on the work carried out in the 1970s and early 1980s, and became a major focus of ICM cooperation with WHO/UNICEF. The ICM immediately adopted and worked to implement the 1987 WHO Action Statement on Safe Motherhood in support of its programme to improve obstetric care and outcomes for women, and to prevent the huge burden of unwanted pregnancies by increasing access to family planning (SA/ICM/P/1). The global challenge to reduce the MMR by 50% by 2015 was formalised as one of the Millennium Development Goals (MDG) in 2000, and continues to frame ICM policy and activities.

Another key theme during the 1980s and 1990s was the emerging HIV pandemic and its devastating impact on reproductive health in countries with already high maternal mortality, with consequences for midwifery education, training and practice. Material relating to HIV/AIDS can be found in SA/ICM/K, and SA/ICM/P/1 and SA/ICM/P/2.

The ICM communicates with its member associations via a Newsletter (SA/ICM/S), and regular Letters to Members, which include a summary and update of ICM activities, the Triennial Congress and election of Executive Committee, key policy initiatives, membership information, Regional reports. The membership records and correspondence (SA/ICM/G and SA/ICM/H) include fascinating information about local infrastructure, regulation, training, remuneration and status of midwives in respective countries, and also demonstrate the contrast between conditions in developed and developing countries for midwives attempting to organise and participate in professional activities.

The history and records of the Confederation are particularly relevant today: at time of writing, UN reports highlight the challenges of meeting the MDG target to reduce maternal mortality, in the context of the global population increase and failure to significantly reduce fertility rates, particularly in sub-Saharan Africa. The ICM remains at the forefront of international policy development to influence and promote midwifery at global and national levels, and to pro-actively support international strategies to improve maternal and child health, for the achievement of ‘Safe Motherhood’ for all women.

The ICM held its 29th Triennial Congress this year in June, in Durban, South Africa. For post-Congress reports, and for more information about current activities, see their website: http://www.internationalmidwives.org/.

(We may add as a footnote that there have also been recent additions to our existing catalogue of the papers of the influential worker for global MCH, Cicely Williams (1893-1992)).