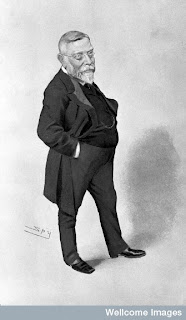 In 2002, the Wellcome Library’s online catalogue of archives and manuscripts went live, replacing various large printed manuscript catalogues and several hundred typed lists of archives. Putting all this data online involved a campaign of retroconversion, the majority as part of a dedicated project and the remainder, as has been noted here before, undertaken over succeeding years by the archives department in odd snatches of time (typically, something to be done on a quiet Saturday morning). Almost all catalogues are now converted, with the Chartered Society of Physiotherapists (SA/CSP) the only major collection still to appear on line in full (this one is on the stocks and approximately two-thirds converted).

Converting a catalogue is (relatively) simple, although the archivist faced with a 1980s word-processed document whose page-layout is generated entirely through the use of tab-stops might snort derisively at that claim! A more difficult issue is how to capture the information that was often held in indices, some many pages long, at the end of the catalogue. Turning a line in a catalogue that tells one that file PP/BAR/C/234 is a file of correspondence from people with surnames A-H, covering the following dates, into a database record, is fairly quick. But how to capture and store usefully the information held in an index of correspondents made up of lines like this one:

Well, you could simply cut and paste the index into the Notes field at the collection’s top-level record, and get the desired result instantly. For some small collections with short indices this is what we have done. For the very long index, however – forty, fifty, one hundred pages long – this is obviously unsuitable: no-one is prepared to hold the scroll-down button for minutes at a time to reach the desired name. (Indeed, much thinking on web-design suggests that asking readers to scroll down at all loses up to a third of one’s audience.)

In an ideal world, Robert Bridges’ and George Buckston Browne’s names would of course appear on the catalogue records for each of the eight files listed in the sample line. To undertake this, however, would mean embarking on a lengthy process of handcrafting, picking each line apart entry by entry: just think of the two lines above, which would require one to visit and edit eight separate database records, and multiply that by hundreds. Readers would wait years for the information to be made available on that basis. What is needed is something that breaks up the index in at least a partly granular fashion, whilst being relatively quick and, ideally, something that can be done through routine, mechanical processes.

In recent years we have experimented with various processes that take word-processed indices and break them up using search-and-replace commands, splitting data in a way that enables them to be put in a spread-sheet and sorted before returning to word-processed form. We will spare you the details! – the upshot, however, is that with the expenditure of only a little time, many pages of index can at least be broken up into the data that relates to individual sections of the catalogue, thus enabling readers to make a better judgement of which letters relating to an individual are relevant, and which are not. In collections of family papers, in which each section may correspond to a family member, this is particularly useful, as it may be a particular family member, and him/her alone, whose correspondence is of interest. With some thought about the way the data in the original catalogue is shaped, this process can be done in hours or days rather than the months required to handcraft records for individual files: the work of the proverbial quiet Saturday, rather than a long-running process.

This process has been applied to various collections in the past, most notably the Hodgkin family papers (PP/HO). The latest collection to receive this treatment is the papers of Sir Thomas Barlow (PP/BAR), Royal physician, and his family. The Barlow papers span almost a century (Barlow lived a long life, from 1845 to 1945, and the collection continues with the papers of his children), and a large proportion is correspondence, covering a wide range of activities: not merely medicine, but also the arts, philanthropy and personal family letters – the last including letters from his son Basil from hospital after being wounded on the Western Front, wounds from which eventually he died. The range of correspondents, then, is a wide one. All the very varied names set at intervals into this article, in italics, are drawn from the Barlow catalogue’s index. The Barlow catalogue has been available on the online catalogue for some years now, but it is probably safe to say that the inclusion now of the original cataloguer’s hard work indexing the papers virtually doubles the value of the collection to the researcher. The reader is invited to look at the section-level records for the collection (go to the “tree” of the collection here and click the letter next to any of the entries to get into detailed section-level records) or simply to search for a name of their choice to see if it is in there (go to http://archives.wellcome.ac.uk, put the surname into the Any Text box and put PP/BAR into the Reference box). There will be the names listed above in italics and many, many more, including