Dr Alun Withey is an academic historian of early modern medicine, technology and the family. Here, he describes the inspiration and contexts of his new book, Physick and the Family: Health, Medicine and Care in Wales, 1600-1750, which includes research carried out in the Wellcome Library. 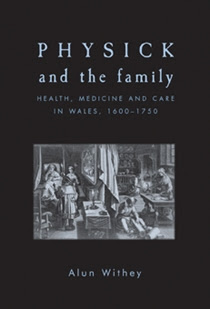 I never set out to be a medical historian. Whilst studying for my History BA, I was struggling to find a topic for my dissertation. I knew I wanted to do something connected to Wales and the seventeenth century, and settled upon the Civil Wars. I visited a local record office, and was introduced to a source that nobody had done much work on…a commonplace book. Amongst the notes and jottings were several medical remedies that looked interesting to the untrained eye. My curiosity was piqued and I decided to look into it further. Seven years, and a PhD later, I’m still looking!

Welsh medical history, at least in terms of the early modern period, has often been overlooked. In 1975, the editor of a collection of essays on the subject concluded that there were problems caused by a lack of medical sources for Wales. Such work that had been done tended to concentrate on the folkloric and magical elements of medicine in Wales, doubtless an important element of Welsh heritage, with the legendary ‘Physicians of Myddfai’ and their remedies garnering a lot of attention. The problem with ‘folklore’, however, is that it is a loaded term; Although magical remedies, symbolism and the ‘cunning man’ were important components, I felt that they also somehow contributed to a rural caricature, and made Wales seem remote, cut off from the wider world by its language and sometimes awkward terrain.

Physick and the Family, the first academic monograph on early modern Welsh medical history, set out to give what I see as the other side to the story of Welsh medicine. In doing so I not only wanted to write a new medical history of Wales, but also to use Wales as a test-bed to address much broader questions in medical history. In this sense, a new study wouldn’t just fill in gaps, but could provide a credible new investigation of the experience of sickness, health and care in the early modern period. 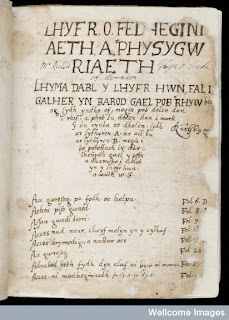 In many ways, the sources, dictated what questions could be addressed and answered. Contradicting the earlier view about Welsh sources, it soon became clear that there was actually a wealth of source material – much of it untapped. The book draws upon Welsh remedy collections, of which a good number survive – one especially rich example surviving in the Wellcome Library, known as the ‘Welsh Leech Book’ (MS.417). A study of the types and derivations of Welsh recipes proved insightful into the movement of medical knowledge both into, and within, early modern Wales, and not least in changing medical terminologies in the Welsh language. Diaries and letters yielded much useful information about sickness, the ways in which people described their symptoms, and also important factors such as the social rituals and conventions of sickness and the sufferer.

But the book also uses different types of source material, and it was often this that yielded the most interesting and surprising results. A detailed study of probate inventories, for example, looked at evidence for medical paraphernalia in the early modern home, but also for evidence, in shop inventories, of medicines for sale. From studies of shop inventories in three Welsh counties, it is clear that even small, remote village shops often sold a range of medical goods.

Other records such as those of the Old Poor Law were revealing in matters of care. Who, for example, cared for the sick, and what measures did the parish take to look after its own sick poor? The survival of some astonishingly detailed poor law records for one particular Welsh parish, allows for a detailed case study of the often sophisticated structures of care available to the early modern patient.

The book is intended to have a broad appeal, and not just to those inside the Welsh borders. It has been written to speak to anyone with an interest in medical history certainly, but also in social history more widely, since it is at heart a book about the experiences of ‘ordinary’ people. But as a regional history, it also encourages a more nuanced view of the early modern medical world, and one that takes into account the often important variations that could be caused by topography and geography, as well as language and literacy.

I said earlier that this was the first book of its kind; technically it is. But it is also worth mentioning a hidden gem in the Wellcome Library archive. In the 1920s an eminent physician, Dr David Fraser-Harris, was busy compiling his ‘History and Lore of Kymric Medicine’ – a richly detailed study of Welsh medical history and one in many ways far ahead of its time. Sadly, he died before it was completed and it now survives only in many boxes and unfinished drafts. In seeking to say something new about Welsh medicine we obviously shared a similar goal. I hope that he would have approved of my modest efforts some 90 years later.

The spirit of Christmas

Spotlight: a summer fête in Powys