HIV/AIDS at 30: Spreading the Word 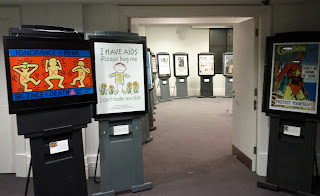 To mark World AIDS Day (1 December) this year, BHIVA (the British HIV Association) held a World AIDS Day Event in collaboration with the Wellcome Trust on the theme HIV/AIDS at 30: Back to the Future. 2011 is the thirtieth anniversary of the first description of AIDS — a milestone in the continuing epidemic that has claimed the lives of millions of people worldwide. While reflecting on the experiences and work of the past 30 years, eminent speakers reviewed today’s challenges, and looked ahead to consider how the knowledge of the past will inform future strategies. 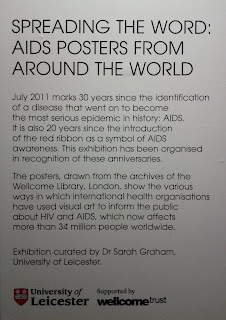 One aspect of the epidemic that was considered was the way in which health authorities, activists and charities around the world have tried to prevent its spread by publicity, including posters. The Wellcome Library now has over 3,200 AIDS posters from many countries. The exhibition Spreading the Word: AIDS Posters from Around the World is a selection of 24 posters chosen and interpreted by Dr Sarah Graham of Leicester University, and shown earlier this year at the New Walk Museum in Leicester. 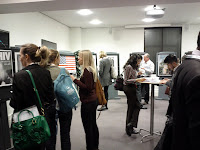 The posters emphasize the range of graphic techniques adopted and the variety of ethnic and social groups at which they were directed. Spreading the Word was also on display today at the BHIVA/Wellcome Trust meeting (left) and was much appreciated by those attending.

The latest AIDS poster to enter the Wellcome Library catalogue (right) must be one of the most allusive and discreet in the entire collection. It was published on World AIDS Day in 1994 by UNESCO in Paris, for Hispanic populations in which drug use was a source of transmission of the virus. Unlike the crashingly explicit posters (mostly from Germanic and Anglo-Saxon countries), it refers to open discussion within the family and use of counselling to help drug users, with no obvious indication to the casual passer-by that its end-purpose is to save them from contracting HIV through needle re-use. 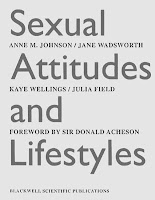 Among the work publicised at the conference was a recent volume in the series Wellcome Witnesses to Twentieth Century Medicine, which was published in November 2011. It concerns the controversial National Survey of Sexual Attitudes and Lifestyles (NATSAL) which was launched in 1990. “A proposal that the UK Department of Health would fund it, after scientific scrutiny by the Economic and Social Research Council, was vetoed at government level – some say by Mrs Thatcher herself – on the grounds that this would be an unacceptable intrusion into private lives. This decision hit the headlines (first in The Sunday Times), as did the decision, some four weeks after the story broke, by the Wellcome Trust to step in and fund it instead. There is a similar story to be told of obstruction from the Bush White House,which forbade funding from the National Institutes for Health (NIH) for the American survey” (pp. xxi-xxii).

The phrase “some say by Mrs Thatcher herself” is backed up on p. 67 by a separate statement in the book (Appendix 3, pp. 66-68) by Dr Peter Williams, Director of the Wellcome Trust at the time, who received that account of events in a phone call from the Chief Medical Officer, Sir Donald Acheson. A note by Professor Virginia Berridge (p. 61) suggests that the reality behind the scenes may have been more complicated, but that at any rate Downing Street was happy to go along with the veto. More of the raw materials for this episode are set out in the volume, in the usual Witness Seminar manner: the spoken memories of people who were involved in the events at the time, provided with scholarly commentary and often with competing points of view. It makes compulsive reading. It is available in hard-copy from booksellers and Amazon, and available free of charge on the web as a PDF. [2]