On the 27th December 1831, one of the most famous expeditions of the nineteenth century was launched, as it was on this day, 180 years ago, that the second voyage of HMS Beagle begun. As such, let’s mark this anniversary by briefly highlighting a manuscript we hold, written by the naturalist on board the Beagle at the start of its voyage. Quick question first – what was this person’s name?

If your answer is ‘Charles Darwin’, then the wailing of the klaxons of QI be upon you – the correct answer, and the man who also held the post of ship’s surgeon, was Robert McCormick (1800-1890).

McCormick’s diary for the years 1830 to 1832, held in the Wellcome Library as MS.3359, helps to elucidate McCormick’s relationship with both Robert FitzRoy (the Beagle‘s captain) and Charles Darwin (who was on board as a gentleman companion to FitzRoy, albeit one with a knowledge of geology and the natural world). 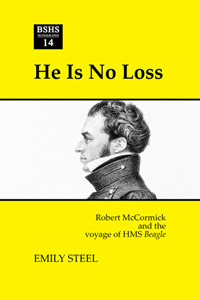 McCormick’s diary forms the basis of a recent monograph published by the British Society for the History of Science: ‘He is No Loss’: Robert McCormick and the Voyage of HMS Beagle by Emily Steel.

The monograph – which also includes a transcription of McCormick’s diary – examines McCormick’s attitude to Fitzroy and Darwin and why it was McCormick left the Beagle in April 1832.

McCormick’s diary may not be as famous as some of our other holdings, but its (relative) unfamiliarity is arguably a virtue: it’s one of the manuscripts held by the Wellcome Library that directly reminds us that there can be disputed accounts of ‘familiar’ historical events.