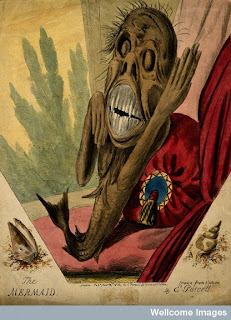 After a recent sighting in Bromley, a merman once owned by Henry Wellcome, and now in the collection of the Horniman Museum, is making an appearance north of the Thames at the headquarters of the Royal College of Physicians, beside Regent’s Park in London.

As part of this loan, next Tuesday 20th December sees a free lunchtime event at the Royal College of Physicians, Fakes, Forgeries and Quacks. The event will consist of two talks: Ross MacFarlane, Wellcome Library, will place the merman in the context of Henry Wellcome’s wider collections and Paolo Vascardi, Horniman Museum, will trace the history of mermaids and reveal a tale of fraud, bankruptcy and shipwrecks.

The event starts at 12.30pm and will last just over an hour. No booking is required and directions to the Royal College of Physicians are available from their website.

Image: A grotesque mermaid, amidst luxurious cushions and drapes, and framed by two shells. Coloured lithograph by E. Purcell, 1822 (Wellcome Libary no. 3332i).