By Ross Macfarlane | Events and Visits, From the Collections 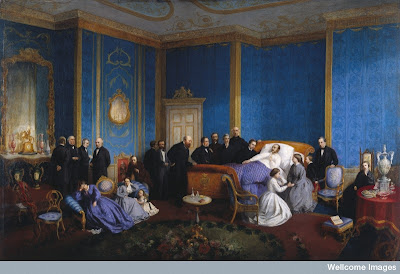 In this week’s episode of BBC Radio 4’s Random Edition, presenter Peter Snow marked the 150th anniversary of the death of Prince Albert.

The programme focused on how the Prince Consort’s death was reported in one issue of the London Daily News, but also featured recordings made at a number of relevant locations to Prince Albert’s life and legacy, such as Osborne House, Windsor Castle and the Royal Albert Hall.

One segment of the episode was recorded here at the Wellcome Library, in which Peter Snow came face-to-face with the painting shown above, a vast canvas depicting Prince Albert on his deathbed. The programme concludes with a discussion over competing theories over the cause of the Prince Albert’s death.

Random Edition: Prince Albert is available on the BBC iPlayer to listeners in the UK until Wedensday 21st December.