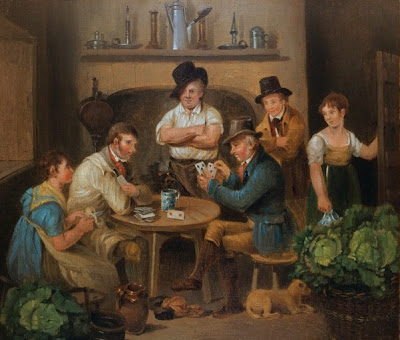 A game of cards. Oil painting by Stephen Jenner. Wellcome Library no. 47409i

In England in 1840, Queen Victoria married Prince Albert, Charles Dickens published The Old Curiosity Shop, and a certain E. Estridge passed the time by drawing on playing cards. He (or she, but perhaps more probably he) took a complete pack manufactured by the firm of Hardy & Sons, and doodled contemporary scenes on each of the numbered cards, using the pips (the spades, hearts, diamonds and clubs) as human heads. Each of the royal cards carried a letter or number which together spell out “E. ESTRIDGE 1840”. 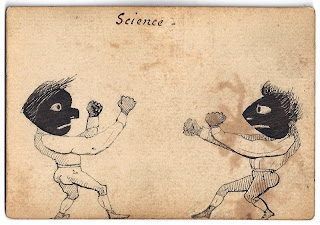 The Two of Spades (left) must be either a meeting or a confrontation between two black figures (since Spades and Clubs are black). Estridge has shown them as two black pugilists exercising the science of boxing. Many books had been published about the science of boxing, including Captain John Godfrey’s A treatise upon the science of defence of 1747 and Thomas Fewtrell’s Boxing reviewed; or, the science of manual defence, displayed on rational principles, London, 1790. And at some stage boxing acquired the sobriquet “the sweet science“. The Oxford English Dictionary also gives as the meaning of spade “Slang (orig. U.S.) depreciative and offensive. As a term of contempt or casual reference among white people: a black person, esp. a black man. Formerly (among African Americans): a very dark-skinned black person.” But as the earliest quotation given is American and dates from 1928, it would surely be incorrect to read that meaning into this English drawing. 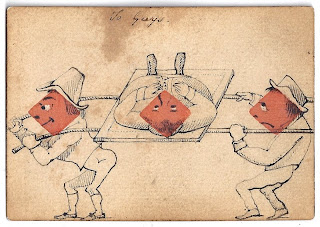 The Three of Diamonds (right) contains three figures: what about two people helping a third? Estridge does that by showing two men carrying an injured person on a stretcher “To Guy’s”, i.e. to Guy’s Hospital, then as now in Southwark, near London Bridge. This patient there follows in the tracks of those Southwark residents who had recently been taken to Guy’s and immortalised in the pages of Richard Bright’s Reports of medical cases (1827-1831). 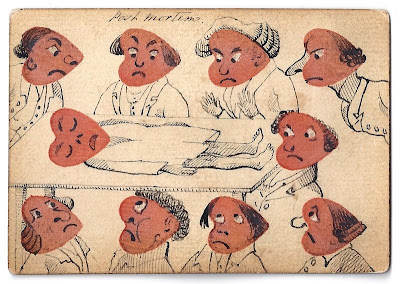 The Ten of Hearts suggests a team game with ten players or a well-ordered ceremony of some sort. Estridge makes it a post-mortem examination (above), conducted by a Georgian surgeon in a wig, in the presence of eight other witnesses. Several other scenes in the pack also show people in Georgian dress, suggesting that Estridge was old enough to recall life from before 1800. His post-mortem examiners are not modern medical coroners of the Thomas Wakley generation, but perhaps members of the old Company of Surgeons, dissecting a body in Surgeons’ Hall in the Old Bailey, and living on in folk memory into the reign of Victoria. The subject has certainly given the artist a lot of amusement in turning hearts into heads, with the closed eyes of the deceased contrasted with the staring eyes of the watchers.