Hermitage and heritage: Augustinians in history 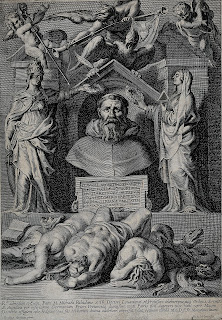 Austen (the surname of one of England’s best-loved novelists) and Austin (the capital city of Texas) are both abbreviations of the name Augustine. That name became popular from Saint Augustine of Hippo, Father and Doctor of the Church (354-430), philosopher and theologian (left: Wellcome Library no. 3493i).

In England the name Augustine later acquired added lustre from the Roman missionary Saint Augustine of Canterbury, who re-introduced Christianity to Britain in the 6th century. The earlier Augustine, Saint Augustine of Hippo, was a Roman citizen of the province occupied today by Algeria. At one time a professor of rhetoric in Rome and Milan, he returned to North Africa and died there after writing numerous works of theology and philosophy. His studies of such subjects as time, memory, mind, and magic are still much admired: today the School of Life in London recommends Saint Augustine‘s Confessions to its students, while a writer in a recent New York Review of Books boldly declared that he was “surely one of the mightiest intellects ever to walk this earth” [1].

The high intellectual standing of Saint Augustine of Hippo underlay the success of the Augustinian Order formed from various groups of hermits, and explains why he and members of his Order are so abundantly represented in the Wellcome Library. By Augustine himself the Library has an incunable edition of his De civitate Dei (Venice 1490), three incunable editions of his sermons, and many other works. 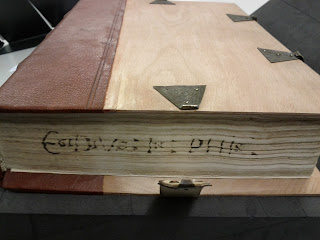 Of his followers, the Wellcome Library has nine editions of works by the Augustinian philosopher Giles of Rome (Aegidius Romanus, ca. 1243-1316), three of which (On the material of the heavens, On possible understanding against Averroes, and a Commentary on Aristotle’s Physica) are edited by another Augustinian called Giles, namely Giles of Viterbo (Aegidius Viterbiensis, 1469-1532), also a cardinal and a student of Jewish mystical writings. The Wellcome Library’s incunable edition of the work of the two Giles’s has the inscription “Egidius in Phis.” (Giles on the Physica) written on the bottom edge (above right): before the mid-17th century, books were generally stored with their edges facing towards the room (not their spines, as today), and the owner of this book in the sixteenth century evidently knew who “Giles” would be and what the “Phis” were. [2]

One of Giles of Viterbo‘s contemporaries north of the Alps was George Ripley (d. ca. 1490), a canon of the Augustinian priory at Bridlington, Yorkshire, whose scrolls of alchemical symbols have recently been discussed on this blog. 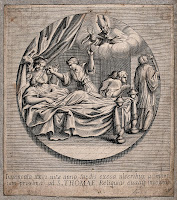 Another Augustinian of the same era was Saint Thomas of Villanova (1486-1555), Bishop of Valencia and a professor at the University of Alcalá, after whom many universities and schools are named. In the engraving on the left (Wellcome Library no. 11665i), a young woman finds her leg ulcers relieved after her cheek is brushed with a locket containing a portrait and a relic of Saint Thomas of Villanova.

The Wellcome Library has many writings by the Augustinian satirist and preacher Abraham à Sancta Clara (1644-1709), a famed communicator of his day both in Vienna and internationally.  The print below of a man literally dicing with death illustrates one of his popular books on death in the time of the bubonic plague. 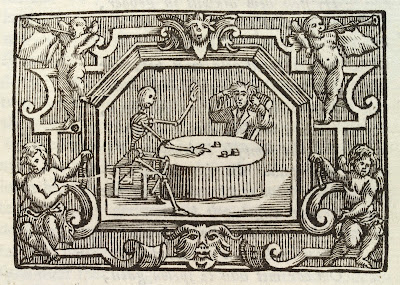 Nineteenth-century Augustinians include the experimental gardener Johann Mendel (1822–1884) — or Brother Gregor, to use his name in religion — after whom is named the Mendel University in Brno, Czech Republic (and, on a smaller scale, a meeting room in the headquarters of the Wellcome Trust in London). He was a member of the Augustinian Abbey of St Thomas in Brno, and from 1868 its abbot. In his horticultural work, Mendel grappled with botanical manifestations of the questions discussed by his predecessor Giles of Rome in the latter’s De formatione corporis humani, written around the year 1270. An up-to-date introduction to the work of the Augustinian Order today can be found in the website Augnet.

The most monumental Augustinian work in the Wellcome Library is surely a gigantic etching (approx 145 x 160 cm.) produced on twelve plates in 1614 by the Italian engraver Oliviero Gatti of Bologna (1579-ca. 1648?). It bears the heading Mysticae Augustinensis Eremi sacrum gloriae decorisq. Theatrum (“Sacred display of the mystic glory and distinction of the Augustinian hermitage”); for brevity the work is also called Arbor augustiniana (“The Augustinian tree”). 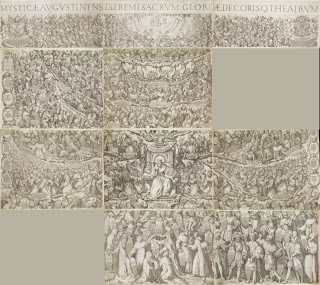 Gatti was commissioned to create this magnificent baroque print by two Augustinian friars, Marc Antonio Viani (from Bologna) and Paulus Vadovita (from Wadowice in Poland). Seven copies are known, not all of them now complete: the Wellcome Library’s copy lacks two of the twelve plates. The print exists in two states: one from 1614 dedicated to Pope Paul V and King Philip III of Spain, the other dated 1678 and with updated dedications to their successors, Pope Innocent XI and King Charles II of Spain: the Wellcome Library’s copy is of the first state. The print has been cleaned and conserved this year by Amy Junker Heslip in the Wellcome Library’s Conservation department; during conservation, the superb quality of the paper and the vigour of the etching were revealed. 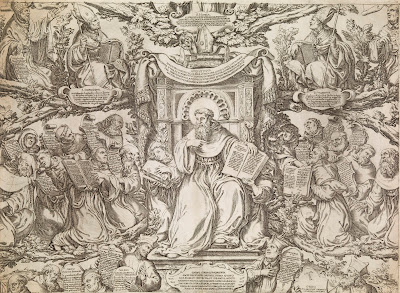 Wellcome Library no. 32491i (plate 8 of the Arbor augustiniana)

In the centre of Gatti’s composition, Saint of Augustine of Hippo sits holding the Rule of his Order (above), while around are representatives of the sacred and knightly orders associated with him, saints and martyrs, and eminent Augustinian friars and nuns, including his mother, Saint Monica.

Giles of Rome appears no fewer than three times: once as a bishop, once as a cardinal-archbishop (left: Wellcome Library no. 32476i), and once among those who renounced a princely or royal title to become an Augustinian hermit: Giles of Rome was widely believed to be a member of the Roman noble family of Colonna, though the truth of this has been doubted. [3] A full analysis of the work is of course beyond the scope of this posting, but the prints themselves are available in the Wellcome Library to anyone wishes to study them, or indeed just to enjoy the brio of their draughtsmanship.

If we turn back from the Augustinian Order to Saint Augustine of Hippo himself, in addition to the many graphic representations of the saint the Wellcome Library has an oil painting, the subject of which has recently been identified by Mr Roberto Tollo in the course of his studies of Augustinian iconography. The painting is painted on a large sheet of copper (69 x 85.7 cm.) and was acquired by Sir Henry Wellcome in Granada in Spain in 1934. 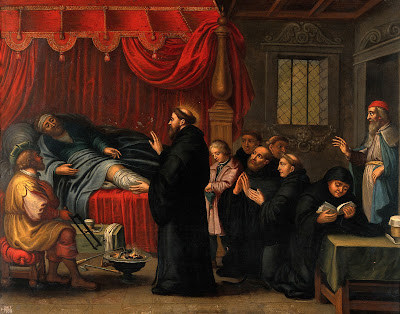 The copper support, the Spanish provenance, and the costumes in the painting (similar to those in paintings by the Antwerp painter Frans Francken II) together suggest that this is a Flemish painting made in Antwerp in the mid-seventeenth century and painted on copper for export to Spain or Latin America. Paintings on copper travelled well, and once exported, could serve as models for larger paintings on wood or canvas for display in the churches, hospitals and convents of Spain and New Spain. [4]

Mr Tollo has now confirmed this by pinpointing the exact source of the composition as an engraving by the Antwerp artist Schelte Bolswert (1586-1659), apparently after his own design. That Schelte Bolswert‘s prints of Augustinian iconography were popular in the Hispanic world we know from the painted versions of them that have been found in Seville, Madrid, Quito, and Lima: the evidence is given in the Wellcome Library catalogue.

The subject derives from an episode in Carthage in the year 388, described by Saint Augustine himself [5]. The man in bed on the left is Innocentius of Carthage, who suffered from a rectal fistula, and was about to be treated for it by a painful surgical operation: in Augustine’s words, “curabatur a medicis fistulas quas numerosas atque perplexas habuit in posteriore et ima corporis parte” (he was being treated by doctors for the many and difficult fistulas which he had on the posterior and lowest part of the body). However, for reasons of propriety, Schelte Bolswert shows the patient instead with a bandaged leg which a surgeon is expecting to amputate.

The surgeon, dressed in early 17th-century clothes, is sitting nearby with a brazier full of cautery irons – red-hot irons for sealing blood vessels — and, on a table, an amputation knife for cutting the flesh around the bone: the surgeon’s instruments are described in Augustine’s account as “tremenda ferramenta“. In the centre, blessing Innocentius, Saint Augustine is portrayed as a tonsured friar. Beyond him is a group of hermits of Saint Augustine, kneeling in prayer. Innocentius believes himself to be cured by a modern miracle without surgical innovation, and the surgeon almost lets go of his amputation-saw in surprise. On the right, a “marvellous Alexandrian surgeon” mentioned by Augustine as having been called in as a consultant raises his hand in an expression of astonishment, as well he might. He here represents those who assumed that miracles ceased in post-Biblical times, an assumption challenged by Saint Augustine from his own experiences. Augustine‘s message is that even eminent consultants cannot afford to take anything for granted.