Franz Anton Mesmer (1734-1815) was the promoter of a form of animal magnetism (named Mesmerism after him), at first in Vienna (1773-1777) and subsequently in France (1778-1784). His unique selling point was the supply of mesmeric fluid that served to rebalance the magnetic polarity of the animal body. His doctrine was one of many that sought to bring the animal body (the microcosm) into harmony with the larger world outside (the macrocosm). Such doctrines have a long history, from Hippocratic aphorisms about the effects of weather on certain temperaments to our contemporaries’ warnings about asthma, allergies and air pollution.

As a therapist, Mesmer, like other innovators (James Graham, Edward Jenner, John Brown etc.) offered his therapy outside the established world of academia, the court, and the royal colleges. Indeed, they sometimes came into conflict, as Mesmer did in Paris. Both his popular appeal and the disdain of the establishment brought him publicity of commercial value. 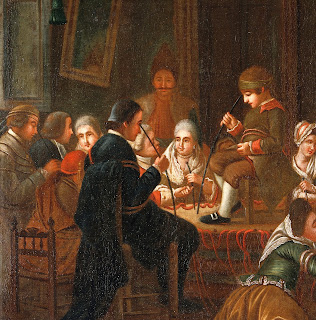 Hence the many depictions of his therapeutic sessions. One of them is shown in an oil painting in the Wellcome Library (above). The patients are seated around Mesmer’s baquet, a large flat drum containing mesmeric fluid. Pipes, tubes and cords emerging from the drum could be applied to the affected parts: one man on the far left is winding a cord doused in mesmeric fluid around his head, while several others are applying the ends of the tubes to their eyes (detail left). A woman in Turkish dress in the centre foreground is treating the eye of a child to a dose of the mesmeric fluid. 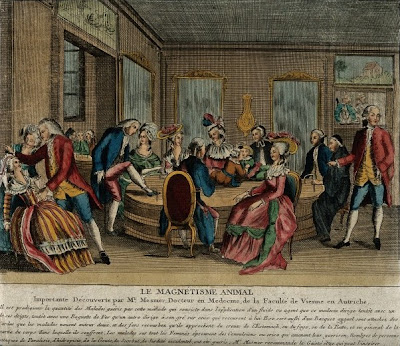 While oil paintings were seen by few, prints were seen by many, if only in the shop windows of print-sellers and stationers in the high streets of towns and cities. Among several prints of mesmeric therapy in the Wellcome Library is this coloured engraving of Mesmer in Paris (above), with text below describing the scene (Wellcome Library no. 17918i). It shows one gentleman resting his right foot on the drum so that mesmerism can be applied to his shin. There is also a view through to a second baquet in a room off at the left.

Until today, the catalogue description of this print made no mention of any of the authors (artist, designer, engraver or publisher) of this print: it was by an unidentified hand.However, Sotheby’s have in their forthcoming drawings sale in New York a pair of drawings attributed to the artist Claude-Louis Desrais (1746-1816), and one of them (Sotheby’s Old master drawings, New York 25 January 2012, lot 123) is the original design for the Wellcome Library’s coloured engraving. Indeed Sotheby’s say in their catalogue record that this drawing and a similiar one by Desrais were “probably intended for prints or book illustrations as they are reddened on the reverse”. However, as the Wellcome Library print is much cruder in execution than the drawing -– Sotheby’s drawing has much finer detail — there may have been an intermediary print or drawing from which the Wellcome Library’s engraving was copied. An impression of the same engraving is also in the National Library of Medicine, Bethesda, Maryland, and no doubt there are others elsewhere. 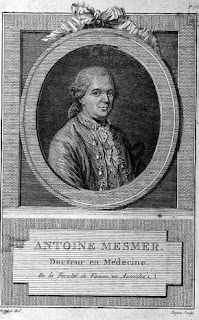 The attribution to Desrais on stylistic grounds is satisfying because Desrais is known to have produced a portrait of Mesmer (left: Wellcome Library no. 23327i). If he was Mesmer’s in-house image-maker, then, although he does not seem to be recorded as an oil-painter, could the Wellcome Library’s painting also be by him? It does look like the work of someone unaccustomed to such a cumbersome medium.

The other drawing at Sotheby’s (same sale, lot 124) shows a woman standing within a circular knee-high cage surrounded by three men in animated conversation. Another man (left) seems to be turning up a gas light, while on the right a demonstration is taking place of a closed vessel on a column. Perhaps someone familiar with public demonstrations of natural philosophy in Paris at this period can identify the event? It should be dated not later than 1816, the year of Desrais’s death.